PHOENIX, AZ – Following the announcement of the Dobbs decision by the US Supreme Court on January 24 ending the right to federal abortion, protests and rioting broke out all around the nation. In Phoenix, far-left rioters trapped lawmakers conducting “the People’s work” inside the Senate building, prompting a heavy response from police.

According to Republican Arizona State Senator Kelly Townsend, the incident turned into a hostage situation when lawmakers were instructed to stay inside the building. In the video below, protesters can be heard banging on the glass of the building yelling at the lawmakers inside, who were told to stay upstairs to avoid harm in case of a breach of the door. Hundreds of protesters were present.

“We are currently there being held hostage inside the Senate building due to members of the public trying to breach our security,” Townsend tweeted during Friday’s incident. “We smell tear gas and the children of one of the members are in the office sobbing with fear.

“I expect a J24 committee to be created immediately.”

Police arrived on scene and set off tear gas to disperse the unruly crowd.

“Crowd was dispersed with tear gas.” Rogers later tweeted. She added that the protests were still occurring and called the situation “very dangerous.” She also said, “We are safe inside… God bless law enforcement.”

“While working inside we were interrupted by the sound of bangs and smell of tear gas,” Representative Sarah Liguori tweeted Friday. “Protestors cleared from the Capitol.”

Eventually, lawmakers said they were headed to a “secure room” to be able to continue their duty and vote.

When the situation was deescalated, Arizona State Legislator Warren Petersen tweeted [1], “Feeling safe at the Capitol as I sit by 3 of my fellow senators who are armed.”

Violence and rioting occurred in other places across the nation as well. Watch below to see a compilation of just some of day one of a post Roe V Wade world.

The Arizona Senate Republicans released a statement following the incident. 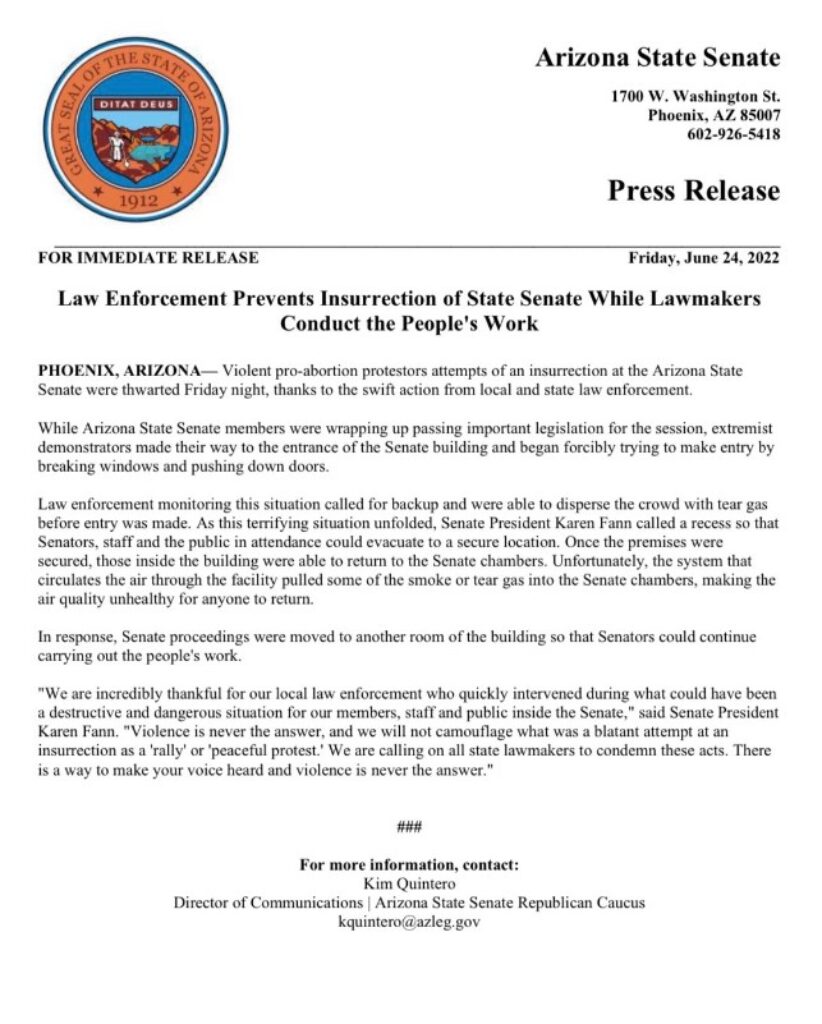 Kim Quintero, the Republican Caucus’ communications director, said, “Violent pro-abortion protestors’ attempts of an insurrection at the Arizona State Senate were thwarted Friday night, thanks to the swift actions from local and state law enforcement.

The statement said that the incident occurred while Senate “members were wrapping up passing important legislation for the session, extremist demonstrations made their way to the entrance of the Senate building and began forcibly trying to make entry [to the building] by breaking windows and pushing down doors.”

“We are incredibly thankful for our local law enforcement who quickly intervened during what could have been a destructive and dangerous situation for our members, staff, and public inside the Senate,” said Senate President Karen Fann. “Violence is never the answer, and we will not camouflage what was a blatant attempt at an insurrection as a ‘rally’ or ‘peaceful protest.’ We are calling on state lawmakers to condemn these acts.”