WASHINGTON, DC – Disgraced Republican Rep. Adam Kinzinger is managing to alienate the conservative base yet again, likening Republican Rep. Lauren Boebert to being part of what he calls the “Christian Taliban.”

On June 29th, Rep. Kinzinger took to Twitter, sharing an article about Rep. Boebert becoming frustrated with the tired sentiment of the separation of church and state, captioning the Twitter post with, “There is no difference between this and the Taliban. We must [oppose] the Christian Taliban. I say this as a Christian.” 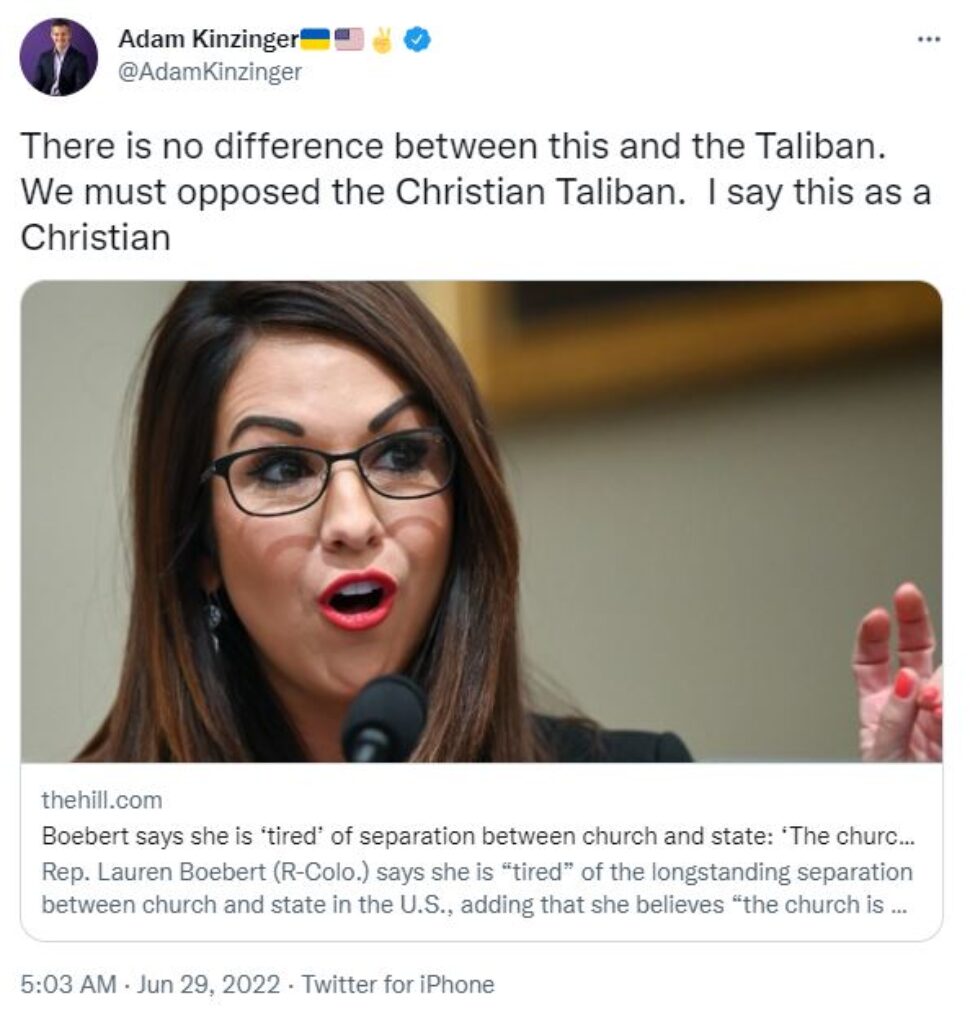 In the article shared by Rep. Kinzinger, it references a speech by Rep. Boebert delivered before the Cornerstone Christian Center in Basalt, Colorado, in the days leading up to her primary victory.

During the address, Rep. Boebert stated, “I’m tired of this separation of church and state junk — that’s not in the Constitution. It was in a stinking letter and it means nothing like they say it does.”

Rep. Boebert’s remarks are accurate in the sense that the concept of the separation of church and state is not found in the Constitution. In reality, the aforementioned concept was derived from the Bill of Rights, specifically the establishment clause, which in part reads, “Congress shall make no law respecting an establishment of religion.”

Come 1802, then-President Thomas Jefferson had written a letter to the Danbury Baptist Association in Connecticut, where he wrote in the letter that the American people had erected “a wall of separation between Church and State.”

Since the drafting of the abovementioned letter, a myriad of interpretations have been spun up regarding what the separation of church and state means, with interpretations often impeding on what some would characterize as religious freedoms.

Recently, the Supreme Court made advances against hardline interpretations of the Jefferson letter and establishment clause, much to the dismay of Democrats and anti-Christian zealots.

Going back to Rep. Kinzinger’s Twitter post, it unsurprisingly resonated with the liberals while irritating conservatives – namely because it reaffirmed the anti-Christian biases of the far-left while also furthering the narrative that there is some kind of existential threat from Christianity.

One Twitter user shot back at Kinzinger, writing, “She’s more American than you are. I say this as an American. You’re out of line , you know damn well what the Taliban does.” 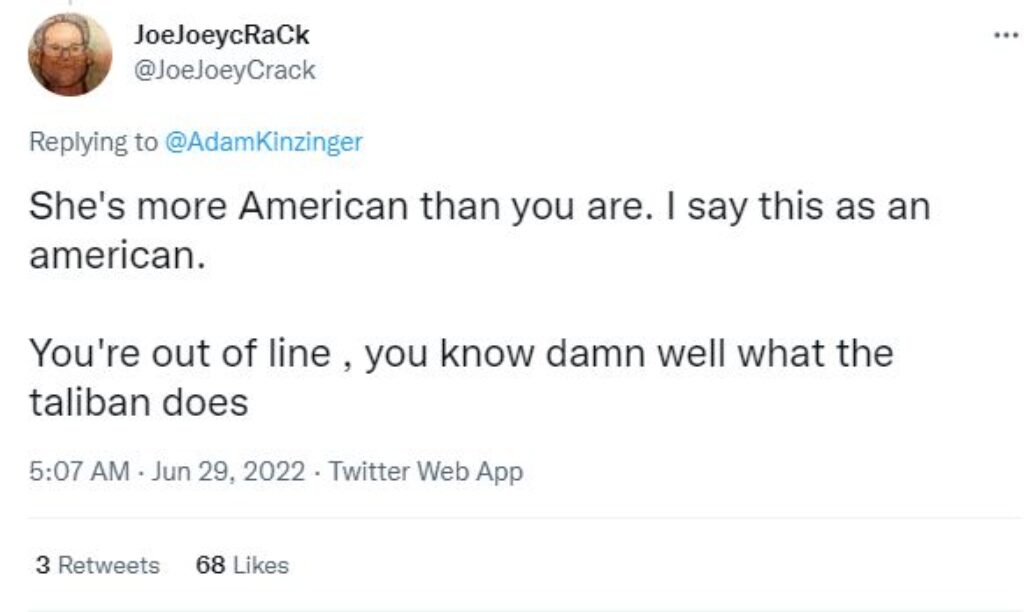 Hyperbolic comparisons to the Taliban has become sort of a thing with the far-left as of late, as well. Recently, Red Voice Media reported on actress and singer Barbra Streisand proclaiming that the Supreme Court is “the American Taliban” due to believing the court reached the decision of overturning Roe v. Wade via “religious dogma.”

Of course, nothing of this recent crusade to call everything conservative tantamount to the Taliban is rooted in any factual comparisons – as there has yet to be anything remotely in the realm of Taliban-like tactics or practices coming from Republicans.