WASHINGTON, DC – What was touted by the House select committee investigating the January 6 incident at the Capitol as a “bombshell witness” turned out to be more like one big dud – and this star witness’ testimony managed to be refuted in less than 24 hours’ time.

Cassidy Hutchinson, an aide to former White House chief of staff Mark Meadows, testified before Congress on June 28th, telling a tale consisting of a second-hand account about Trump becoming so angered at a Secret Service agent on January 6th, 2021, that he “reached up toward the front of the vehicle to grab at the steering wheel” when this Secret Service agent wouldn’t take him to the Capitol.

Hutchinson claimed she was told about the alleged incident involving Trump by then-White House deputy chief of staff Tony Ornato, with Hutchinson further claiming that Presidential limo and SUV driver Robert Engel was the Secret Service agent involved in this incident.

The White House aide testified that Ornato told her that Trump said to Agent Engel, “I’m the fucking president, take me to the Capitol now,” and that he even assaulted the Secret Service agent.

The alleged assault, the grabbing of the steering wheel, Trump’s purported comments, and the allegation that Ornato told Hutchinson all this is evidently untrue, as the parties alleged to be part of this – Ornato and Agent Engel – are willing to testify that the whole story is false. 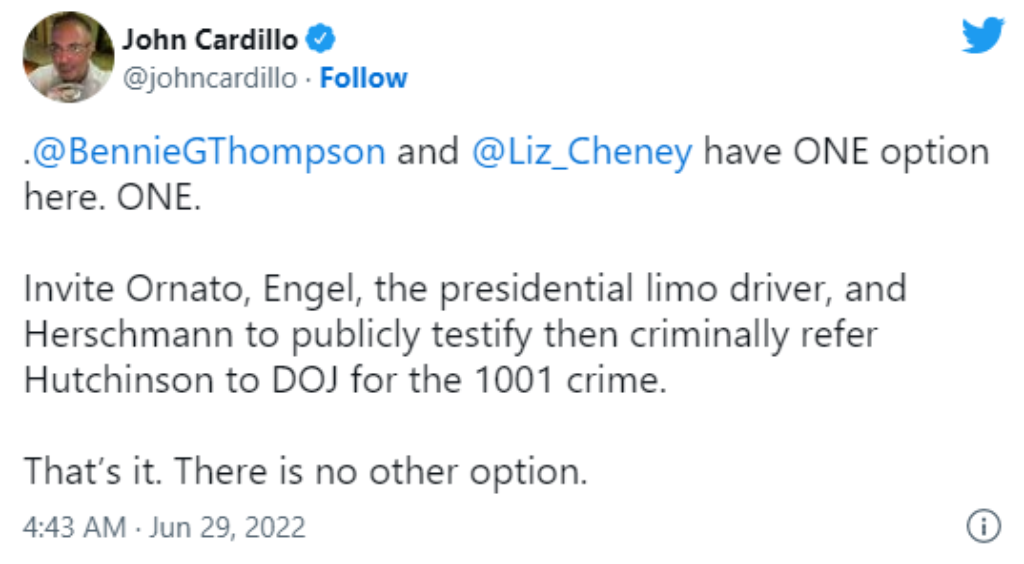 Even CNN reported that “Ornato denies telling Hutchinson that the former President grabbed the wheel or an agent on his detail,” and that the Secret Service reached out to the House select committee to inform them they’ll “make the agents involved available to testify under oath” and “are also prepared to say under oath that the incident itself did not occur.”

Talk about one giant swing ‘n’ a miss debacle by the January 6 committee.

But the whole lying fiasco gets even more sordid, as the Secret Service just announced a huge flop regarding the testimony from Hutchinson, in that the House select committee knew Hutchinson was going to testify for ten whole days and not once did the committee reach out to the Secret Service about what she intended to say before Congress during the televised hearing.

But fabricating tales of Trump assaulting Secret Service agents weren’t the only breed of lies Hutchinson delivered in her testimony, as she also lied about claiming to have written a “note” to President Trump on January 6th that was actually written by former White House lawyer Eric Herschmann.

Even with the egg on the House select committee’s face in light of the lying witness, a spokesperson for said committee claimed they still trust Hutchinson’s “credibility.”

“The committee trusts the creditability of a witness who is willing to testify under oath and in public but is also willing to hear any and all information that others may have that would aid in their investigation.” 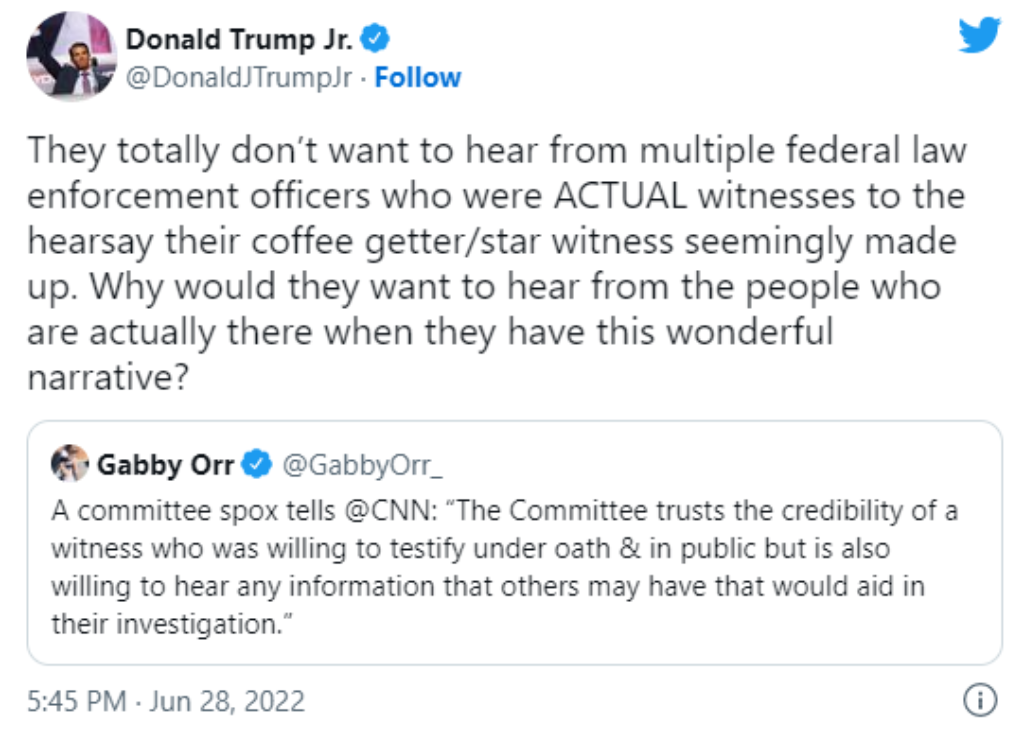 Breitbart News’ Joel Pollak doused those purported “bombshells” pretty quick in a piece slamming the L.A. Times’ ridiculous report, writing, “a list of what it called eight ‘bombshells’ — some of which were soon debunked, some of which remain dubious, and some of which were just a repetition of things that were already common knowledge or that other witnesses had already told the investigation.”

What Hutchinson’s testimony has further showcased is the circus that is the January 6 committee and hearings, providing more evidence that the charade is a witch hunt rather than anything remotely unbiased or objective.

Fox News host Greta Van Susteren provided a prime example of this kangaroo court masquerading as a congressional hearing, sharing a photo taken from the hearing where Hutchinson testified, which showed her and Liz Cheney hugging.

Susteren took to Twitter about the photo, writing, “If questioner (Cheney) wants to appear fair to jury (American people), it probably is not a good idea to get caught on camera hugging the witness…see below from [Politico]; already people have very strong feelings – both ways – about this hearing and pics like this don’t help.” 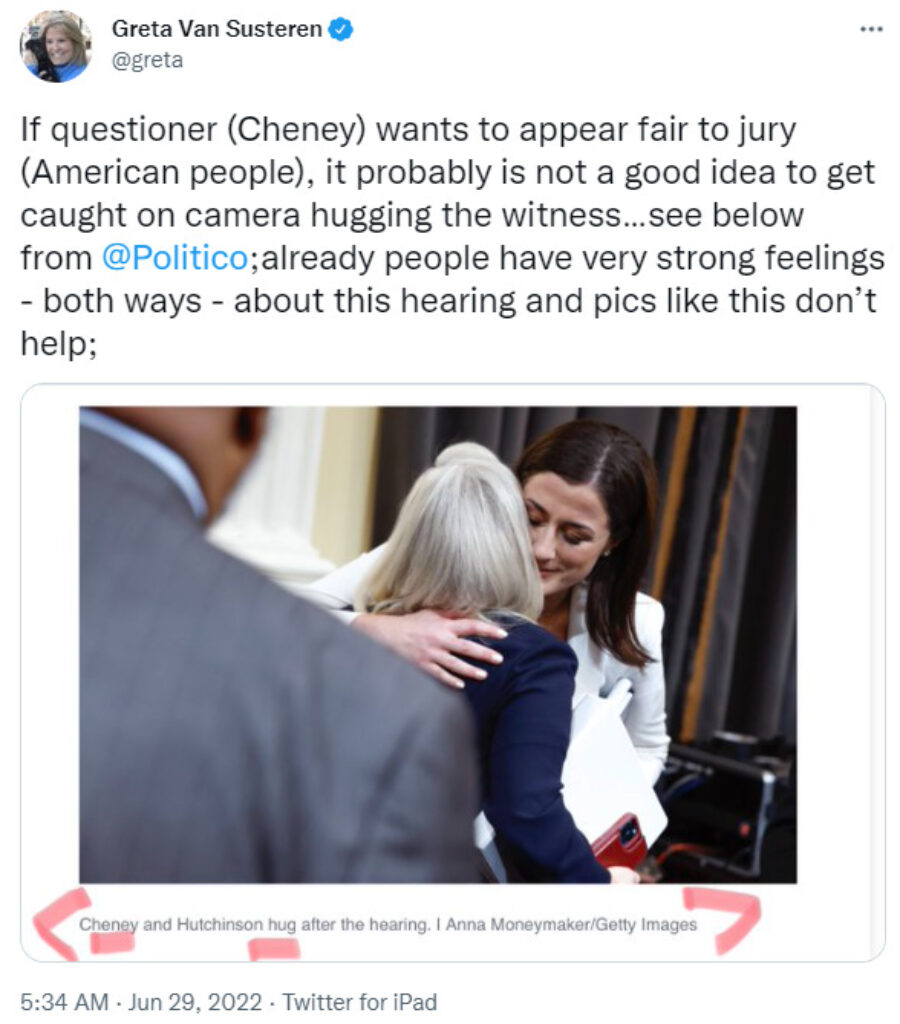 Trump spokesperson Liz Harrington recently addressed the nonsensical fabrications doled out by Hutchinson, rhetorically asking what these forces behind this charade are “trying to distract us from.”

“They’ve got a really big problem if the likes of CNN and NBC News are even saying, ‘You went a little too far on this.’ I think the bigger question is why are they…what are they trying to distract us from? How is this an emergency hearing when your star witness is a 25-year-old swamp social climber who literally said a bunch of lies that are just Google-able in about two minutes?”

Former President Trump had some words to share regarding Hutchinson’s testimony before Congress, saying, “Her Fake story that I tried to grab the steering wheel of the White House Limousine in order to steer it to the Capitol Building is ‘sick’ and fraudulent. Wouldn’t even have been possible to do such a ridiculous thing.”

That is all this Clown Show called the J6 Committee have are LIARS and Fake accusations! I am waiting for the day that we can drag these J6 Committee Cockroaches out to the streets and hang them from the nearest lamp posts, as Traitors should be treated! Or love to see a MOAB dropped on the J6 Committee and wipe every one of them out. And guess what, none of them would be missed at all and it would be more of a Blessing on our Republic than anything else. FJB! FJ6Kangaroo Court! FDemocrats!

Clown show by a bunch of clowns FJB.

Like Christine Ford in the Kavanaugh fiasco, this useful idiot does not come across as knowledgable or genuine. Bought and paid for by the DNC.

Kangeroo Court of witch hunters. They are neither fair nor just. It’s what tyrannous governments do when they are run by psychopaths and sociopaths.