Is there anything she can do?

There is no denying that Vice President Kamala Harris, much like President Joe Biden, has had a difficult time when it comes to her role in the White House. Not only has Harris failed to capture the support of the American people, but when it came to key issues like the Southern border crisis, the Vice President more than failed to address the issue, hordes of migrants continue to cross.

With her approval rating sinking into the 30s, on Wednesday, Harris attended an event celebrating the 50th anniversary of Title IX and hoped a video of her hitting a basketball shot would impress voters. The only problem, like most of the Biden administration, the entire story wasn’t shown.

In the video, which is featured below, Harris is shown sinking a basket as the crowd around her, which included her husband Douglas Emhoff. Apparently, it didn’t matter that the Vice President was only a few feet from the basket. But as mentioned above, while Harris did make the shot eventually, it took her six tries.

While the video of Harris was originally uploaded by her aide, Opal Vadhan, another version was later shared by the Republican National Committee on Thursday and it painted an entirely different scene as people waited for the Vice President to make the basket. 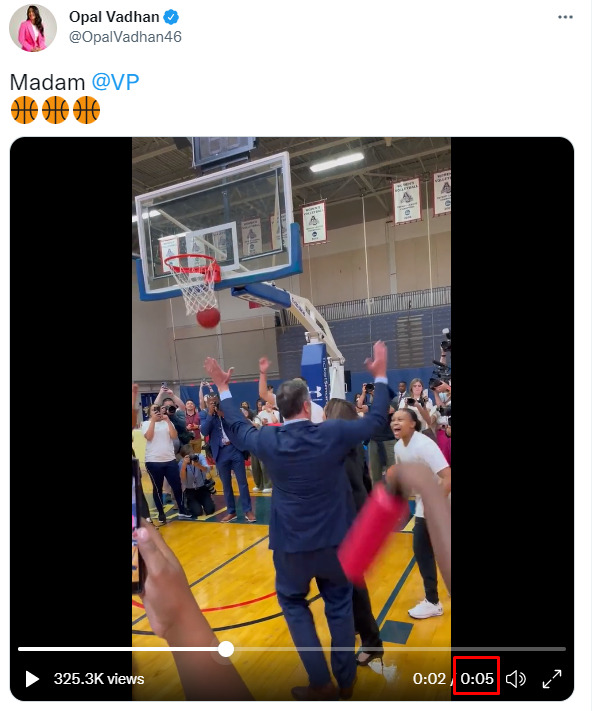 For those wondering what exactly Title IX is, according to the Department of Education, “No person in the United States shall, on the basis of sex, be excluded from participation in, be denied the benefits of, or be subjected to discrimination under any education program or activity receiving Federal financial assistance.”

Users online shared their thoughts, writing, “VPs office knows nothing about PR. Could have just showed the whole video which is actually fun to watch and something most of us can relate to. Instead, they had to hide it and edit it to make her look like a great shot, thus making her look deceptive.”

What’s hilarious is that she didn’t succeed until a white man showed her how.

Willie Brown knows there is at least one thing Kamal-ho can do. She probably told him the same thing, “we might have to be here all night.”

What a dud–They say she cackled all the way home????

This is hard evidence that she is not black as she claims!

Why give it attention, it’s not like it helps, it’s less than not helpful.

As opposed to what? Dam Straight! Show this Fool’s FOULies! Highlight and ShowCase this on the Nightly News!!! God Dang Idiots, I SWEAR I can’t take much more of this SHIT!!!