Leftists Viciously Bully Barron Trump, 16, Over His 6ft 7in Height

Barron Trump, the 16 year-old son of former President Donald Trump, is sadly being cruelly trolled online by leftists who are making fun of him for his height of 6 feet, 7 inches.

Barron found himself being targeted by social media attacks after a photo of him at Mar-a-Lago last year went viral over the weekend. The photo shows Barron towering over an unidentified woman in an image that showcases just how tall the teenager really is. 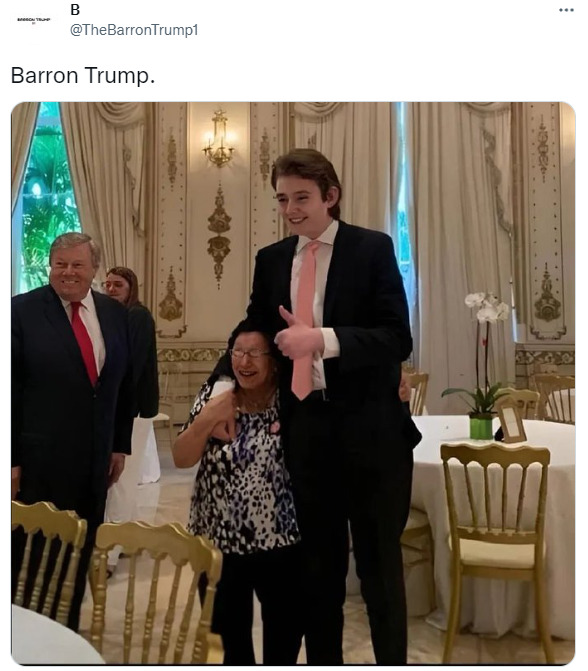 “Looks very weird,” one person wrote, according to The Sun, with another adding, “Barron Trump looks like two kids in a trench coat.”

“Barron Trump is literally SpongeBob when he goes to the dance lol,” wrote another user, with another saying, “Has anyone ever had him checked for a growth disorder? No one in their family has that type of height. I’d be concerned.”

Though Barron is affectionately known to his family as “Little Donald,” he actually towers over his 6 ft. 3 in. father. He made few public appearances during his father’s presidency and presidential campaign, as his mother Melania was determined to shield him from the public and give him as normal of a childhood as possible.

Barron is the tallest of the Trump children, with his brothers Eric being 6-foot-5-inches and Donald Jr. being 6-foot-1. His sisters Ivanka and Tiffany are 5-foot-11-inches and 5-foot-8-inches, respectively.

After moving out of the White House, Barron’s parents enrolled him Oxbridge Academy, a $38,000 a year West Palm Beach, Florida school in August of 2021. The school was founded by was founded by William I. Koch, a member of the Koch family.

Before Barron enrolled, parents of students at the school were informed that the Secret Service will be on the campus with him.

“They want to have little impact on our day-to-day operations,” the school said of the agents. “They’ve done this for other former presidents’ kids. They’re fantastic.”

In 2015, Melania said that Barron enjoys playing sports, and that he is a “very strong-minded, very special boy.”

“He is independent and opinionated and knows exactly what he wants,” he added.

Barron will be graduating from high school in 2024, which could be a pivotal year for his family, should his father decide to run for president again. Trump has said that he will likely be revealing whether or not he will be running after the midterm elections later this year.

This piece was written by James Sampson on June 24, 2022. It originally appeared in RobManess.com and is used by permission.

Rob Maness is a retired Air Force Colonel, a former wing and squadron commander, veteran of the Iraq and Afghanistan wars, a survivor of the 9/11 Pentagon Attack, Executive Director of Military-Veterans Advocacy, and Host of the Rob Maness Show on LifeZetteTV.

That picture is photoshopped, and very badly, I might add.

If you say so…

P.S. I made it with Canva

Lol…I’m not talking about Barron’s height. I’m talking about the specific picture in this article. Who s smooshed Donald Trump into a Munchkin, and made him a hell of a lot shorter than 6′ 3″ ?

Im sure Barron Trump doesn’t give a dam what iodiots think , go and say your smart arsed comments to his face -I hope he smashes your teeth in. Barron is a boxer and a Martial Arts expert so he would laugh at all pathetic nasty comments and walk away …Id love to be 6′ 7″ Barron will be a warrior