Republican Representative Adam Kinzinger was clearly peeved that Fox News wasn’t planning on airing the January 6 committee hearings on the network, venting his frustrations on Twitter [1] while urging journalists for the network to resign in protest.

On June 6th, Rep. Kinzinger had retweeted CNN’s Brian Stelter, who’d framed Fox News’ decision to not air the January 6 committee hearings over the immensely popular program Tucker Carlson Tonight as some sort of travesty, writing, “Fox News makes it official: It will NOT show Thursday’s 1/6 hearing like all the other major networks. Tucker Carlson’s show will air as usual. Carlson promotes conspiracy theories about the riot, calls the committee ‘illegitimate,’ and ridicules the committee members.”

Piggybacking off of Stelter’s outrage that a competing network isn’t following suit, Rep. Kinzinger wrote, “If you work for [Fox News] and want to maintain your credibility as a journalist, now is a good time to speak out, or quit. Enough is enough.” 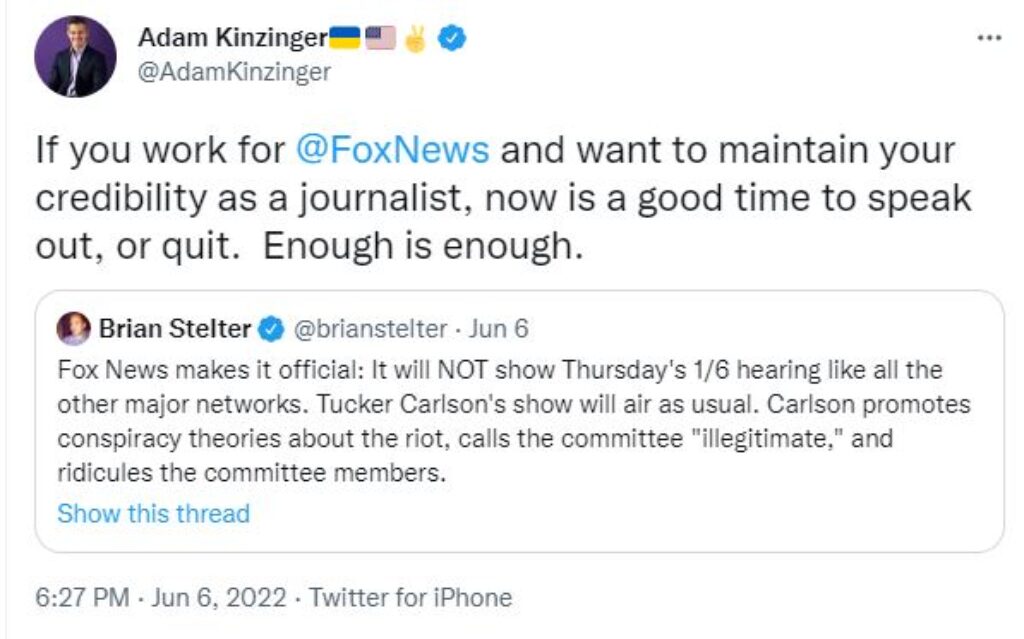 The House select committee hearing slated for June 9th pertaining to the Capitol incident from January 2021 are seemingly poised to be used as a springboard to generally denigrate Republican officials, and arguably their constituents as well.

Speaking with the New York Times [2] earlier in June, Democratic Rep. Sean Patrick Maloney claimed that, “When these hearings are over, voters will know how irresponsibly complicit Republicans were in attempting to toss out their vote and just how far Republicans will go to gain power for themselves.”

Some speculate that these hearings are nothing more than “political theater [3]” to be used as fodder to help soften the expected blow Democrats may endure in the upcoming midterm elections.

Even the New York Times admitted these televised hearings are expected to consist of “carefully choreographed” sort of exposés among the six hearings to be broadcast, likening it to a Democratic strategy “to persuade voters that the coming midterm elections are a chance to hold Republicans accountable.”

The Biden administration, and Democrats in general, have faced mounting levels of scrutiny since Biden stepped into office between a botched exit from Afghanistan, soaring inflation, and ever increasing gas prices – and Democrats seem to be betting on a ‘remember January 6th’ strategy to save them in the midterms.

Anat Shenker-Osorio, who founded the leftist political consulting firm ASO Communications, is among those who believe these hearings could be juts the thing to sway swing voters in the upcoming midterms, telling the New York Times, “January 6 is very much salient and highly negative to these likely midterm voters.”