They have no answer for this...

WASHINGTON, DC – Earlier in June, Washington Commanders defensive coordinator Jack Del Rio called out the hypocrisy over the reaction to the January 6th incident at the Capitol in comparison to how officials reacted to the riots that played out every single day during the summer of 2020.

Del Rio was asked about comments he made on Twitter that were in response to the upcoming hearings regarding the incident at the Capitol in January of 2021, where he asked, “Would love to understand ‘the whole story’ about why the summer of riots, looting, burning and the destruction of personal property is never discussed but this is???” 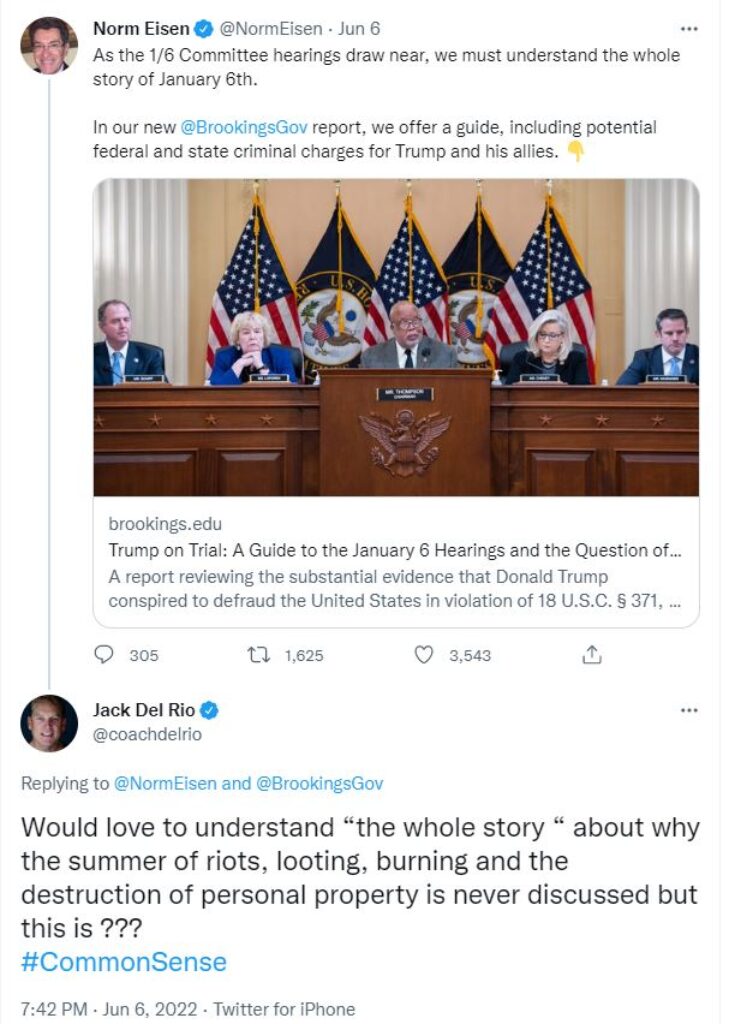 The aforementioned post to Twitter wound up incensing the pro-BLM crowd who attempted to explain away that those 2020 riots were permissible because George Floyd died and the ilk. Predictably, Del Rio was asked by reporters on June 8th about his Twitter comment, where he stood by the validity of his question.

“Want to talk about it? I’ll talk about with anybody. Yeah, no problem – at any time, but they’re not. I’m just expressing myself. And I think we all as Americans have the right to express ourselves, especially if you’re being respectful. I’m being respectful. I just asked a simple question.”

MORE NEWS: Working-Age Folks Disappearing Out of Nowhere: You Can’t Blame This on COVID or Missed Cancer Screenings

Del Rio continued from there, scoffing at how people manage to muster up faux outrage over legitimate questions – questions that are worthy of answers since livelihoods were literally destroyed during the summer of 2020.

“No problem. And then we have a dust up at the Capitol. Well nothing there burned down. And we’re not going to talk about – we’re going to make that a major deal. I just think it’s kind of two standards. And if we apply the same standard, and we’re going to be reasonable with each other, let’s have a discussion. That’s all it was. Let’s have a discussion. We’re Americans, just talk it through. I’m for us having a great opportunity to have a fulfilled life. Like I said, every which way I can, when I’m here, it’s about love and respect.”

While a considerably reasonable response to the inquiry, Del Rio managed to catch flack later on after delivering the response to journalists – this time for him referring to the incident at the Capitol as a “dust up.”

Likely being compelled to, Del Rio issued an apology for referring to the Capitol incident as such, stating, “I made comments earlier today in referencing the attack that took place on the United States Capitol on January 6, 2021. Referencing that situation as a dust-up was irresponsible and negligent and I am sorry.”

However, Del Rio didn’t completely backpedal his comments over the January 6 hypocrisy, adding in the released statement, “I stand by my comments condemning violence in communities across the country. I say that while also expressing my support as an American citizen for peaceful protest in our country. I have fully supported all peaceful protests in America.”

MAN, for once I wish someone with a platform like this guy would just say NO I’m not apologizing. What I said is the truth and if you don’t like it too bad. The whole premise of G.Flloyd is BS. Those “activists” where paid to cause those riots. Flloyd was a convenient excuse. Listen to Catherine Austin Fitts. (Greg Hunter/USA Watchdog). She shows how burning down the city was done on purpose so the big corps could buy up the real estate cheaply. And the liberal, communist, governors, mayors went right along with it. It also killed some of the Trump – opportunity businesses. That’s a fact.
Someone needs to develop a set and stop apologizing.

You never apologize. Once you do that they know that you are vulnerable and they will continue to come after you. Why doesn’t the media report on the 2 people who did die, who were murdered that day in DC? Neither were police officers but both were in fact white women who were Trump supporters. Neither of them were armed with weapons. Rosanne Boylan was trampled to death and the Capitol police did nothing regarding first aid treatment to help her until it was too late. The other was brutally shot in the neck and died on the floor just outside the entryway to the speakers office. That video I saw in real time. Again the police there just stood by and allowed Ashli Bobbitt to bleed out. Yet the media last night in the lead up to the sham hearings still reported that 5 police officers died that day. Not a shred of truth in that. Ofc Bryan Sitnick, died due to having multiple strokes (gotta wonder if he was vaxxed prior since the injections were being given to federal employees who wanted them). The other officers in question committed suicide.

Apologize? How? The truth never changes, only the lies are changed.

I’m more concerned with the insurrection being carried in the White House than this dog and pony show.

how do feel about the insurrection that the same deep state pulled off,inNov.22..1963?

It was NOT an insurrection.

If it had been an insurrection you would have known it and you would be involved, like it or not. We’re not there just yet, Jake. There is no way this so-called committee will tell the truth about anything. They are not after the truth. They are a lynch mob. Look at what the current Administration has done to this country since Biden was inserted. Do you think his regime is about truth–mandates, kill-shots, riots, fake racism, sick-o Wokism, grooming children for sex/genital mutilation, the WHO, CDC, FDA refusals?

Please get a clue.

Wow! Suicide time for Jack Del-Rio, for questioning Democrat reasoning and motives, for Clinton associates have been suicided for-a-lot-less.

80 years ago, IT was only what HITLER said, that mattered. DEJA VU

Was great and on point till he gave in and apologized, never back down never give in. I am disappointed in Ron Rivera fining him 100K for HIS comments “we still live in America just not home of the free I guess” Rivera used to be a standup guy and now is just another Liberal Hater like Petey boy Carroll.