“What’s good, guys? How’s it going, everybody? It’s been a minute, haven’t streamed in a minute, you know, busy, busy, very busy we’re building. But how to take some time tonight to chat about the mainstream media attack on Gab and on Doug Mastriano.” – Andrew Torba [1]

“We must be doing something right because the entire Democratic mainstream media machine is after us again. And, of course, what is their strategy? What is their strategy this time? It’s the same strategy that they’ve been using for six years now. It’s the call us racist. Will it work this time after six years of calling us racist? Is it going to work this time? Will this be the time that it finally takes Gab down? I guess we’ll just have to wait and see. You know this is the thing is that this is Art of War, right? And maybe I shouldn’t say this because I don’t want to. I don’t want to eliminate the perception, right? Perception is reality. Currently, our enemies perceive us as this small, insignificant website. But the reality is, is that Gab gets 10s of millions of visitors each and every month. Okay. And that’s a threat to their power. And it’s just that simple.” – Andrew Torba [1]

“You know what all the other mass shooters are were on Facebook. They’re on Twitter. They’re on Twitch. They’re on YouTube, right? And yet, when these media outlets talk about these platforms, they don’t talk about that, right? They don’t. The context of starting the conversation about these platforms is never, you know, oh, there’s child pornography and human trafficking on Facebook and Instagram. Right? Facebook and Instagram, the platform famous for human trafficking and for, you know, underage pornography and for all sorts of demonic, degenerate content and evil people, live stream suicides, live stream murders all the time. This is commonplace on these platforms, and they never bring that up.” – Andrew Torba [1]

Sources referenced by Andrew Torba [1] in the video above: 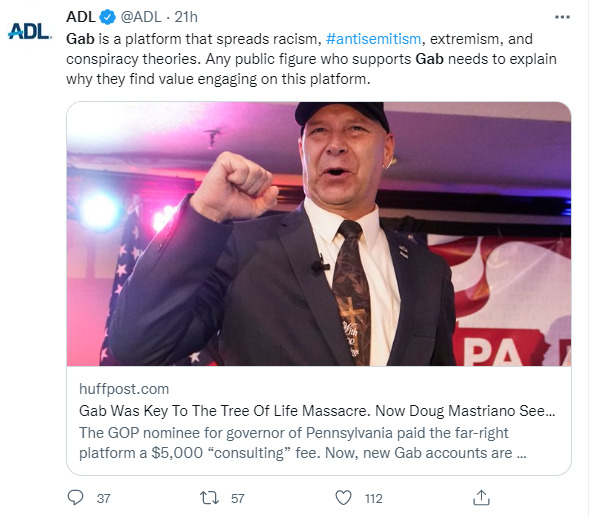 Huffington Post: Gab Was Key To The Tree Of Life Shooting. Doug Mastriano Seems To Be Paying It For Followers. [4]

Rolling Stone: Trump-Endorsed Candidate Appears to Be Paying for Followers on Extremist Platform [5]

Gab News: If You Are a Christian You Need To Be Supporting Doug Mastriano’s Campaign [7]