They couldn't stand the heat... they got out of the kitchen

DALLAS, TX – A couple of aggressive customers who patronized a Taco Bell location in Dallas in mid-June were reportedly doused with some boiling water by an employee after walking behind the counter. The two customers splashed in the incident have filed a lawsuit over the matter, with none other than Ben Crump representing the duo.

The incident reportedly occurred on June 17th, when two customers, identified by court records as Brittany Davis and her 16-year-old niece “C.T.,” had some kind of dispute with Taco Bell employees – undoubtedly over an order or general service rendered.

Moments after the aggressive customer attacked one of the employees, another Taco Bell employee douses the two women with what is alleged to be boiling hot water.

Famed ambulance chaser Ben Crump shared footage from the incident to Twitter after taking up the case, claiming that a Taco Bell employee also flashed a firearm at the two women and described his clients as being “innocent victims.”

“A recently released video shows a Taco Bell employee in Dallas, TX, throwing scalding hot water on Brittany Davis and a minor. When they fled the store, another employee flashes a firearm!

Why did these innocent victims have to suffer life-altering burns and psychological trauma over a TACO?! There’s NO excuse for the actions of the store employees & management. We need a full investigation into this violence & why an employee had a firearm on Taco Bell property!” 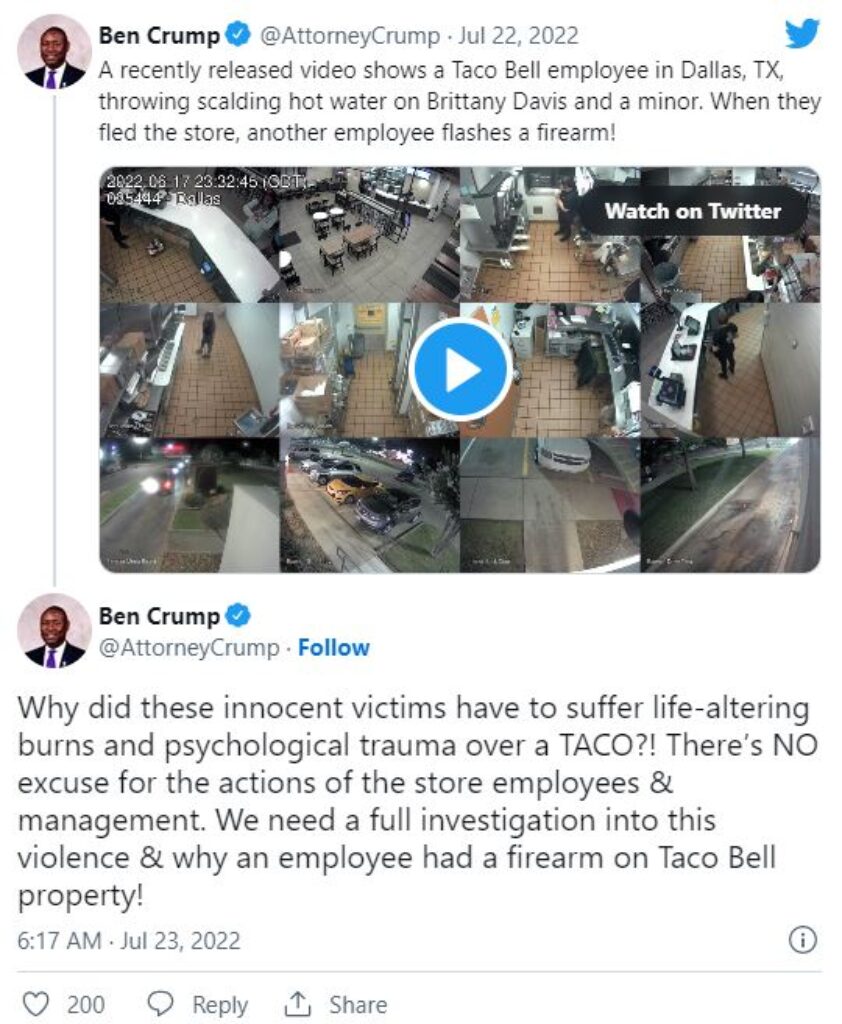 It should be noted that Crump’s clamoring about the employee who allegedly “had a firearm on Taco Bell property” is likely a non-issue, considering that over 90% of Taco Bell locations are franchises (which Taco Bell has confirmed this Dallas as one in response to the suit). Thus individual owners can craft their own policies around firearms.

Nonetheless, the lawsuit filed claims that the allegedly boiling water had soaked the clothing of the two women, both of whom had to seek treatment at an area hospital. Davis allegedly suffered ten seizures by the time she’d reached the burn unit and had “deep burns on her chest and stomach with significant damage to her brain function due to the seizures causing her to lose some of her memory,” according to the lawsuit.

As for C.T., the 16-year-old allegedly suffered “severe burns to her face, chest, legs, arms, and stomach.”

In a statement regarding the matter, Taco Bell noted they’re in contact with the franchise owner but wouldn’t directly address any of the specifics outlined in the suit, only saying they “take the safety and wellbeing of team members and customers seriously.”

what made them think it was a good idea to go back behind the counter? that was where they crossed the line. sorry but they got what they deserved. and crump, well he is a $ chaser nothing more cuz those girls are far from innocent. good luck in court, ur gonna have to pay to stack the jury box. and the truth always comes out.

This is what we get when we allow interaction out of our species.

Ya know how to prevent this? Don’t act like an ass all for a taco! Todays youth

Incapable. Of. Living. In. Civilization

Looks like self-defense to me, two go behind the counter to beat one up, and oh well.

Kids having kids. Guess who’s not coming to dinner. Violence negates violence. Black people are nuts. They are not victims. They aresociapaths that hate anyone a d anything that gets in their wat.

They had no business going behind the counter after the employees. GOD BLESS A FREE THINKING USA

…it was not “boiling water”. Water boils at 212 degrees. The water she threw at them was from a piece of equipment called a “Rethermalizer” which is a big pot of water that is usually about 170 degrees. Most Taco Bell ingredients come in frozen or refrigerated, and are then dropped in plastic bags into the Rethermalizer for various periods of time until the food reaches above 165 degrees…the temperature needed to insure safe food. Too bad the idiots came behind the counter violently. If I were the Owner / Operator I would defend the employees and my store…and claim self-defense. Let a jury listen to and watch the behavior of the two abusers. Not guilty.

Another grift by people who believe that they have additional rights beyond those of ordinary Americans . . . George Floyd, Juicy Smellit, Patrice Cullors, Hawk Newsom , , , etc , , , etc . . . The list goes on and on , , , and none of these slimy grifters have even an ounce of honor or dignity among them . . .

Bravo and damn well said. Pity that the cop involved with the F-lyoud pig has to do jail time…he should get a medal.

I know like every sociopath/demoncrats I didn’t do nuffin’ Guilty as sin Silverback.

Yep, pretty stupid on the part of those girls who went behind the counter and started pushing the workers around! They got what they deserved! The idea of people attacking fast food workers need to end! This is a great example!

They broke the law and now want to capitalize on it – 1st question in court is if they believe in capitalism? That would be a fun one to watch them try to answer. As for the lawyer, hope he’s pro bono cause those two probably living on mama’s dime and both look like they do not need any more fast food anyway – Bigger is not always a good thing – get what you give. Hope their mama spanks them but somehow I doubt it – their behavior is reflective of their upbringing.

They got what they deserved. These demons only pick on white people

So WHAT did the “customers” do to threaten the workers..??

Uh DUH – #1 Went behind the counter! #2 shoved the girl into the big machine behind her – oh let me guess you enjoy S&M or should someone do that to you. Sorry, but that’s the only way people with that response learn. When it does happen to you at your job (if you have one) I’m almost 100% positive you will cry workman comp or better yet let it be your child it happens to and my best guess is those little taxpayers will be footing the bill along with the rest of hard-working Americans for her/his life

Aaaand of course they are.

Go somewhere else if you don’t like the service, it’s that simple.

Crump looking for crumbs, what a loser.

Forgot – those 2 will be the ones in 10 years abusing the Amigos in the store while their crippled mama walks and puts the groceries in the basket. See it everyday and they will be shameless doing it just like they are shameless suing for being bullies.

To ben crump, because their mothers and fathers of the customers did not teach the children how to act.

When those two went behind the counter to harass the employee, that action ratcheted this enounter up a whole lot of notches. No audio was recorded, which is a shame, because for a crew member to risk their own job by tossing hot water on them means that the crew member felt that they and the rest of their crew were in physical danger and, to protect themselves, this crew member used the only weapon available.

What I learned:
Boiling water is quite an effective deterrent.

Cool…..and the steam makes them look like they are smoking when they run off!

If the employees had let the agressive clients get far into the kitchen then there would have been real life endangerment for the employees in case of a fight and shoving: french fries boiling oil, knives, burning meat grills.

Please let me on the jury….Ben Crump….Nothing but a grifting pimp.

Let’s talk about BAD PARENTING!!! PEOPLE NEED TO ME MENTALLY TESTED BEFORE THEY ARE ALLOWED TO HAVE KIDS, BECAUSE THIS IS JUST ANOTHER EXAMPLE TO BE HAD!!!!

Go! Go! Go! to the employee who thought quickly and fought back to prevent these Woketards from threatening their workspace and them. The rest is clearly ridiculous bull on Crump’s part. He’s defending Woketards in the WokeSM for the Wokers.

The suite is as stupid as the McDonalds hot coffee burn suit from decades ago which set the precedent for these idiots and their stupid asshat lawyer to sue over his clients being aggressive and threatening toward others.

Customers don’t EVER belong behind the counter. Were I an employee (or training one), if a customer crosses behind the counter uninvited, the rules change and they are some measure of a threat. Too bad they didn’t use ice water, but when people are threatened, they sure aren’t going to do nothing, right? ‘The way of the transgressor is hard’ says the proverb. Call their wounds tuition to the school of hard, learn your lessons ladies, and call it a day. May your petition to court be met with summary dismissal and a course completion certificate for “Staying in my lane when ordering fast food and not being a dumbass” class.