AOC Has Meltdown Over Being Heckled, Accidentally Makes Case For J6 Defendants [VIDEOS]

"Sexually threatening aggressive behavior..." But let me get closer and throw up a peace sign for the camera?

WASHINGTON, DC – On July 13th, Democrat Rep. Alexandria Ocasio-Cortez found herself being heckled by none other than comedian Alex Stein outside of the Capitol, which resulted in the congresswoman demonstrating a victimhood-laden meltdown online thereafter.

But amidst the congresswoman’s meltdown and bemoaning of police not intervening in the heckling, she inadvertently made a case for many January 6th defendants when recalling how Capitol Police officers were letting people into the Capitol on January 6th.

Anyone remotely familiar with comedian Alex Stein is likely already aware of his breed of trolling/comedy, which he dished out with a huge grin to Rep. Ocasio-Cortez outside the Capitol steps on July 13th when referring to her as his “favorite big booty Latina” who “wants to kill babies.”

In the video, Rep. Ocasio-Cortez gets closer to Stein while chucking up a peace sign and then continues up the steps.

However, it seems as though Rep. Ocasio-Cortez doesn’t like being on the receiving end of any sort of trolling, protesting or heckling – despite her having a history of ardently encouraging it when it’s being aimed at her political opponents.

Rep. Ocasio-Cortez had taken to Twitter shortly after the encounter, calling it “a deeply disgusting incident,” adding that she was upset to “work in an institution that openly allowed this” and bragged that she’d originally intended to criminally assault Stein but restrained herself.

“I posted about a deeply disgusting incident that happened today on the Capitol steps but took it down bc it’s clearly someone seeking extremist fame. It’s just a bummer to work in an institution that openly allowed this, but talking about it only invites more. Just really sad.”

Here is a video he posted of the incident. I was actually walking over to deck him because if no one will protect us then I’ll do it myself but I needed to catch a vote more than a case today.” 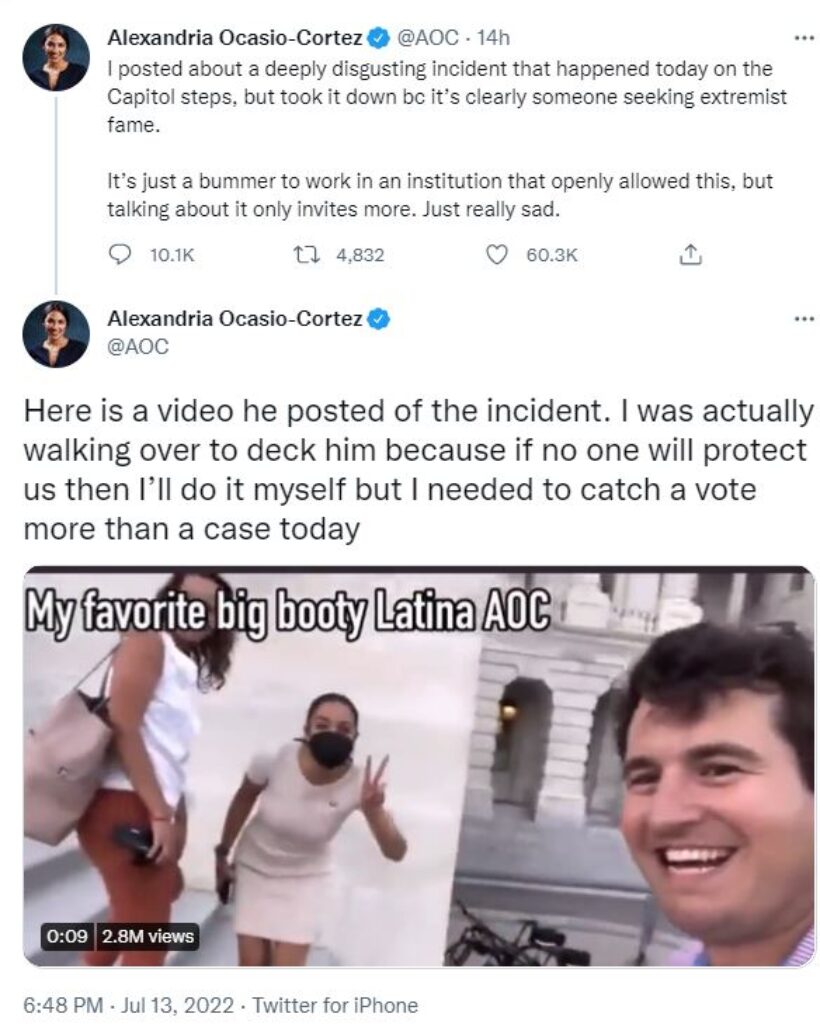 Later on that same evening, Rep. Ocasio-Cortez took to Instagram to upload a video of her complaining about the lack of action taken by Capitol Police with respect to the trolling done by Stein – asserting that what Stein was doing wasn’t any sort of “protest” or “political opinion,” but rather an act of “sexually threatening aggressive behavior.”

But what was rather intriguing in Rep. Ocasio-Cortez’s rant on Instagram was when she segued from her disdain with the particular Capitol Police officer not doing anything to Stein over to comparing it to how Capitol Police were seemingly inviting people into the Capitol Building on January 6th.

“I really just can’t help but think about all of that footage and evidence that we saw the day of all these Capitol Police officers helping and being sympathetic to the insurrectionists on January 6th, and everyone decided it was too politically difficult to deal with.”

Rep. Ocasio-Cortez again expressed these same sentiments when speaking to Latino Rebels reporter Pablo Manríquez, where she again branched off from detailing her earlier encounter with Stein and complained about the conduct of Capitol Police on January 6th, who were “opening the doors wide open.”

While Rep. Ocasio-Cortez likely didn’t intend to in her spate of dramatics, she affirmed much of the defense arguments levied by people who’ve been charged in connection with the January 6th incident at the Capitol – with many people saying they were seemingly invited in by Capitol Police officers opening doors and waiving/directing them inside of the Capitol Building.

To date, at least one January 6th defendant was fully acquitted because of the aforementioned defense of being invited in by Capitol Police.

Way to exonerate, AO! Thanks, now how about letting these political prisoners, who never EVEN have had a ‘speedy’ and fair trial out of your bullshit banana republic prison!!!!

We need THIS guy to heckle those dam liberal politicians, and RINOS. Booty latina,😂 she’s wearing enhanced booty pads with a high school dress she used to wear. Our political system is a mess when we got people like AOC. Results of stupid people voters OR stolen elections. Thanks RVM for FREE speech.

The bartender who brings nothing to the table sad because capital police didnt murder Alex like they did Roseanne Boyland and Ashlii Babbitt.