UPDATE: A Bill Gates Foundation Grocery Distribution Center in the Netherlands Goes Up in Flames

A large fire raged in a distribution center of online supermarket Picnic in Almelo on Sunday evening. The building on the Zeearend was completely on fire, reports the fire brigade. A little before 1:00 am, the fire master signal was given. However, the fire brigade will still be working on extinguishing the fire for some time.

The fire brigade arrived with several vehicles and flew a drone above the building to get a good picture of the fire. The extinguishing activities were aimed at preventing the fire from spreading to neighboring buildings.

It could be seen that a lot of smoke is released from the fire in the surrounding area. The fire brigade warned local residents to stay out of the smoke and to keep windows and doors closed. The amount of smoke has since decreased significantly. The nearby hospital was not affected by the smoke, according to the fire service.

Were those two videos above of fires burning government corruption to the ground? 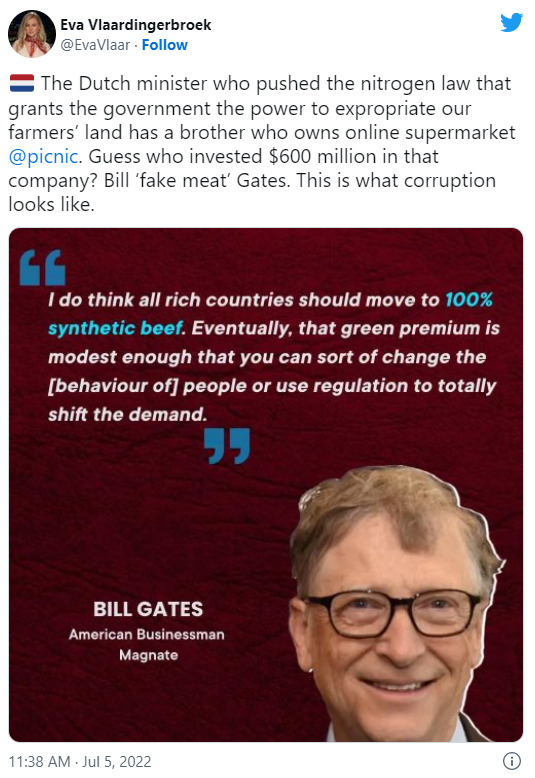 Dutch farmers and Canadian truckers are setting and have set an example for the world. We must all do everything we can to disrupt the globalist agenda…

“They [farmers] have livestock, and they produce beef. And what’s interesting to know is that the Dutch minister who has pushed this Nitrogen law has a brother-in-law who is the owner of the Dutch online supermarket called Picnic. Guess who invested $600 million in Picnic last year? Right Bill Gates, the man who wants you to eat fake meat.” – Eva Vlaardingerbroek

“They are basically saying this is what is going to happen if you take our land away. We’re going to have food shortages. Because already right now in the Dutch supermarkets, a lot of the shelves are empty.”

MORE NEWS: The World Is On Fire & We Keep Pouring Gas On It Because We’re Idiots – Mutually Assured Destruction [VIDEO]

“We basically serve as these pilot countries for the rollout of this 2030 agenda for the World Economic Forum.”

I am rather puzzled–why the surprize? Isn’t fire normally associated with Belial’s pernicious GAT€S of H€ll. . . Whoa! What an event–for pfffft it all went. Moreover, may h€ also PFFFFT-OFF along with other W€F’n NWØ Lucif€rian minions WHØ ding-dings, too, all €vil as they come! Hence, time for them to go–like an €vil wind that’ll §imply BLØW-ØFF whence it came . . . Lolz ! ! ! ⚡️☝️⚡️ P.§. Hope no one was hurt as a result of the conflagratory celebratory vent, of which there’ll likely more, I suspect, in any event.

HELLO, Out There On Or In The World Wide Web To Mr. Extremely And Infamously Filthy Rich, Warmonger = Who Wants More Power Minded Anti-US Constitutional Land Grabbing William “FAKE Meat = Vegan Eater ‘ Billy Boy'” Gates, Why Don’t You And Your Illegally & Extremely Infamously Filthy RICH Elitist And Globalist Monster INGRATES = SSSTTTOOOPPP COMMITTING YOUR Anti-US Constitutional WAY OR IT IS THE HIGHWAY AGENDA, And START Acting Like A REAL Human Being And Start SPREADING THAT ILL-GOTTEN-GAINS = WEALTH OF YOURS TO US MIDDLE AND POOR CLASS OF HUMAN BEINGS CALLED WE THE LEGAL CITIZENS/PEOPLE AND LEGAL IMMIGRANTS OF THE USA, AND START Considering devising A Plan To Start DEPORTING All Of Those ILLEGAL FOREIGN ALIENS BACK TO WHEREVER THEY CAME FROM STAT, STAT, STAT!!!

TO HELL WITH YOUR SO-CALLED APPROVAL

This government takeover is going to bite all governments in the ass. I am so very tired of the wealthy dictators trying to tell us what is good for us. I myself turn to God to help me with the things I cannot do for myself. We need to get rid of these false gods and turn back to the one true God.

That is exactly what we need to do.When you throw God out you open the door to satan. Satan and his minions are destroying the world.Only God can stop this but that means that we need to stop ignoring our creator, go back to church and pray a lot.

6
Reply
Yo MaMa
Reply to  Colleen

“By Any, ooops I mean ALL Means Necessary”

both Jesus and our founding fathers said to SEPARATE from evil people. “come out from among them, be ye separate”. “touch not the unclean thing”

The OP wrote ‘GOD’, and did not mention committing idolatry by worshipping God’s messenger as you have. Get it right or you will not be on the boat when the flood comes. All worship practices must be devoted to God alone. Never pray to anyone besides God alone.

If one is hoping in God, then they should appreciate and worship God.

I agree. We must put in the work, get our hearts straight, appreciating and dedicating all our worship practices to God alone, not committing idol worship. For certain every person will be held accountable for their deeds, good and bad. But if God were to send a disaster as retribution, we had better not be with the transgressors.

By the way, there is a global disaster prophecy in the scripture which is yet to be fulfilled, and it is due, so it could happen any moment.

only to fools (communist)

Well, we know what they are doing, but they don’t care that we know. On the contrary, they are amused that we know, because that boosts their egos, since they know we cannot do anything about it. The smiles in their faces tell you everything – they are enjoying themselves at our expense.

The criminal activity of this cabal is now almost not disguised at all. They have the politicians, the police, the judges, and the other public servants by their balls. They own the media. They have the money to bribe anyone – and, the few they can not bribe, they have destroyed by their media, thrown in jail, or have assassinated.

They are the new nobility, who can do whatever they want to us peasants. And soon, in their New World Order, they will declare themselves gods.

cowards can do nothing about it. REAL men are told and taught to NOT be victims or slaves. Grow a pair, buy a backbone…. stand for something. GOD hate the luke warm

Is he a rancher? a farmer? NO Is he a doctor? NO why are you listening to him STOP IT !

Maybe the Gates bioweapon “food” products were intended to combust inside people, but they prematurely burst into flames.

Was The CCP Spy Balloon Just A Distraction From This? [VIDEO]