SAN ANTONIO, TX – First Lady Jill Biden is enduring quite the bit of criticism following a speech she delivered before a progressive nonprofit in Texas earlier in July where she compared the diversity of Latinos [1] to being like “breakfast tacos.”

The unusual comparison made by the First Lady came on July 11th while addressing a crowd gathered for a UnidosUS event, which is a nonprofit organization that focuses on civil rights and general advocacy of the Latino community.

“But we can’t get those things on our own. Raul [Yzaguirre] helped build this organization with the understanding that the diversity of this community, as distinct as the [bodegas] of the Bronx, as beautiful as the blossoms of Miami, and as unique as the breakfast tacos here in San Antonio, is your strength.”

In a hardly shocking turn of events, many members of the Latino community were not amused by the concept of having their diversity compared to “breakfast tacos.”

The National Association of Hispanic Journalists (NAHJ) issued a response to Jill Biden’s comments shortly after the unflattering comparison was uttered, urging her to get “her speech writing team” in check and strongly asserting that the Latino community “are not tacos.” 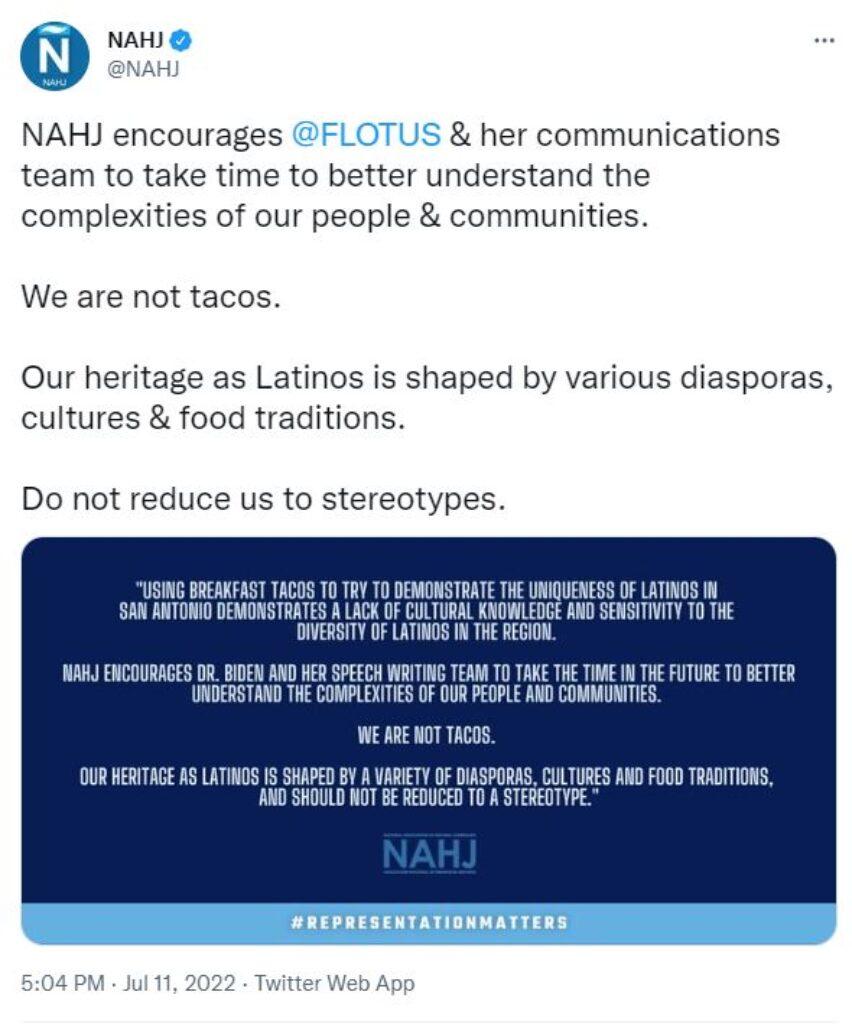 “Using breakfast tacos to try to demonstrate the uniqueness of the Latinos in San Antonio demonstrates a lack of cultural knowledge and sensitivity to the diversity of Latinos in the region. NAHJ encourages Dr. Biden and her speech writing team to take the time in the future to better understand the complexities of our people and communities. We are not tacos. Our heritage as Latinos is shaped by a variety of diasporas, cultures, and food traditions, and should not be reduced to a stereotype.”

Outside of Jill Biden spurring backlash over comparing the diversity within the Latino community to “breakfast tacos,” she also managed to mispronounce the word “bodegas,” enunciating the word as “bogadas.”

With Jill Biden’s July 11th faux pas likening Latinos to tacos, it’s hard not to observe the matter as a fruitless attempt at pandering that was delivered tactlessly – but again, we are dealing with the wife of Joe Biden, who has his own history of similar tone deaf acts/comments.

One such instance that rings similar to Jill Biden’s comments in Texas stems from a September 2020 event Joe Biden hosted [2] in Kissimmee, Florida, where Joe Biden was attempting to gain support from Hispanic voters.

Upon taking the stage at the event (which was meant to celebrate Hispanic Heritage Month), Joe Biden decided to show just how in-tune he was with the community by pulling out his cellphone and playing the hit reggaeton song “Despacito” – a move that was largely considered to be both cringy and pandering to the Florida crowd.