WASHINGTON, DC – Republican Rep. Marjorie Taylor Greene recently brought about a suggestion of what useful employment of time would be regarding a House committee investigation, saying that officials should be looking into the “friends” of Jeffrey Epstein and Ghislaine Maxwell in the wake of Maxwell’s recent sentencing.

On June 28th, we at Red Voice Media reported on Maxwell being handed down a 20-year sentence following her conviction regarding the grooming and sexual abuse of numerous young girls between the 1990s and the 2000s alongside the late Epstein.

Assistant U.S. Attorney Alison Moe described Maxwell’s criminal acts of abuse conducted in tandem with Epstein, saying before the court, “They were partners in crime together, and they molested these kids together,” characterizing the predator as “a person who was indifferent to the suffering of other human beings.”

But there are still looming questions revolving around the Epstein/Maxwell scandal, with one of the most pressing of them being: Who were the clients of these two sex traffickers?

MORE NEWS: Maajid Nawaz: When Central Bankers Say They Want Absolute Control, You Should Believe Them

Back in December of 2021, following Maxwell’s conviction, Gaby Hinsliff observed in a piece for The Guardian how Maxwell “will now die in prison, while the men involved remain either free to live their lives or (in Epstein’s case) beyond the reach of any mortal judge, provokes a nagging sense of unfinished business.”

In a sense, everyone who has followed the saga of Epstein and Maxwell feels that this is the end of it – no more arrests, no more trials, no more digging in to ascertain who was being serviced by Maxwell and Epstein.

Yet, Rep. Greene is hoping to spark a movement to have the investigation carry on, taking to Twitter on June 28th and suggesting that the House allocate a committee to look into the Epstein/Maxwell clients.

“You know what else would be very good committee hearings? Investigating Jeffrey Epstein’s friends who enjoyed the hard work of this madam, who handed over minors to powerful men for sexual pleasure. Maxwell named the Clinton Foundation as an organization she worked with.” 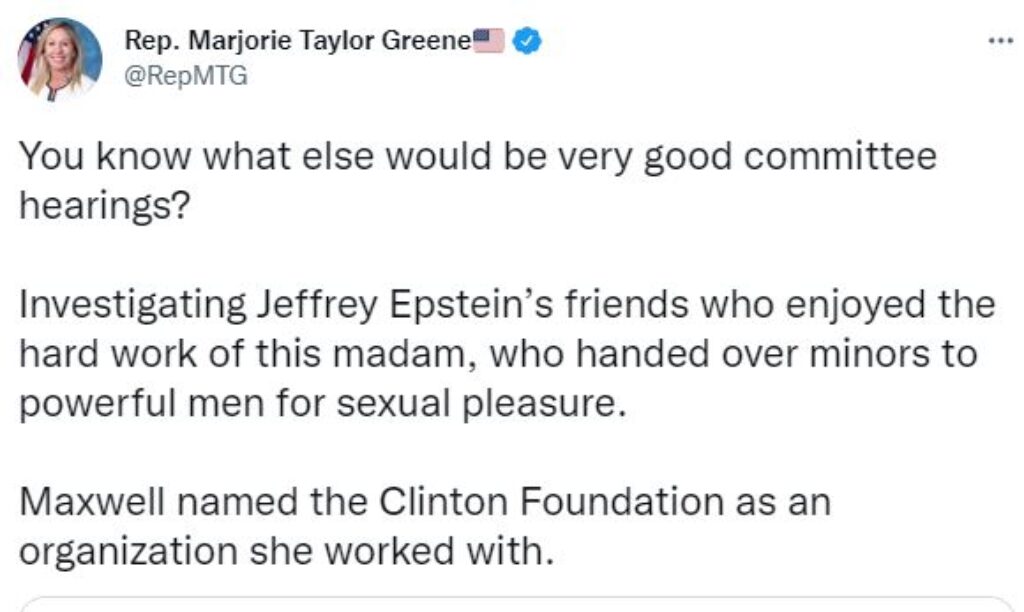 The remarking of allocating committee hearings on the aforementioned topic is undoubtedly a partial dig at the House select committee holding the televised hearings regarding January 6 – quite literally a single riot that lasted a few hours.

A $9.3 million price tag to hold televised hearings about an incident resulted in an estimated $1.5 million in damage – arguably a prime example of some terribly allocated funds and displaced priorities.

Spending millions of American taxpayer dollars on false charges is standard operating procedure for the mentally deranged fake government and the illegal organizations FBI, CIA, etc)
Look at how much we have had to pay for their error in 2016. Killary didn’t buy enough votes because she really didn’t realize how much people hate her. She thought she wouldn’t need to pay for switching too many votes.
President Trump has borne so much but it isn’t Him they hate………… it’s us!
I’m very weary of hearing this referred to as Capital riots.
This was another setup by nasty pelopsi and her paid Nazis, fbi and Capital police. That’s it…… the Truth. The rioters were under the direction of one of the most evil old hags who ever breathed air…… old nasty pelopsi!

Pedophilia & Molestation crimes should not have statute of limitations! Hang’em ALL!

Maajid Nawaz: When Central Bankers Say They Want Absolute Control, You Should Believe Them