There's no such thing as ex-CIA...

A revealing report from MintPress News detailed just how deeply in bed Facebook is with the likes of former spooks, as the company has hired dozens of ex-CIA and FBI agents to handle the platform’s content moderation. In short, that means former CIA agents are deciding what to censor, and whom.

There’s a bit of a joke when it comes to former spooks where one will say, “There’s no such thing as ex-CIA,” which is an allusion to someone never truly leaving the spy game after their time in the agency. And while the adage might conjure a few chuckles, there’s hardly anything funny about former spooks being involved in content moderation on the largest social media platform.

On said page, users will be able to interact with a number of videos featuring Facebook employees whose jobs revolve around content moderation.

An individual featured in one of these videos is Aaron, who says while being interviewed that it’s not an easy undertaking to draw a distinction between “harmful content and protecting freedom of speech. It’s a balance,” all while a pleasant piano melody akin to what one might hear in an erectile dysfunction medicine commercial is playing along.

By all means, Aaron looks just like a regular fella, holding up pictures of his family while explaining his role as a “product policy manager,” with the camera at time zooming in to emphasize his wedding band – almost as if the highly-produced video is trying to convey a sense that Aaron is someone you can trust.

Welp, it turns out Aaron spent over 17 years at the CIA before joining Facebook in 2019.

“Studying various employment websites, it’s clear FB is actively recruiting directly from the CIA to fill some of its most politically sensitive positions regarding content moderation, allowing them to wield considerable influence over the biggest media/news platform in history.” 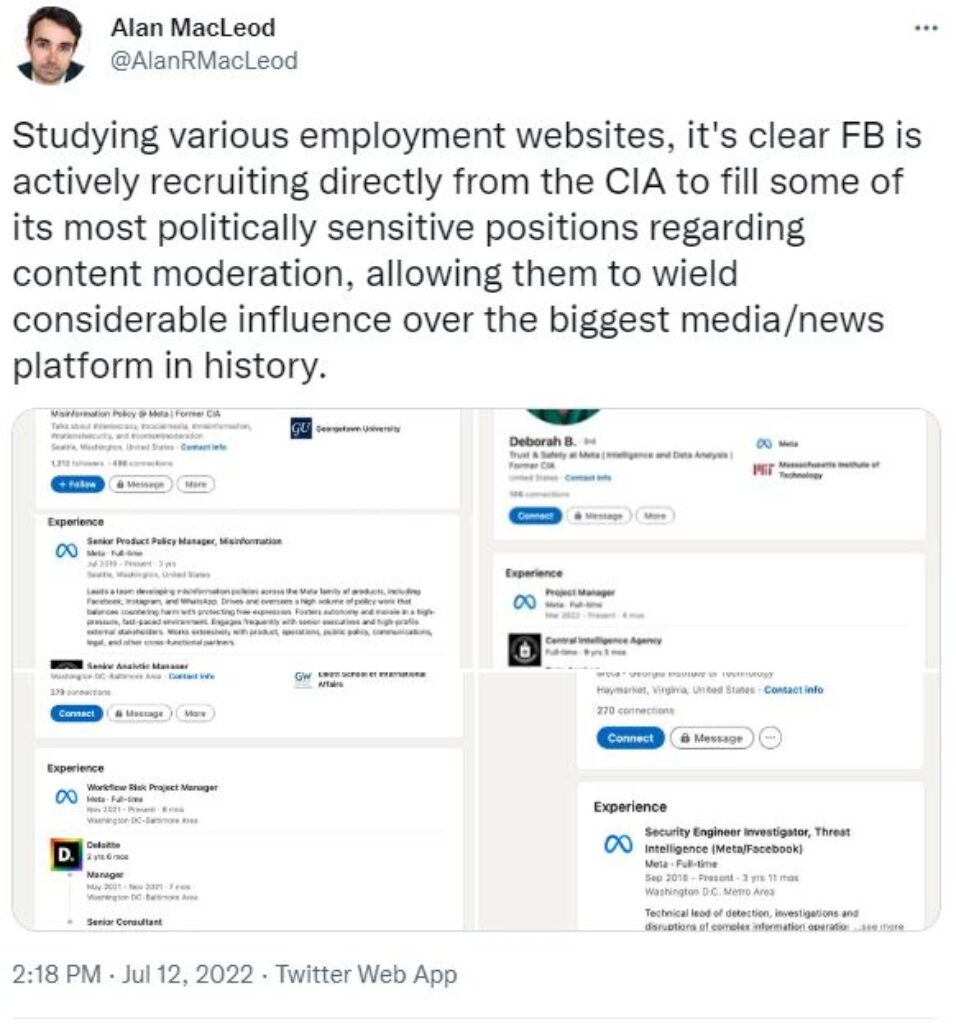 Among those featured screenshots shared by MacLeod was none other than Aaron Berman, the man featured in the Facebook video. 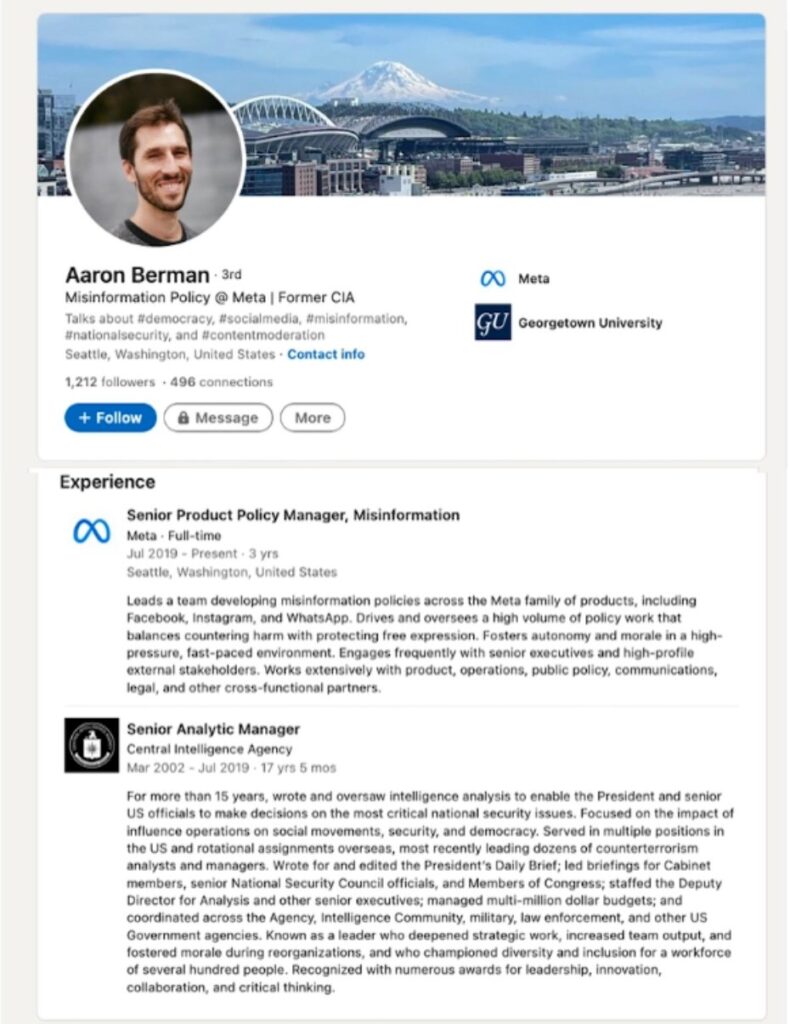 According to Berman’s personal LinkedIn profile, he worked at the CIA between March of 2002 to July of 2019 as a senior analytic manager, where in his own words provided intel reports utilized by “the President and senior US officials to make decisions on the most critical national security issues.” Perhaps the most interesting part of Berman’s description of his work at the CIA was that he, “Focused on the impact of influence operations on social movements.”

But Berman is merely one of dozens of former state actors who’ve been recruited from various alphabet agencies like the CIA, FBI, and DoD, with MacLeod noting in his report that these individuals are placed “primarily in highly politically sensitive sectors such as trust, security and content moderation, to the point where some might feel it becomes difficult to see where the U.S. national security state ends and Facebook begins.”

And this conundrum of former spooks taking up the ranks of Facebook, which is one of the largest platforms where people get their news and general information from, creates a “best of both worlds for Washington” via the “veneer of plausible deniability,” according to MacLeod.

Basically, these former agents were groomed by the Washington agenda by rising “through the ranks of the national security state” before landing in Facebook, and it would be foolish to think these folks don’t have a direct line of contact from within the agencies they came from.

These individuals who control the content on Facebook are undoubtedly still rubbing elbows with their former colleagues at the alphabet agencies, with these former colleagues likely filling their ears with what should and shouldn’t be allowed on the social media platform.

So, People, we know beyond a shadow of a doubt that Facebook is a government propaganda machine designed for the purpose of moving us away from our freedoms…!!! Every man, woman and child must remove themselves from this antiAmerian propaganda tool..!! It’s a trap…!! Get off Facebook..!!

Well, well, well, Mr. Aaron Berman, A Ex-US CIA Spook (Who Is Illegally Spreading All The Left Side Of The Questionable US Political Equations Pertinent Mis-Information = LIES Program, While Working At META = ETAM, The New Parent Of Facebook = ecafkooB, Who LOVES CENSURING, CANCELING, The Whole Right Side Of The US Political Equations Free Speech, The Right Sides Freedoms And LIBERTY’S), you are just like All Of Those Truly Anti-US Constitutional Communistic Socialistic Progressive Liberal Democratic Donkey Swamp Creatures = Ex-FBI Head Honcho’s, Who Are All Spook’s, Like Mr. James B. Comey, Mr. Robert S. Mueller The 3rd = The Turd [Who Led All 12 Of His Co-Hort Anti-US Constitutional Lawyers, In Trying To Illegally Find Any Illegal Actions Concerning #45 = Who Never Committed Anything ILLEGAL According Mr. Durham’s Investigation, Who Is Finding A Lot Of Illegal Actions That the LEFT Side Of The US Political Equation Has Actually Committed Against #45, Who Was Never A Professional Politician Like You Ingrates, And Your Follower Mr. Andrew McCabe, Mr. Christopher Wray, Just Like That Communistic Chinese Spy Missy Fang Fang, Who Embedded Her Fangs Into Mr. Swalwell, Who Untruthfully Said He Was NOT In BED With Missy Fang Fang! Since All Of You Have Been Directing The US Justice System, Just Like Missy Illegally Voted For Veeeep Kamala “On Her Back With Her Legs Spread Apart And In The Air” Harris, Whose Supposed To Be The US Border Czar = ON PURPOSE NOT STOPPING All Of Those Illegal Foreign Aliens From ILLEGALLY ENTERING THE USA, All Of Those Illegal Foreign Aliens From Foreign Countries, Who Have Been Invading The US Boundary, Especially The Southern Border, Like It Is An UNSECURED Old Fashioned Department Stores Revolving Front And Back Doors, just like what happened to a Ohio 10 Year Old Female/Woman/Lady/Girl, Who Was Sexually Attacked = Im-Pregnated By An Illegal Foreign Alien = Mr. Gerson Fuentes! I Say That The Whole Left Side Of The US Political Equation Has To Be DEPORTED Outside Of The USA’s Boundaries STAT, Because The Left LOVES TO IGNORE = CIRCUMNAVIGATE = CIRCUMVENT The Whole US Constitution, Especially The Last Part, That Was Signed By Ex-US President William “‘Billy Boy’ Slick Willy” Clinton On 7/27/1993 AD’s Version Of The US Immigration And Naturalization Act!!!!!!!!!!!!!!!!!!!

on a flight to an area of international waters, perhaps…?

Oh ya this will end our freedom of speech for sure. I will have to kill my account

I heard years ago that the CIA runs Facebook. Mark is just the front man. What better way for the government to monitor citizens by creating social website. But yet things are sold to the public as being individually owned. I remember Mark’s financial influence in the 2020 election 🤔

I don’t believe it. Most CIA employees are ducking morons. Oh wait I just proved your point. I’m a “former spook” and Facebook absolutely HATES me. Good thing is, most of the employees since 2005 are idiot millennials anyway.

then you would be that one in a bazillion…you already know how to watch your back. they don’t like independent thought- unless it’s their own. God protect you, sir.