"Make no mistake, however. We support the event..."

PIMA COUNTY, AZ – According to a report from The Post Millennial, the Pima County Democratic Party showed their true colors as it relates to celebrating their patriotism for the upcoming 4th of July, promoting an event titled “Fuck the 4th” slated for the day celebrating the independence of the United States.

On July 1st, the Pima County Democratic Party opted to boost an event on Twitter dubbed as “Fuck the 4th,” which, according to the graphic shared by the event organizers, is slated to be a “Women’s March” in Tucson’s Reid Park on the evening of July 4th.

The official representatives from the county’s Democratic party captioned the graphic with, “F*ck the Fourth. See you at Reid Park.” 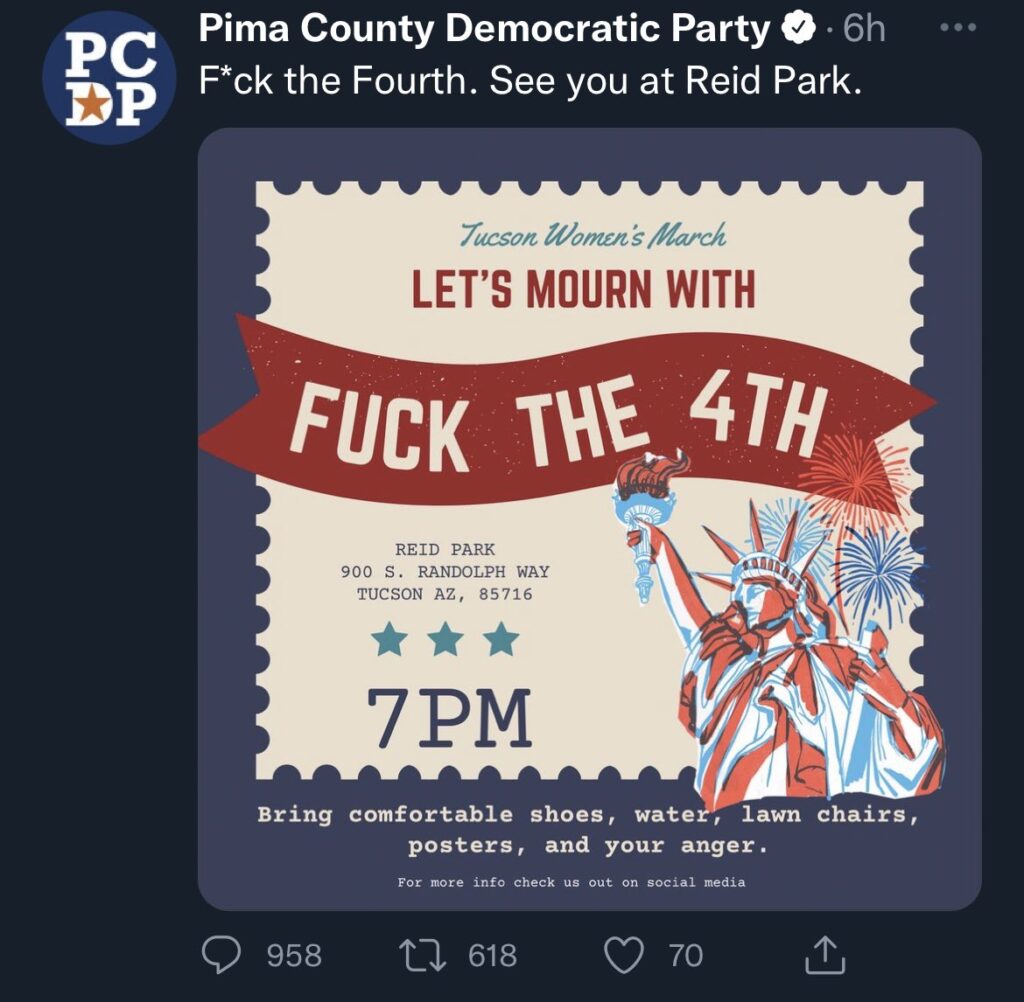 Clearly, the event is inspired by the recent overturning of Roe v. Wade, with the graphic instructing attendees to “Bring comfortable shoes, water, lawn chairs, posters, and your anger.”

Shortly after posting the above-featured tweet, the Pima County Democratic Party opted to delete the offending post, likely due to the immense blowback they’d received over the tastelessness of the content.

However, the damage was done, with Republicans showcasing this as yet another example of Democrats going mask-off with their anti-American spirit.

Arizona Republican gubernatorial candidate Kari Lake shared the graphic on Telegram, juxtaposing the anti-American event with one she was promoting for July 4th in Flagstaff dubbed “Kari Lake’s 4th of July Party.”

Lake captioned her post with, “The Arizona Democrat Party is celebrating 4th of July with a “F*CK THE FOURTH” protest. Arizona Republicans, Independents & #WalkAway Dems are celebrating America at a gun range. The difference could not be more clear.”

In the wake of the pushback stemming from the Pima County Democratic Party’s social media post, the official account delivered a half-hearted apology over the matter, stating it was in “poor taste” and that they shared the event in “haste” over being excited about such a march.

“PCDP posted a graphic advertising a women’s march, which, we agree, was in poor taste. We were eager to share the event, and in our haste, we used the graphic provided by the event organizer. That was a mistake, and we will do better.”

Of course, despite claiming the post was in “poor taste,” the Pima County Democratic Party wheeled that sentiment right on back within the same Twitter thread by asserting they “support the event” because of the recent ruling from the Supreme Court.

“Make no mistake, however. We support the event, which will be on July 4 at 7 pm at Reid Park. The event was organized to help women in our community grieve for the loss of their bodily autonomy, which we consider an elemental right.

Our posting of the graphic upset some people. We urge you to save your outrage for the women in this state who will die of botched abortions. Arizona is not a good place to be a woman right now.” 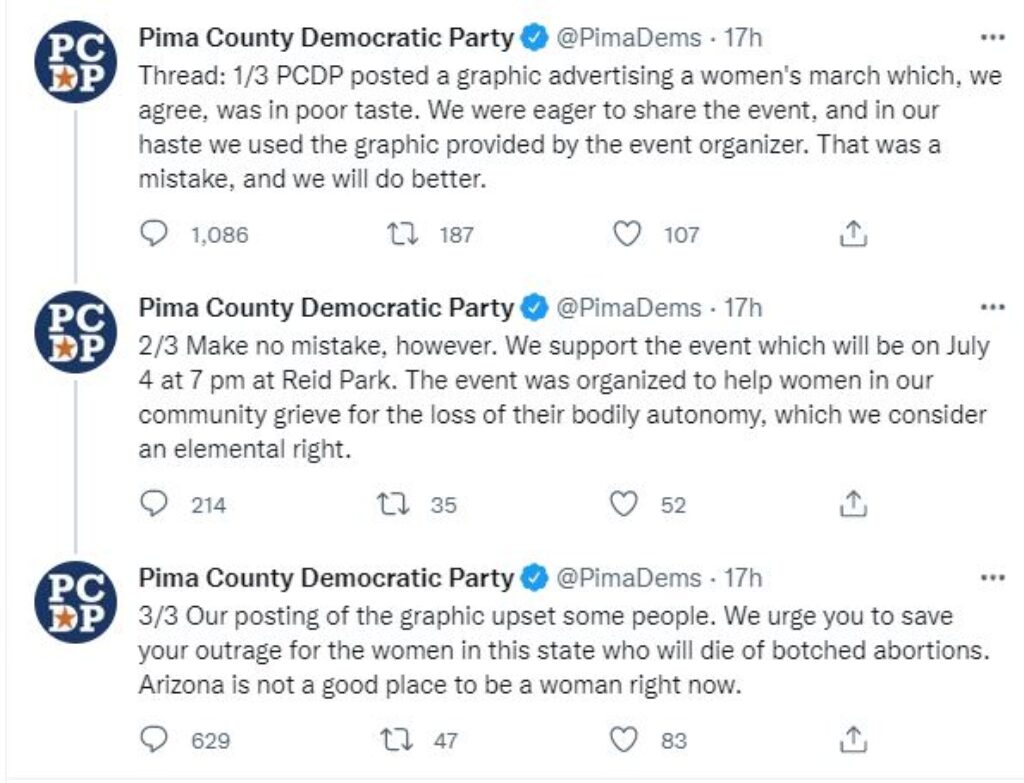 The irony of the Pima County Democratic Party decrying the potential loss of “bodily autonomy” is almost laughable, considering this is the same party that was cheering on for mandatory COVID shots. 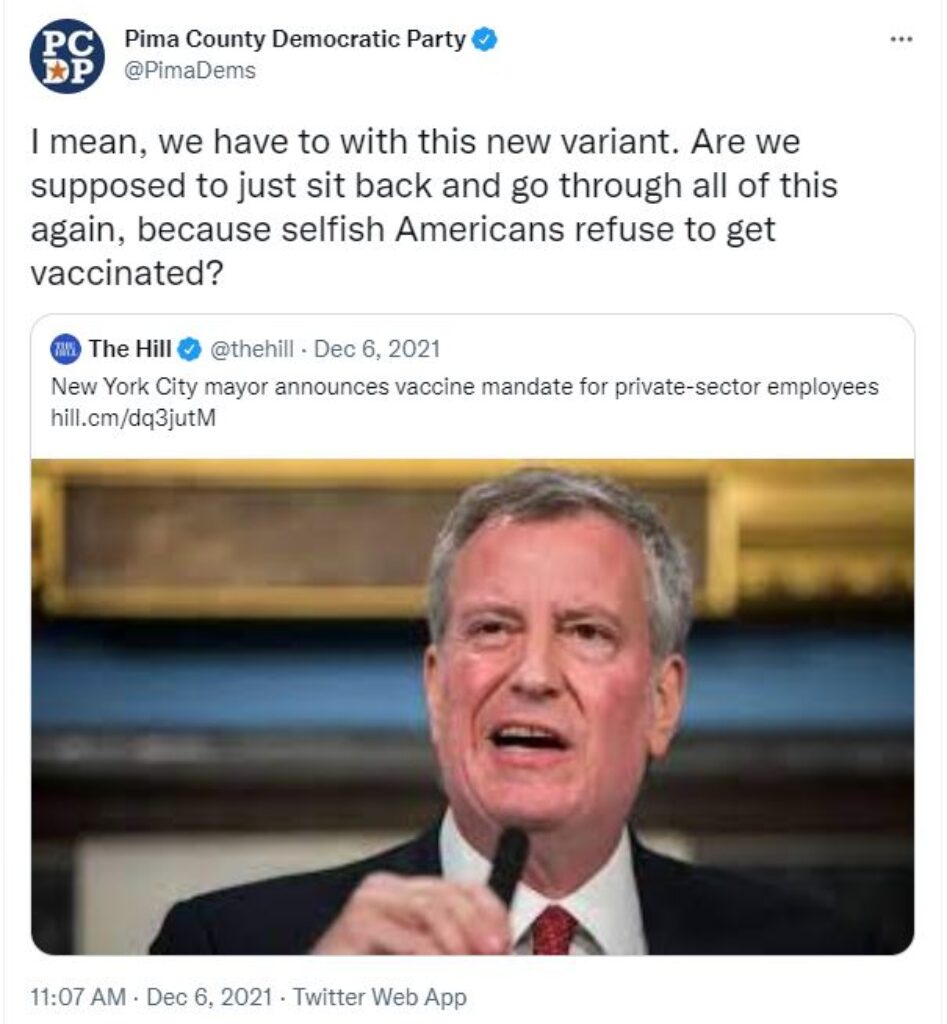 so basically if we cant kill no one will have peace. these people done given their lives right over to satan and are too selfish and IGNORANT to know it.

No one is making these DEMONRATS live in the U.S.A., if they HATE it here so much, THEY ALL CAN LEAVE. We ALL would be better off WITHOUT THEM.

Postmortem results on the ills of the Marxist Democrat Party revealed many causes.
A muddled understanding of past and current undertakings revealed: Stupid is; as Stupid does.

Tom Hanks,:
”Mama always had a way of explaining things so I could understand them.”

Sally Field:
“Stupid is as stupid does.”

I don’t have much regard for anything that loves to announce the F bomb, which means one is very socially liberal even though they aren’t that way politically. It doesn’t make respectable republicans look good.

This is a disgusting movement, and if you don’t like America, get out.

33 mins ago
Premium Plus