"...the group 'is a cult and pyramid scheme' that is an offshoot of the RevCom (Revolutionary Communist Party)."

LOS ANGELES, CA – A group of pro-abortion activists held a nauseating demonstration outside of Los Angeles City Hall this week, dousing the City Hall steps in fake blood and chaining themselves to the building in protest regarding the overturning of Roe v. Wade.

Four women associated with the group “Rise Up 4 Abortion Rights” held a demonstration outside Los Angeles City Hall on July 6th, complete with copious amounts of fake blood which they used to douse the crotch of their pants as well as the steps of City Hall.

One of the women from the group addressed spectators, demanding that people engage in “mass, sustained, non-violent protest” to call for “nationwide, legal abortion.”

It likely goes without saying, but California is arguably one of the most abortion-friendly states throughout the entire country, one where there is literally zero risk of abortion being upended – yet, for whatever reason, the group saw fit to protest in Los Angeles.

The four faux-blood-drenched pro-abortion activists were eventually detained by police for the stunt but later released. It’s unclear whether the four participants are facing any charges or civil fines based on the obvious vandalism that accompanied their demonstration.

“Rise 4 Abortion Rights” is among one of the more controversial sects within the pro-abortion movement, as they’re not even attempting to employ the bad-faith arguments about acts of physical health of the mother, rape, or incest when claiming that abortion should be a right.

Rather, as they clearly point out on their official Twitter account, the group advocates for “abortion on demand and without apology.” 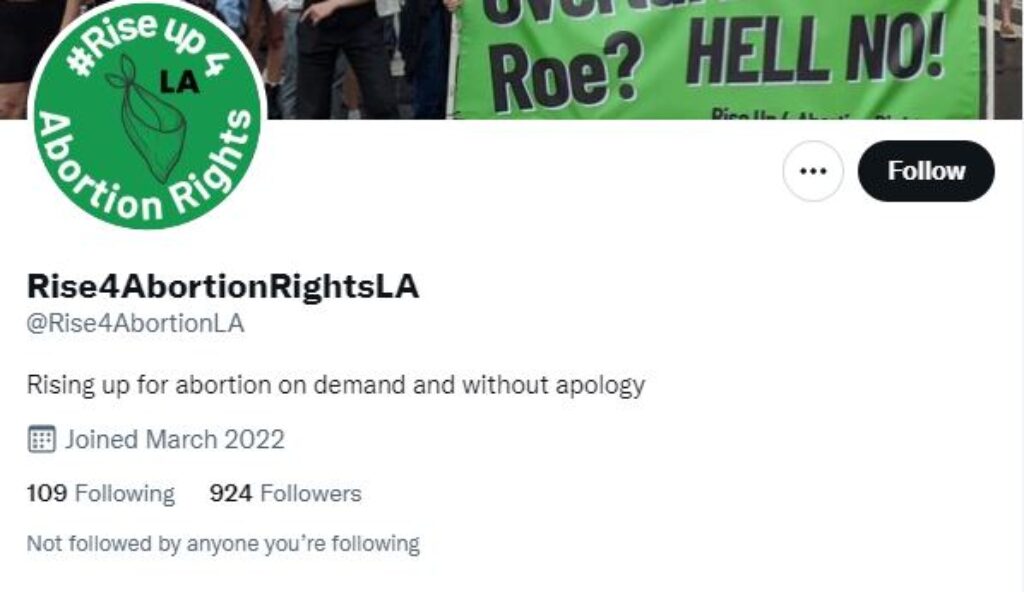 As crazy as it sounds, the tactics employed by “Rise 4 Abortion Rights” has resulted in other pro-abortion groups/movements wanting to distance themselves from the outfit’s shock-tactics.

“NYC for Abortion Rights” decried the group’s “theatrical tactics” that consist of “the wearing of white pants painted with fake blood, die-ins, and coat-hanger imagery,” adding that the group “is a cult and pyramid scheme” that “is an offshoot of the RevCom (Revolutionary Communist Party).”

Hypocrites. they only care about their lives not the babies. what demonic freaks! I suggest they get right with God and repent or suffer the consequences. Most of the abortions done are used as birth control. NOT BECAUSE OF RAPE, INCEST OR THE LIFE OF THE WOMAN IS IN JEOPARDY DUE TO THE PREGNANCY ITSELF. that is a fact!

These women should have been sentenced to clean up the mess they made.

Rep. James Comer: Confident Gov. Officials Communicated on Behalf of Biden W.H. on What to Censor