Following a handful of interviews where Rep. Marjorie Taylor Greene made references to people embracing “American nationalism” and “Christian nationalism,” the leftists on Twitter put in some overtime on the platform to have the phrase “She is a Nazi” reach trending level this week.

For those not hip to the Twittersphere and some of the features on the platform, the social media company presents users navigating the search function with what is actively “trending” on the platform – whether they be general news stories or specific/unique phrases being mentioned by users on the platform.

One such instance of Rep. Greene making reference to the aforementioned occurred during an interview with Next News Network while she was attending the Turning Point USA Student Action Summit in Tamp, Florida.

On a July 18th appearance on the podcast “In The Litterbox with Jewels and Catturd,” Rep. Greene said, “I believe in accountability, and I believe in not just saying something, but following through on it. And I believe that Republicans need to prove to the American people that we are the party of American nationalism and Christian nationalism.

The Twitter account “Patriot Takes” shared the segment of the podcast where Rep. Greene made these comments, which in part helped fuel the online outrage mob likening the congresswoman’s comments to an endorsement of Nazism. 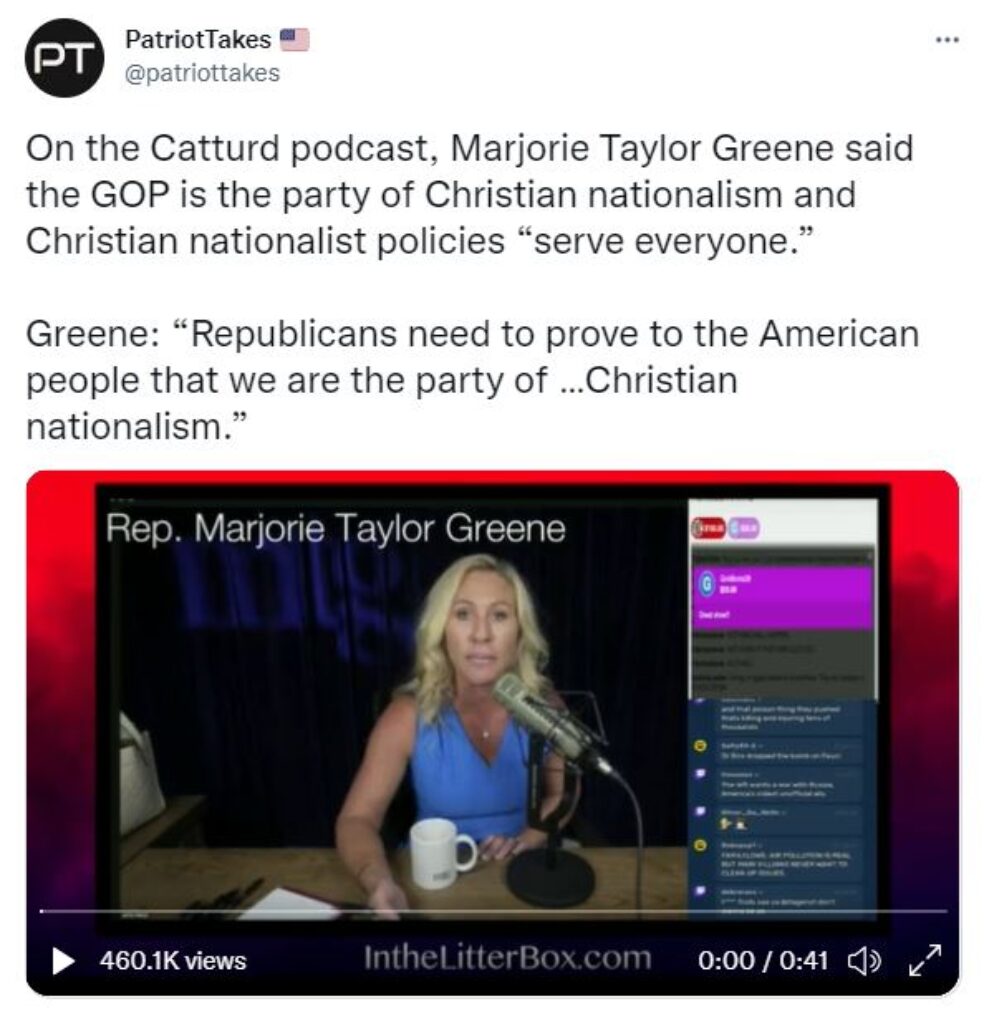 In the days that followed, leftists touting their false smears and sky-is-falling rhetoric began posting memes and unsound opinions comparing Rep. Greene to Hitler or asserting that she’s a Nazi. 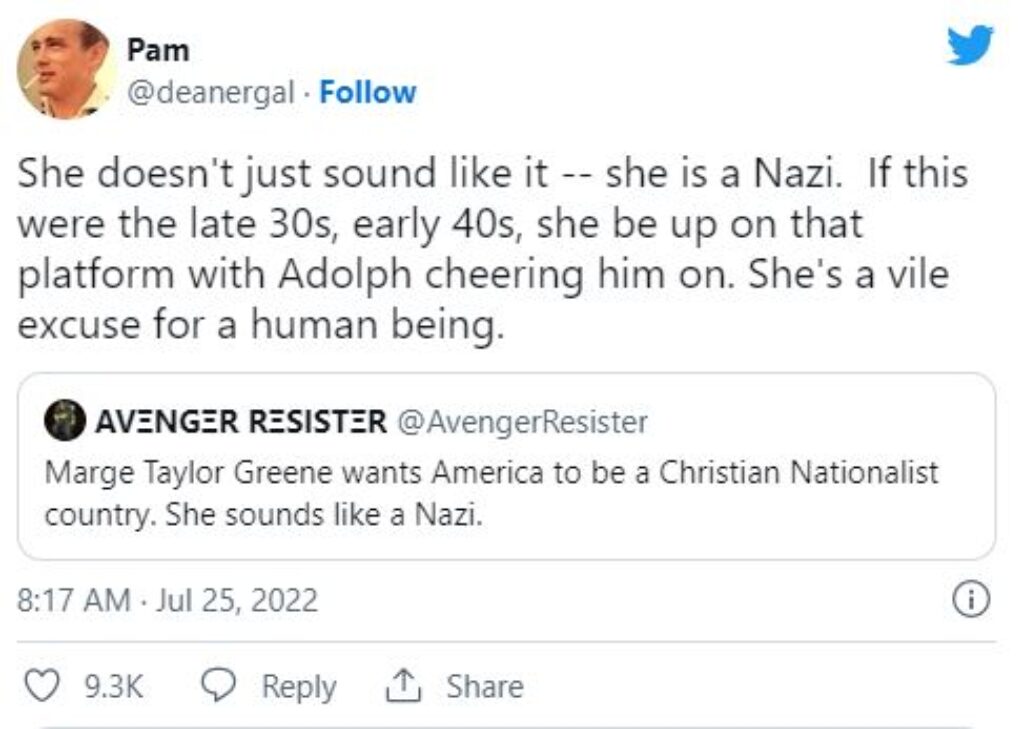 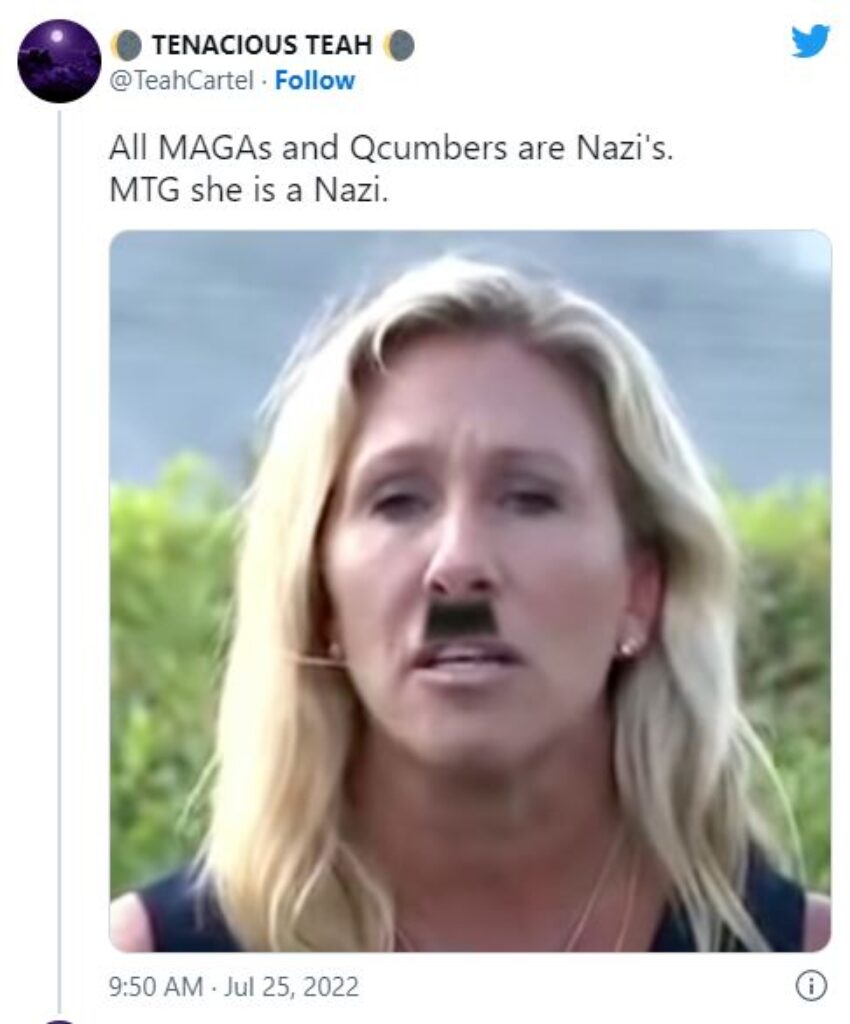 However, anyone willing to devote a minute or so of time to examine what Nazism is and what American or Christian nationalism is would be able to determine that there’s hardly a similar comparison to be found.

Obviously, American nationalism is nowhere near to the tenets that composed the National Socialist German Workers’ Party, which was a hodge-podge of embracing eugenics and anti-bourgeois sentiments, where political dissidents and those of a foreign race were deemed undesirable. It goes without saying that Nazism came in tow with a particular disdain for those of Jewish descent.

this is what reprobate minds look like folks. aint no helping them. any and everything makes them freak out and scream nazi. they are and will be 4ever victims of the world.

Come on to say “surprised you pulled that off legitimately”, I usually shorten with Nazism are socialists who think it didn’t work because of other races.

And nazifag boy here. What victim klaus? You have a country because G-d liked how you treated Jews. Look what happens in every sector to a country when we all leave, and tell me one that became anything after.

The leftists that wouldn’t know a Jewish concept from their fists say Nazi or whatever else the left tells them to have an ally, until they are completely brainwashed and useless to the world. I made groups to support Cruz and MTG for the same reasons, and i think her religious nationalist line is pointless, you can call all the things the left does obscene in purely scientific terms, but on every issue she is perfect.

Worthless gaslighting fag, and if you call me something over than you’re a victim huh? We don’t come on and correct you, just want to kick in your fag teeth and say forget this website.

The Ghouls At Pfizer Don’t Know When To Stop