The White House is Pro-Death

IDAHO – The Department of Justice (DOJ) has filed a lawsuit against Idaho in an attempt to prevent Idaho Code § 18-622 (§ 18-622) from going into effect, which is a highly restrictive abortion law that bans abortions “in all but extremely narrow circumstances.”

This comes weeks after the Supreme Court’s Dobbs decision, which sparked the DOJ to form the Reproductive Rights Task Force, an extremely partisan-style group that Associate Attorney General Vanita Gupta called a “devastating blow to reproductive freedom in the United States.”

According to the DOJ, the law, set to be implemented August 25, violates the federal Emergency Medical Treatment and Labor Act (EMTALA), which allows for abortions “in situations where an abortion is necessary stabilizing treatment for an emergency medical condition.” As the new Idaho law reads, abortions are acceptable when not doing so would cause death for the pregnant woman, but does not go as far as allowing aborting a baby for the health of the mother.

Biden’s DOJ argues that the Idaho law will conflict with federal protections by making it so a “prosecutor can indict, arrest and prosecute a physician merely by showing that an abortion has been performed, without regard to the circumstances. A physician who provides an abortion in Idaho can ultimately avoid criminal liability only by establishing as an affirmative defense that ‘the abortion was necessary to prevent the death of the pregnant woman’ or that, before performing the abortion, the pregnant patient (or, in some circumstances, their parent or guardian) reported an ‘act of rape or incest’ against the patient to a specified agency and provided a copy of the report to the physician.”

They also claim that the “criminal prohibition of all abortions” apparently “directly conflicts with EMTALA and stands as an obstacle to the accomplishment of EMTALA’s federal objectives of providing stabilizing care and treatment to anyone who needs it.”

Idaho Governor Brad Little has responded to the lawsuit, speaking out regarding the threat against state sovereignty. “Our nation’s highest court returned the issue of abortion to the states to regulate- end of story. The US Justice Department’s interference with Idaho’s pro-life law is another example of Biden overreaching yet again while he continue to ignore the issues that really should demand his attention- like crushing inflation and the open border with Mexico. Here in Idaho, we are proud that we have led the country in protecting preborn lives.

“I will continue to work with Attorney General Lawrence Wasden to vigorously uphold state sovereignty and defend Idaho’s laws in the face of federal meddling.” 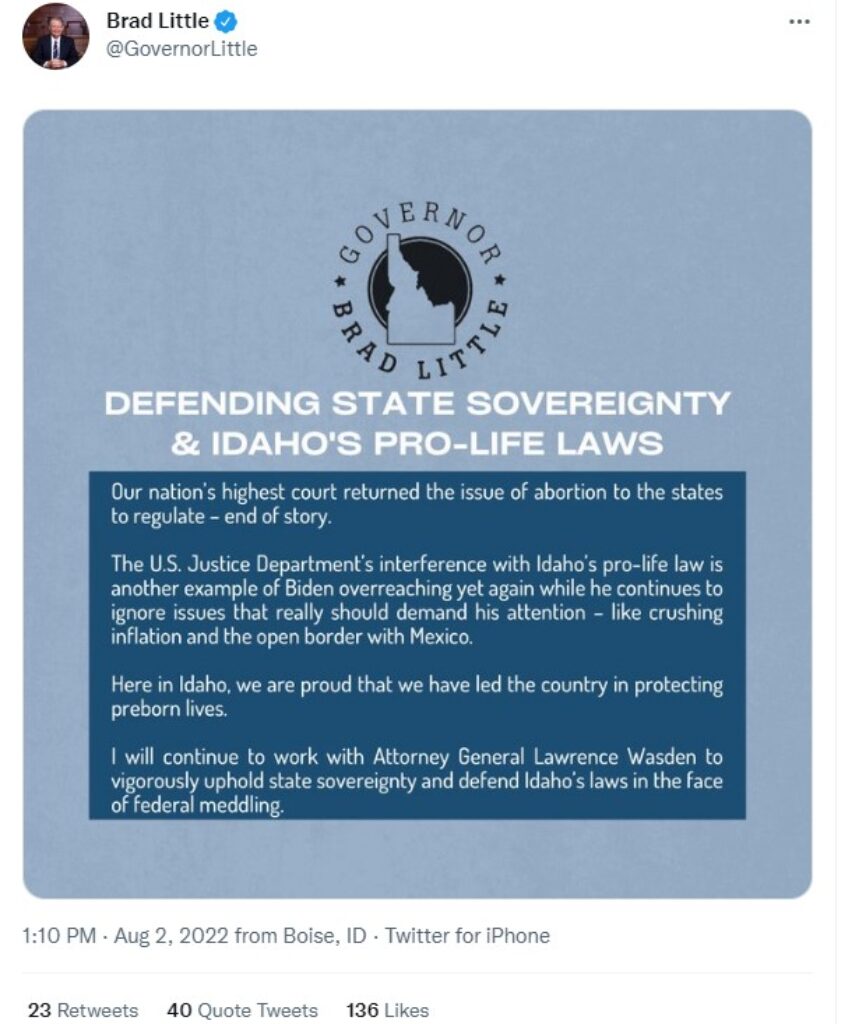 Many of Biden’s top appointees have spoken in favor of this lawsuit, such as Attorney General Merrick B. Garland, who said, “On the day Roe and Casey were overturned, we promised that the Justice Department would work tirelessly to protect and advance reproductive freedom. That is what we are doing, and that is what we will continue to do. We will use every tool at our disposal to ensure that pregnant women get the emergency medical treatment to which they are entitled under federal law. And we will closely scrutinize state abortion laws to ensure that they comply with federal law.”

“One critical focus of the Reproductive Rights Task Force has been assessing the fast-changing landscape of state laws and evaluating potential legal responses to infringements on federal protections,” Gupta said. “Today’s lawsuit against the State of Idaho for its near-absolute abortion ban is the first public example of this work in action. We know that these are frightening and uncertain times for pregnant women and their providers, and the Justice Department, through the Task Force’s work, is committed to doing everything we can to ensure continued lawful access to reproductive services.”

The U.S. Constitution does Not protect the use of abortion. Abortion is not even mentioned. The absence of original constitutional discussion on the subject, of abortion, moves the issue to each individual state to deal with legislation. What does the liberal mob Not understand about abortion and the constitution!?

Hunter Biden Bombshell Leak: They’re Not Telling You Everything [VIDEO]