Controversial comic Erik Larsen, who is most known for “Savage Dragon,” recently made comments on social media that Donald Trump should be “executed” on the “White House lawn.”

Speaking out regarding the FBI raid at former President Donald Trump’s Mar-a-Lago home, Larsen said in a tweet, “Donald Trump being executed for treason on the White House lawn is the closure America needs to start the healing process.”

Larsen, known for pushing politics in some of his works, has also been called out for sexism and even depicting a child sex assault in one of his comics (more on that below).

He also published an issue pushing Covid19 shots on children.

In another tweet, Larsen said, “Wondering if Trump stealing classified documents about nuclear weapons is, at last, the tipping point where the GOP finally tries and distance themselves from the guy or if they’ll attempt to paint that as totally cool.”

Not only has Larsen’s Savage Dragon turned political by having a character “fist bump” Barack Obama in 2009 and appear to endorse Joe Biden-Kamala Harris’ run in 2016, but one of his 2017 issues featured Trump chasing his main character while shouting “Kill them” and “Kill the aliens.”

Further, he has posted a depiction of Trump supporters, mocking them as sheep, with a sign of Trump as a wolf saying “I am going to eat you.” The caption for the comic reads, “He tells is like it is.” 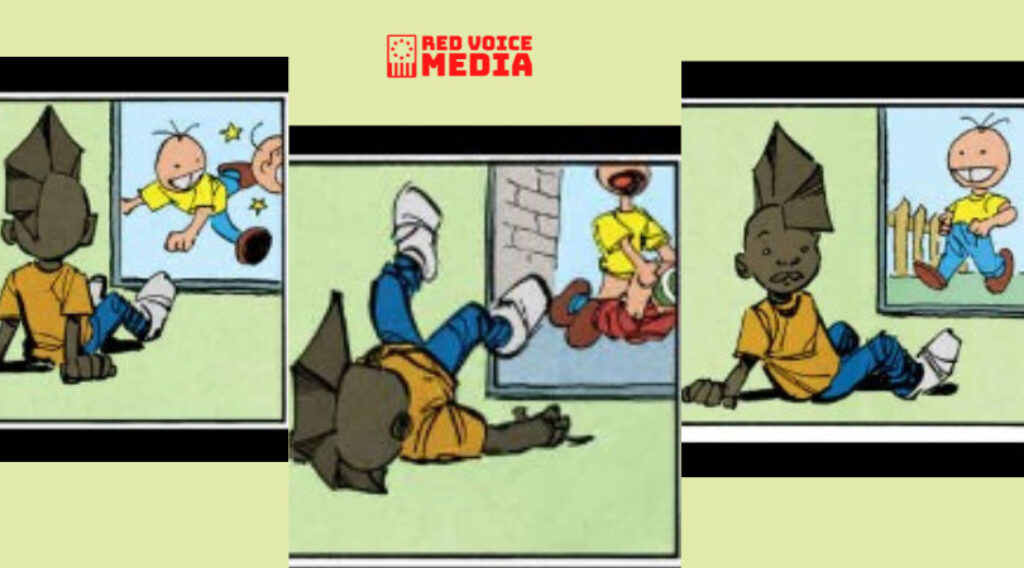 Apparently, Larsen used one character, Malcolm Dragon, in 2017 to push many sexual ideals out at once. As Bleeding Cool reported on many of the issues from 2017 on, where the comic appears to switch from a “quirky superhero comic” to an “all-out sex’n’Canadian politics comic.”

“The character has always had a sex drive, Bleeding Cool said, “but with his son, Malcolm Dragon, it became a focus of the book. Especially with his girlfriend and mother of one of his children, Maxine, who is now with Malcolm being a mother to them all. And who has encouraged threesomes. Foursomes. Given Malcolm Dragon the rides of his life. And this week’s episode, as Malcolm gets a vasectomy and moves to Canada (the two things are not related), well it just goes to ludicrous levels. Beyond Sex Criminals levels.”

Some of the images of several issues are so bad that they can’t even be shown without being censored.

Issue 233 has a cover where a woman has a shirt on that says “Bald is beautiful” and she is read to shave her vaginal area, while one of the characters is shaving his beard. The characters go on to have very animated sex, drawn crudely, complete with sound effects and disgusting verbiage.

What a sicko this cartoonist is!!! Yuck. I will pray for him

You know I just don’t get it. Why do they hate this man so much. It makes zero sense to me. How someone could just hate a person they have never met.

It’s not that you can’t express your opinion if it differs from those of the progressives. They don’t even want you to EXIST.