OXFORD, GA – A gay couple was arrested in Georgia for reportedly involving their two adopted children in recording and selling child pornography. The ages of the victims were not disclosed, described only [1] as the boys being “young.”

On July 27, the Walton County Sheriff’s Office (WCSO) responded to reports of a man downloading “child sexual abuse material,” or child pornography, after a detective with the Georgia Bureau of Investigation’s Internet Crimes Against Children Task Force received the information. During a raid of the Loganville home of the suspect (who was not identified) and an interview, they found that there was another location in the county [2] where a “secondary suspect was producing homemade child sexual abuse material with at least one child who lived in the home with the perpetrator.”

Officers responded to the Zulock home, where the WCSO’s Sheriff’s Emergency Response Team searched the home. The children- who are biological brothers and both adopted by the gay couple- were taken under the care of the county’s Division of Family and Child Services.

Both suspects were arrested after police found evidence that they’d both been participating in “sexually abusive acts and video documenting this abuse.”

Due to the quick work of investigators, both Zulocks were arrested, and the child victims were brought out of the abusive home about six-and-a-half hours after their initial contact with the first suspect who’d been downloading the pornography. 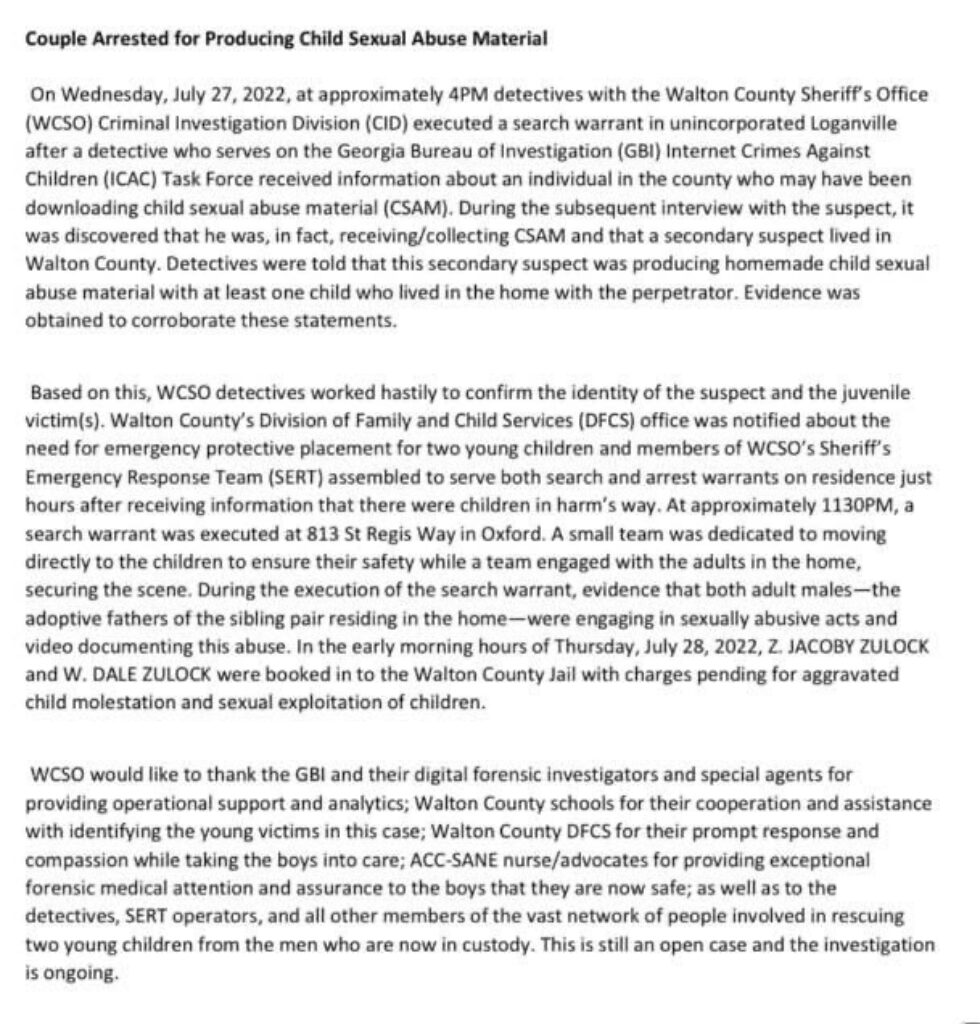 The WSCO’s Facebook page was full of thankful comments from community members happy to see the boys rescued from the abuse.

William Zulock was born William Conley before getting married to husband Zachary Zulock. William is a bank specialist at a Wells Fargo bank, and the Zulock home was listed at just about a million dollars.

Both men appear from social media posts to be a part of a group called Adventures in Gay, which, as YouTube account Gipeca [1] pointed out, “appears to draw a correlation between being gay and Pokemon.” The video posted to the Gipeca account also said that William appeared to be straight previously before “coming out of the closet” sometime between 2011 and 2013. He had several posts with a female named Cassie, who he appeared to be in love before that time.

“William seemed to post random pictures of children,” Gipeca said in his video. “Sometimes, they were with his sister, and they were all young females.”