According to a report featured in the National File, newly released data reveals that the COVID shots pose greater dangers to men under the age of 40 than the actual virus itself – particularly the Moderna brand of these shots.

The report from the National File referenced a series of tweets from Dr. Vinay Prasad, who took to the platform on August 28th to share insights from a recent study detailing the troubling concerns surrounding the Moderna COVID shots and their adverse effects on men under 40.

“It Is Now Undeniable. Vaccine can cause more Myocarditis in Men Under 40 Than COVID-19; Just OUT! Patrone Circ 2022; I have said repeatedly Moderna should be banned in Men<40 FDA failed Americans & this analysis is more complicated Everyone gets breakthrough [infections] eventually.” 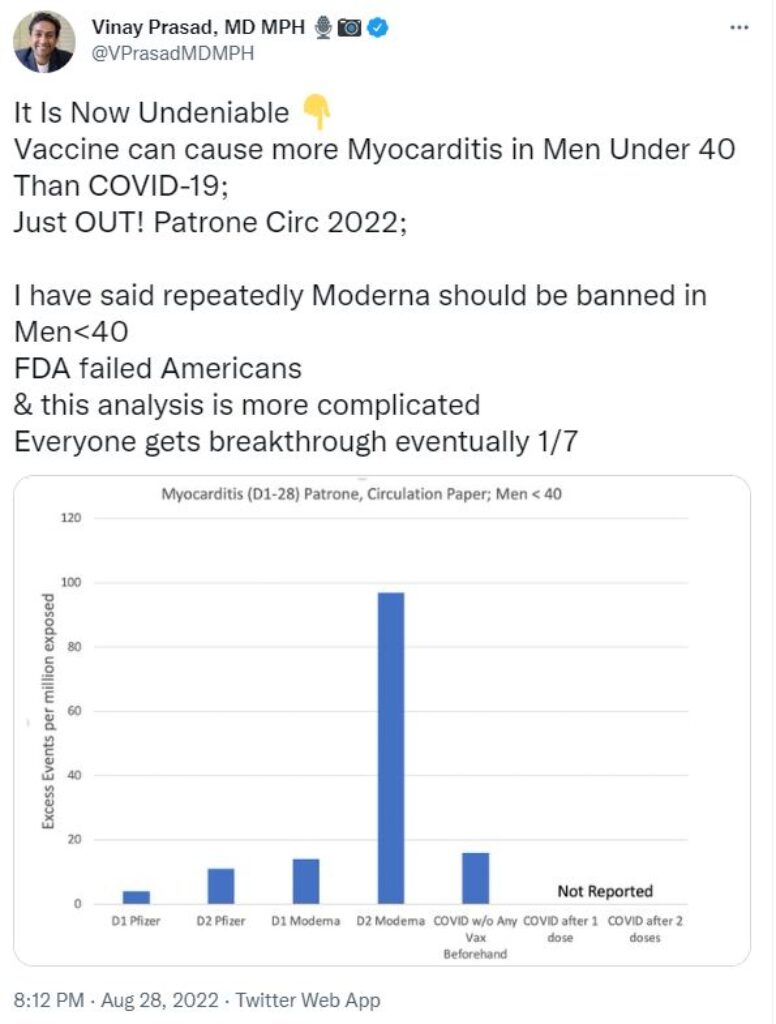 The mentioning of breakthrough infections eventually occurring in the population – be they jabbed or not – is critical in this context, especially considering that health officials, to include the CDC, have finally confirmed that the shots do not protect someone from becoming infected nor spreading the virus around.

But yet with every subsequent exposure to the COVID shots, again, particularly the Moderna iteration, men under the age of 40 are exposing themselves to heart-related risks.

In Dr. Prasad’s thread on Twitter, he bemoaned how the approach to COVID shots were “trapped” between two combatting narratives/factions – namely, those who were opposed to all forms of COVID inoculation and those who vilified people who were skeptical of COVID shots being imposed on everyone.

But another factor Dr. Prasad took issue with regarding the study was how the figures only delved into men under the age of 40, citing how reports have been circulating for several months on these shots posing increased risks for teenage boys to men in their early twenties.

“The other concern is this paper still lumps all boys <40. But boys 16-24 are going to face the WORST balance. Public health, CDC, and FDA failed these boys, by ignoring a safety signal. Author need more bins The goal was to vaccinate SAFELY. That means you have to act on SAFETY.” 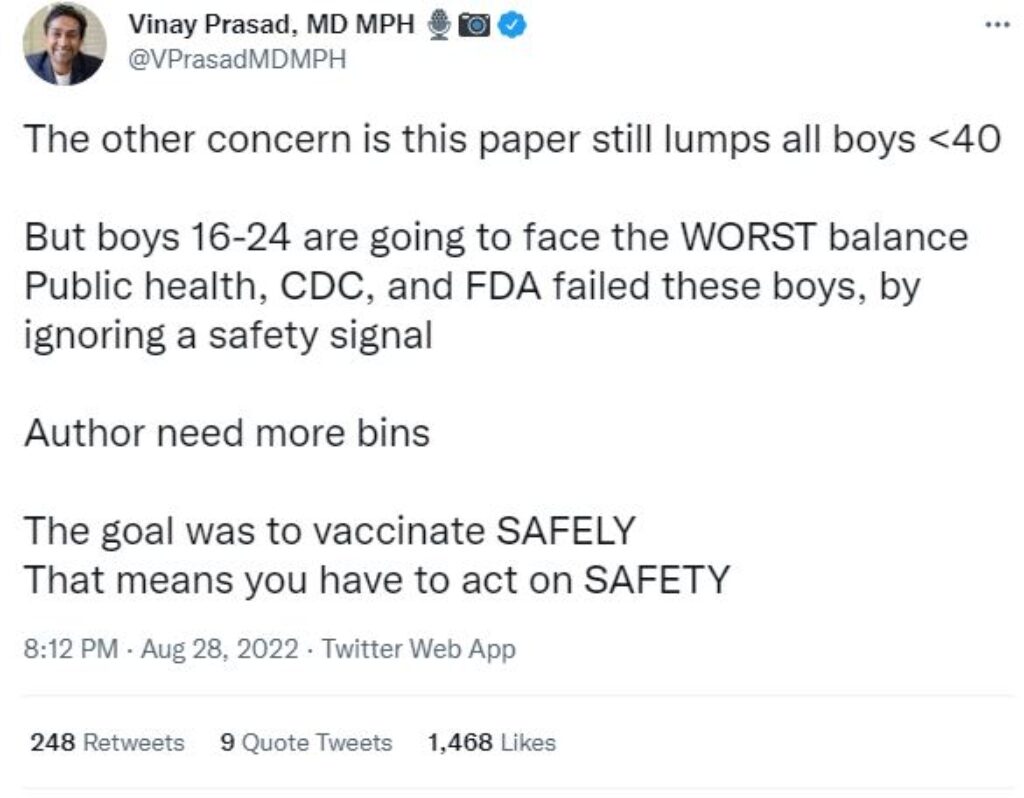 Sadly, Dr. Prasad acknowledged that the United States is lagging behind the actions already taken abroad with respect to the Moderna COVID shots being administered to males under 40, saying the country “missed this opportunity” to mitigate harm.

“Kaiser Northwest and European nations banned Moderna in Men <40; The US missed this opportunity; It was indifferent to men’s health, and seemed to not [want] to deny Moderna business. Now it pushes Boosters w/ sizable uncertainty. White House is drunk on power.” 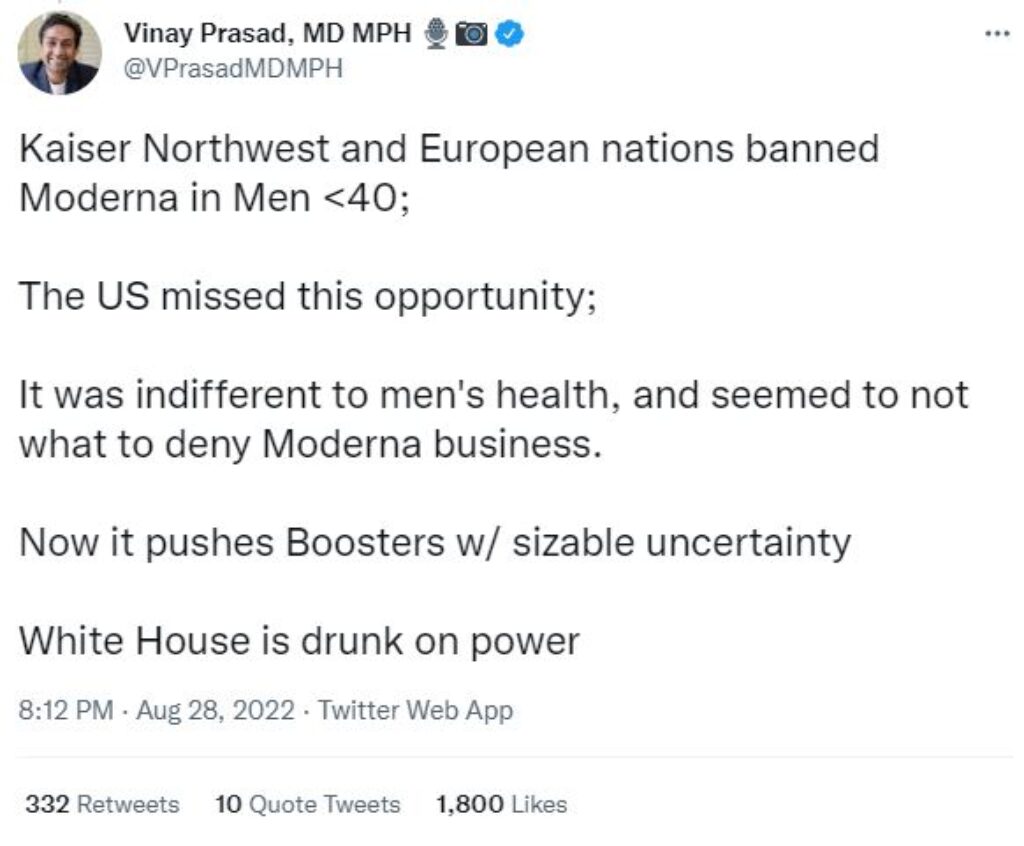 As noted in previous reports, heart injuries aren’t the only troubling adverse effect linked to the COVID shots, as between December of 2020 and May 13th of 2022, there have been 1,092 reported cases of brain injuries related to the COVID-19 shots listed on the VAERS database. In comparison, there were 1,068 reported cases of brain injury affiliated with all other vaccines over the previous 30 years.