"They found the one guy in the world who owns a Liz Cheney shirt."

In a series of collective responses that are equal parts backlash and general mockery, actor Kevin Costner’s recent endorsement of Republican Rep. Liz Cheney has also managed to attract some ridicule from Republican Rep. Lauren Boebert.

On August 1st, the Wyoming congresswoman, who has largely fallen out of favor among Republican voters, took to Twitter to share a picture of Costner, with the actor adorning a “I’m for Liz Cheney” shirt. 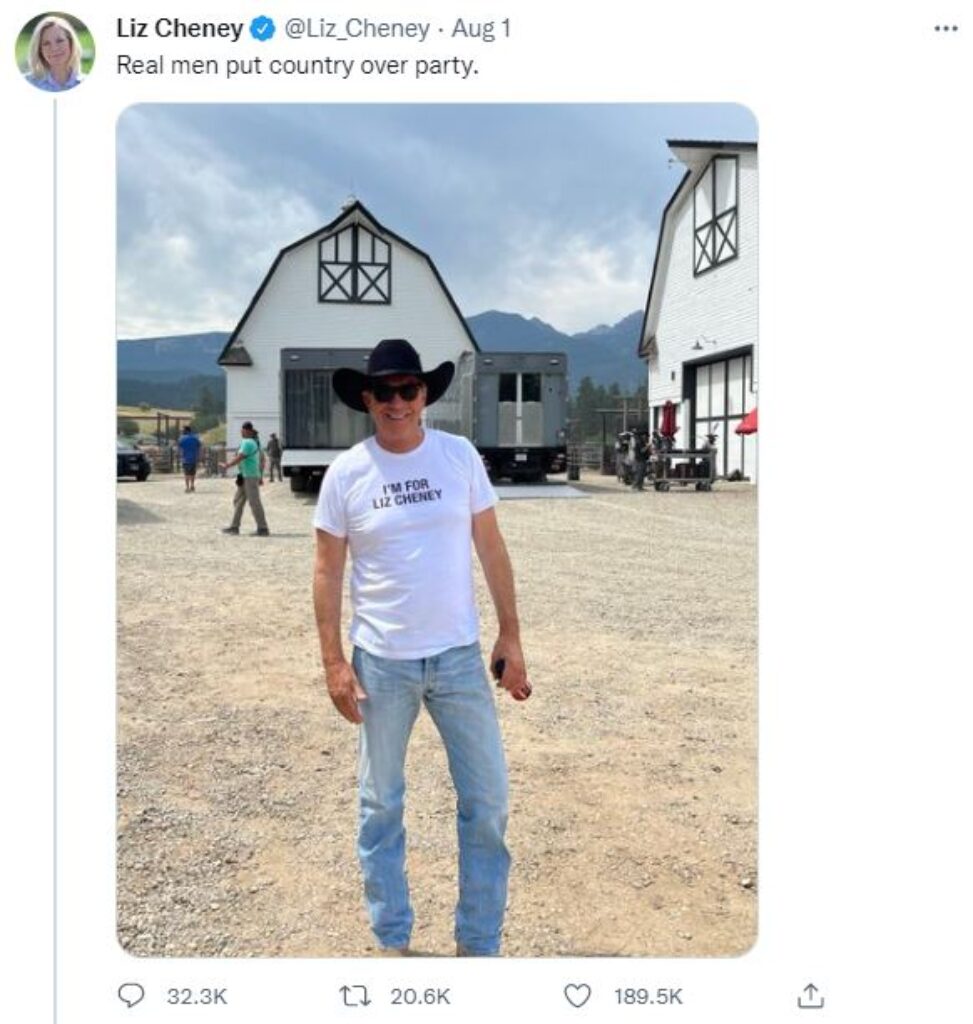 While notable endorsements either from politicians or celebrities is commonplace in the world of politics, Rep. Cheney toting Costner’s endorsement with an accompanied sentiment of, “Real men put country over party,” has managed to draw both criticism and heckling from Republican voters and politicians.

Political activist Scott Presler was among those to poke fun at Cheney, pointing out that Costner doesn’t even live in Wyoming and that her flaunting his endorsement as being evidence that she can’t even find someone in her own state who will endorse her.

MORE NEWS: Kilmeade: Trump Raid Is Not the First of Its Kind

“Liz couldn’t find a Wyoming voter that supports her, so — naturally — she had to settle for an actor that lives in Colorado. Sounds about right.”

Costner’s endorsement of Cheney is hardly surprising, considering in a 2020 interview with The Daily Beast, Costner admitted to having endorsed Pete Buttigieg for the 2020 election and having vocally endorsed Barack Obama during his bids for the White House.

Rep. Boebert chimed in on the Costner endorsement, making a pun out of the actor’s career with, “How did Kevin Costner go from Dancing with Wolves to slumming with RINOs?”

Washington Times contributor Tim Young also dished out some humor directed at Cheney’s stunt using Costner, writing, “They found the one guy in the world who owns a Liz Cheney shirt.”

As noted in previous reports, it’s beginning to look as though Rep. Cheney’s chances of winning her primary are extremely slim, with even CNN struggling to find people on the ground in Wyoming who openly support Cheney for reelection.

It’s no mystery at this point that Cheney’s political career within the Republican party has been extensively damaged by her continued assertions – through her exploits with the January 6 committee – that Trump is somehow guilty of plotting a coup d’état, part of the ever-evolving theatrical narrative crafted by the very committee she sits on.

The January 6 committee, and therefore Cheney, have routinely taken various events and statements out of context, going so far as to tout hearsay allegations from staffers as some sort of smoking gun. Some of these hearsay allegations have even been shown to be false or implausible.

Of course, Cheney isn’t oblivious to the fact that she’s worn out her welcome in the Republican party, as she was found earlier this summer to be distributing campaign flyers urging Democrats to switch political parties so as to have her secure the Republican nomination. However, considering that over 70% of Wyoming residents voted for Trump during the 2020 election, this tactic doesn’t seem like it would provide enough momentum to push her across the primary finish line.

Stick to acting Kevin, your good at that. People will stop watching your hit show if you utter the names Obama, Buttigieg or Cheney again. Typical Hollywood libtard!

Too late! He has been removed from my list

Cancel this asshole, along with the ugly spawn of Darth Cheney. Evil needs to be removed if the country is to survive.

Kilmeade: Trump Raid Is Not the First of Its Kind