"He should spend... less time helping his crazy wife and family get rich on China!"

WASHINGTON, DC – Senate Minority Leader Mitch McConnell’s comments expressing doubts about the GOP reclaiming the Senate in the midterms have been perceived as a slight against the American First candidates, sparking a backlash against McConnell – and among those critics, McConnell has attracted is none other than Donald Trump.

On August 18th, McConnell predicted that the Republican party may not be able to take the Senate in the upcoming midterms, stating, “I think there’s probably a greater likelihood the House flips than the Senate. Senate races are just different. They’re statewide. Candidate quality has a lot to do with the outcome.”

Needless to say, McConnell’s comments about “candidate quality” suggests that he sees a lack thereof among the slate of Republicans who snagged their primary races – with many of those Republicans being among the America First movement.

Republican Senator Chuck Grassley recently came to the defense of McConnell’s expressed doubts about a red wave in the Senate, telling Fox News on August 19th that McConnell’s words were meant “to wake people up” ahead of the November midterms.

“I think that the motive that McConnell would have would be that he wants to wake people up to the fact that this is an important election coming up and that you better be on your toes, both as a candidate, and people are supporting Republicans, or maybe we wouldn’t want to win control of the United States Senate.”

But Sen. Grassley’s attempts to patch up McConnell’s comments simply aren’t working, as the Senate Minority Leader’s comments are also being digested as him tacitly rooting for Democrats in the Senate races so that he can cling to his power within the Republican party by thwarting America First candidates who’d likely upend the status quo.

JD Rucker from The Liberty Daily is among those calling out McConnell, with the pro-America First personality taking to Twitter with, “Mitch McConnell does not represent Republican Party voters. He represents everything about the [GOP] that conservatives and populists hate. He should not be Senate Majority or Minority Leader after this year.” 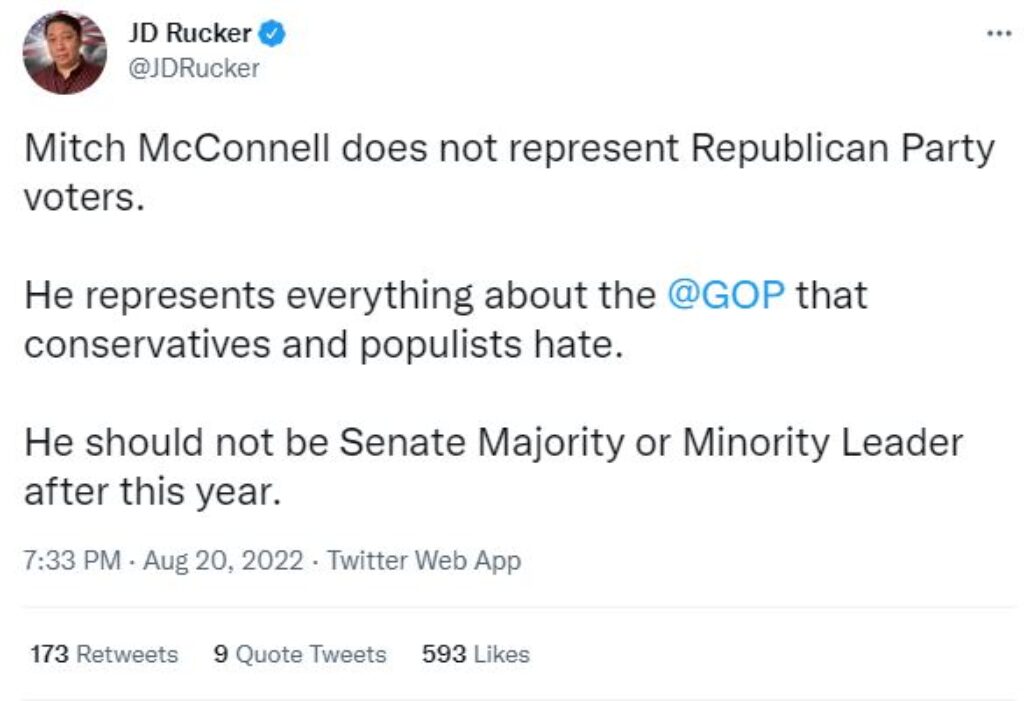 But perhaps the most notable person to come after McConnell over his comments is former President Trump,  who took to Truth Social to accuse McConnell of “openly” disparaging GOP candidates ahead of the midterms.

“Why do Republicans Senators allow a broken down hack politician, Mitch McConnell, to openly disparage hard-working Republican candidates for the United States Senate. This is such an affront to honor and to leadership. He should spend more time (and money!) helping them get elected and less time helping his crazy wife and family get rich on China!” 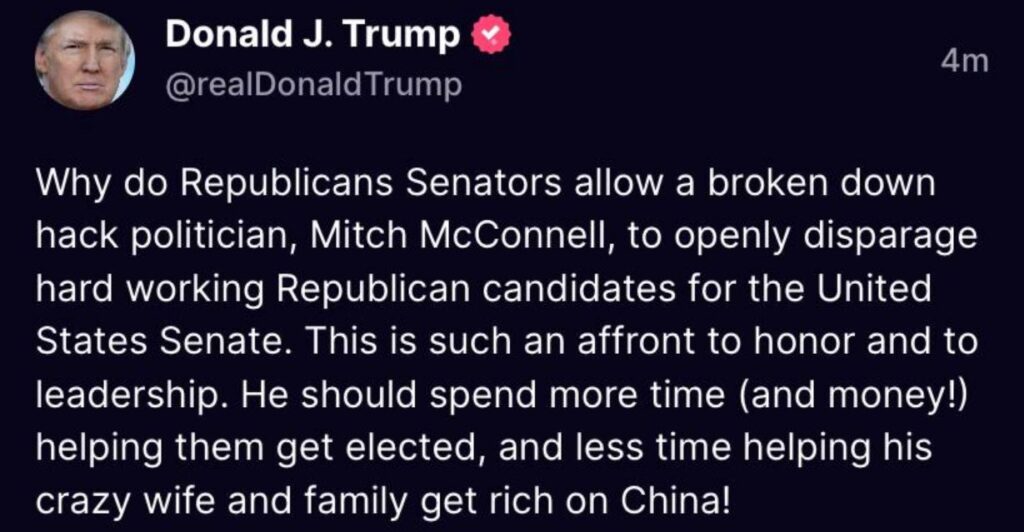 In today’s Republican party, arguably one of the worst political enemies to have is the former president, considering his mere endorsement of a candidate has proven to be one of the most politically valuable things within the party today.

And for those who attract Trump’s ire, one need only look at the recent primary where Liz Cheney failed miserably.

Expose him Mr. President, the American people have your back. We the people, are very tired of Senator McConnell’s antics and manipulative politics. I think the people of Kentucky, must feel the same. He’s always presented as somebody who knows how to play, the DC game. There in lies the problem. Playing games are not good for the citizens of America. We need a fresh look at how to govern America. McConnell needs to know, he needs Trump, more than Trump needs him. Time for new America first leadership in the Senate. Sorry Mitch, you’ve outlived you usefulness.

Could A Tesla Phone Could Disrupt The Cellphone Market Within Six Months?