Should anyone who pushed mandates should be held criminally & civilly liable?

THAILAND – A new study released out of Thailand has revealed that a startling percentage of young adults who received the Covid jab now have “cardiovascular injuries.”

The study ultimately included a total of 301 students from two schools, ages 13-18, who received a second dose of the shot (BNT162b2 mRNA COVID-19 “vaccine,” which is the Pfizer shot). Of those, a whopping 29.24% of them had “cardiovascular effects” from the shot, “ranging from tachycardia, palpitation, and myopericarditis.”

“The most common cardiovascular effects were tachycardia (7.64%),” the study said, “shortness of breath (6.64%), palpitation (4.32%), chest pain (4.32%), and hypertension (3.99%). Seven participants (2.33%) exhibited at least one elevated cardiac biomarker or positive lab assessment…Myopericarditis was confirmed in one patient after vaccination. Two patients had suspected pericarditis, and four patients had suspected subclinical myocarditis.”

Eighteen percent of the youth had “abnormal EKGs” after having received the shots.

“Why isn’t a study like this being done in the US?” The University of California, San Francisco Professor Vinay Prasad said. Professor Prasad also wrote an article in Real Clear Health in May of this year that concluded, “It’s time to get back to normal,” while exploring the vast differences in mask and shot mandates for children across the states.

Dr. Tracy Hoeg, who is no stranger to Red Voice Media and has conducted studies of her own that have been taken out of context to fit the mainstream narrative, asked the Thai research team about the presence of heart issues prior to the study, if known. She tweeted, “I heard back from the Thai research team. Prior to study start, they say <1% had ‘abnormal’ EKG & specified those ‘abnormals’ were all ‘normal variation.’ They tell me their study has been accepted for publication in a peer review journal and should be out soon.”

The conclusion of the study read, “Cardiovascular effects in adolescents after BNT162b2 mRNA COVID-19 vaccination included tachycardia, palpitation, and myocarditis. The clinical presentation of myopericarditis after vaccination was usually mild, with all cases fully recovering within 14 days. Hence, adolescents receiving mRNA vaccines should be monitored for side effects.”

Information has been circulating that post-Covid, the same age group has a higher rate of cardiovascular issues than post-jab, which, according to Dr. Hoeg, is not true. 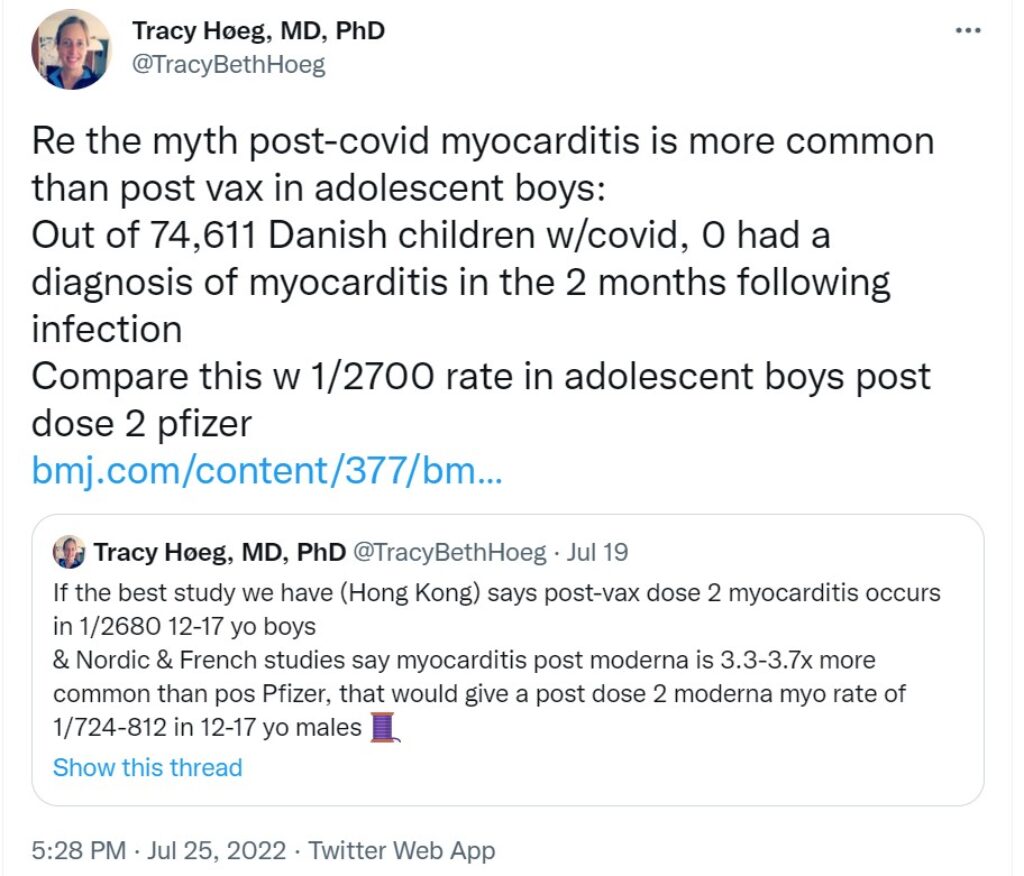 Essentially, she myth busts the notion that covid itself is causing more heart problems in youth than the shots have done.

As such, Denmark ended the requirement and recommendation for those under the age of 18 to receive one or more Covid shots.

In response to Dr. Hoeg’s posts on the Thai study, social media user and doctor Regina Watteel said, “The question is: Why wasn’t such a prospective study done earlier, before mandating vaccines for university students & before mass vaccination in children? Cardiovascular injury, incl myocarditis, was flagged as a serious risk esp for young men, 16 months ago! We know the answer.”

DO NOT TRUST REPUBLICAN MEDICAL KNOWLEDGE
TRUMP and his REPUBLICAN government abandoned the whole country before the virus even hit,closing down advanced medial in China Trump and his REPUBLICAN base, by refusing to wear masks, have prolonged the pandemic and made it more deadly than it should have been. Their selfishness has made them responsible for the deaths of tens of thousands of Americans. PRESIDENT DONALD J TRUMP HAS CAUGHT COVID 19 VIRUS,,,,,TRUMP could not protect HIMSELF or his wife from it . What makes you THINK that he can protect YOU from it with 200,000 americans dead from it already……… REMEMBER TO WASH YOUR HANDS because that is the only health care you will get ,, right now TRUMP and his REPUBLICANS are trying to kick over 50 thousand Americans OFF THEIR HEALTHCARE INSURANCE while in the middle of a PANDEMIC….
The first thing TRUMP CANCELED was our EMERGENCY RESPONSE TEAM….then he LIED about it then he tried to blame OBAMA and then he lied about it some more,,,
Trump called the virus A HOAX,,,,
TRUMP said the virus would DISAPPEAR
HE overruled doctors with his wild guesses….
THE VIRUS IS COMING and we are NOT prepared for it THANKS TO TRUMP..
TRUMP should stop buying golf courses and should now INVESTING IN CEMETERY PLOT LAND, he is not going to let a good epidemic go to waste,
Saving lives is nice BUT TRUMP is talking about MAKING MONEY, think of the fortunes the HOSPITALS and the PHARMA companies will make a KILLING….
WHY spent that money it is Cheaper to let them walk around and infect more people the HOSPITALS will make a FORTUNE of this disease,,,, He dosnt care how many people die he cares about how much money he can get out of it, HE IS AN : ENTREPRENEUR NOT A PRESIDENT…


Trump understood coronavirus dangers and lied about them

Keep parroting the false narrative to support your derangement. Grab your worthless, filthy face diaper, lock yourself in the basement, and go get a few more jabs.

Oh, God. You are SO gaslighted. Any truth you state is marred by a follow-up twisted logic and untruths. BTW–I’ve not been a Trump supporter! I’ve been a life-long Dem.

I’m so sorry for you. Maybe a ‘cult intervention’ would help, if someone cares enough about you to initiate it.

it is a hoax, ever hear of the flu😂

LOL! Another lefty meldown. Call your Mommy and tell her you soiled your diapers again.

Finally some truth is coming out about mRNA and it’s destruction of people.Maybe some sane educated people can add 2+2 now and realize that they have been scammed and this is the “Depopulation by vaccination” as it was sold as vaccine and isn’t