NYC is getting what they voted for...

NEW YORK CITY, NY – The Democratic mayor of New York City, Eric Adams, claimed during a press conference on August 9th that he’d be open to “taking a busload of New Yorkers” over to Texas to help campaign against Republican Governor Greg Abbott’s reelection efforts.

Mayor Adams was responding to a question from the crowd of reporters as to whether he would be campaign for Governor Abbott’s challenger in the gubernatorial race in Texas, to which the New York City mayor confirmed that he’s already been in touch with some “friends” residing in the Lone Star State.

“I already called all of my friends in Texas and told them how to cast their vote, and I am deeply contemplating taking a busload of New Yorkers to go to Texas and do some good, old-fashioned door-knocking. Because we have to, for the good of America, we have to get him out of office.”

MORE NEWS: Joe Biden Asks To Be Compared To The Devil In Strange Tweet [VIDEO]

It’s no secret that Mayor Adams has fomented a particular grievance with the Texas governor, with those frustrations stemming from Governor Abbott giving illegal immigrants the choice of taking a free bus trip to sanctuary cities – such as New York City – after said illegal immigrants have been processed at the southern border.

Prior to being elected as mayor back in November of 2021, with Adams took to Twitter back on October 20th, 2021, writing, “We should protect our immigrants.’ Period. Yes, New York City will remain a sanctuary city under an Adams administration.”

Roughly a month later, after the abovementioned Twitter post, Mayor Adams was talking up “noncitizens” yet again, posting, “I’ve long advocated for the rights of documented noncitizens to vote in New York’s municipal elections. Immigrants make NYC stronger — they should have a say in their government.” 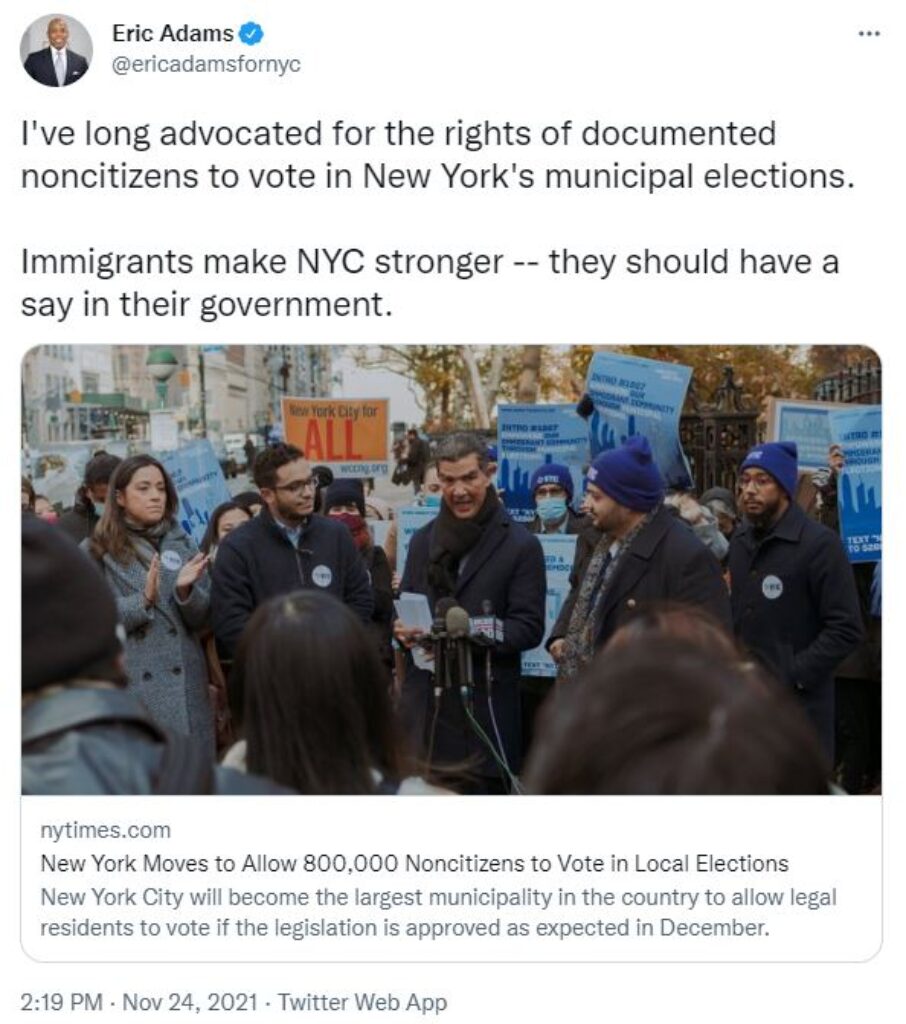 While Adams was on the campaign trail, he was even boasting about how he would work to ensure that ICE couldn’t partner with police to remove illegal aliens from New York City, writing, “From last night’s debate: ‘We need to ensure that [undocumented immigrants] receive healthcare and protection…that ICE is never in a position to partner with the police department and harms them. We also need to make sure we treat them with the respect and dignity they deserve.'”

Yet, Mayor Adams seems to be singing a slightly different tune when his wishes are actually being fulfilled (by the busload) courtesy of Governor Abbott.

On August 7th, after receiving another busload of illegal immigrants that were bused from the southern border, Mayor Adams wrote on Twitter, “[Governor Greg Abbott] used innocent people as political pawns to manufacture a crisis. New Yorkers are stepping up to fix it — that’s our city’s values. But we need the federal government’s help — money, technical assistance, and more.” 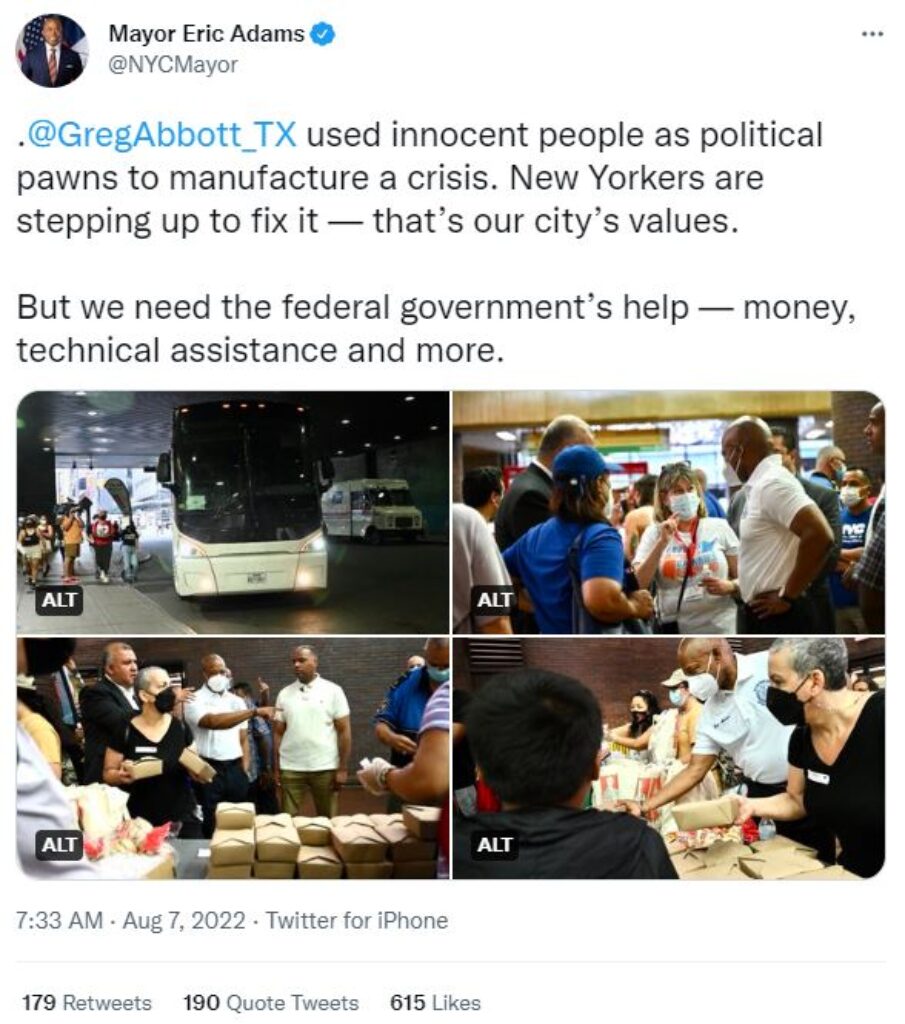 Mayor Adams claiming that Governor Abbott is using illegal aliens “as political pawns” is ironic, considering that is exactly what Mayor Adams did throughout his campaign and time in office. Despite New York City traditionally not having to worry about border-related issues (a.k.a., swarms of illegal aliens), Adams boasted about being a welcoming environment to said population.

Yet, now that Mayor Adams is having to own up to these very ideals he boasted of, he suddenly is taking issue with the matter.

Dems started it, Republicans will finish it!! PERIOD

Typical. Demonrats sh*t the bed, then want EVERYONE ELSE except them, to lie in it.