The Left has a short memory

WASHINGTON, DC – In a single post to Twitter, Republican Rep. Thomas Massie dropped a massive, five-point truth bomb regarding the COVID shots that were released upon society less than two years earlier – and liberals’ heads are exploding as a result.

On August 14th, the Republican congressman took to Twitter with a series of points regarding the COVID shots that no matter how much the left may detest the assertions made, they are all undeniable facts. 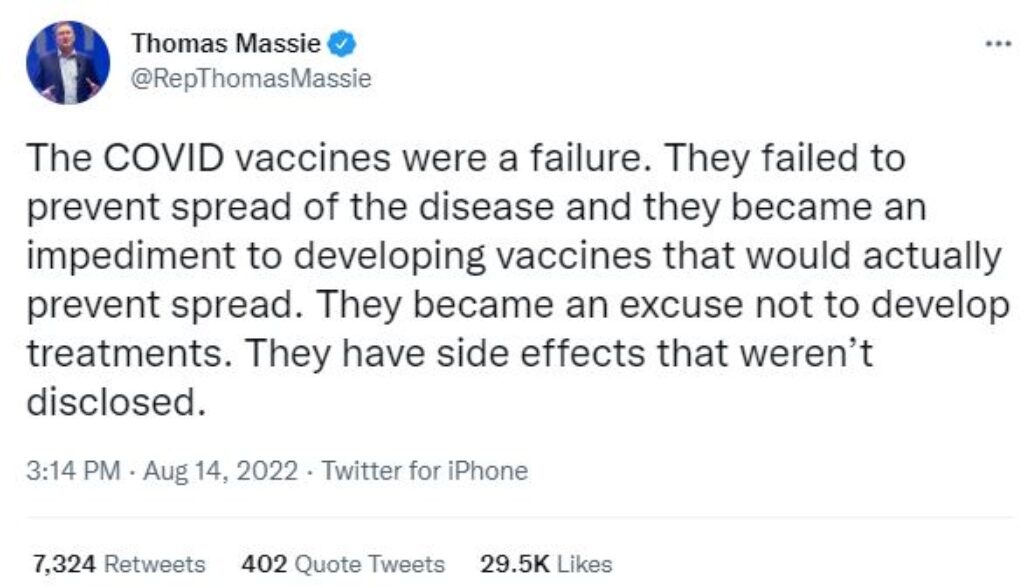 When examining the five points made by Rep. Massie – the shots being “a failure,” they don’t prevent the spread, they impeded development of alternative shots & treatments, and many side effects were undisclosed – it’s hard to argue them considering they’re all generally accurate.

For one, the notion that the COVID shots are a “failure” can be reached by simply reciting the four additional points made by Rep. Massie – again, all of which are true.

Take for example how the shots do not stop the spread of COVID. Even the Mayo Clinic admits that people who are “fully vaccinated” can “still get COVID-19 if they are exposed to the virus that causes COVID-19. These are called vaccine breakthrough infections,” adding that these fully-jabbed people who catch COVID “may spread COVID-19 to others.”

Segueing over to the point about the COVID shots released becoming “an impediment to developing vaccines that would actually prevent spread,” it’s hard to deny that there hasn’t been much of any progress on any kind of shot that can actually “stop the spread.”

Then there’s the portion about these COVID shots serving as an excuse “not to develop treatments” for COVID. It seemed like everywhere COVID was discussed by the authoritative experts, it was always a repeated mantra about getting the shots. It wasn’t until an entire year after the release of the COVID shots that the FDA afforded an emergency authorization for an oral, anti-viral COVID treatment.

And of course, there were the undisclosed side effects that the COVID shots caused, which officials and interested parties fought tooth-and-nail to either shield from surfacing or worked to diminish the credibility of those complaining about the ill-effects suffered after being subjected to the shots.

Of course, leftists who subscribe to the dogma surrounding these COVID shots took immediate offense to Rep. Massie accurately pointing out the aforementioned.

One such person asserted that the only “side affect of the Covid vaccine is that you don’t die from Covid, sorry that disturbs you,” a notion that is categorically false.

Others repeated the revisionist-history take, claiming that the COVID shots “were always to prevent severe illness and death,” which is again another lie since the likes of CDC Director Rochelle Walensky, Tony Fauci, Joe Biden, Bill Gates, Rachel Maddow and countless others parroted the talking point months after the shots were released that they could prevent infection and spreading.

People are forgetting how the hospitals were killing people and saying it was covid, for financial gain. It was a way to control people with fear. Nurse whistleblowers were telling us what they saw, yet people were lining up to get these bogus shots. I guess the fear makes some lose common sense.

from what i have seen, common sense stopped being common over a decade ago.

They never, ever had common sense. They are truth-deniers that preserve and confirm their closely held beliefs through fallacious information, concepts and ideas.

how many times will people accept being lied to b4 they say wtf is wrong with u? i dont understand. are people just that lazy they want/need to be told what to think/believe/and do? are the schools that good at pumping out morons incapable of critical thought?

Seems hydroxychloroquine and vermectin weren’t making money for investors because they were now in generic form. The entire Covid vaccine problem quickly showed itself as a scam.

Everything he said is true. No profession has taken a bigger hit to their credibility than the
medical profession by allowing themselves to be told what to do! Ballers, spineless so called professionals!

Gorillaboy. What you said. The Medical profession has lost all credibility. Doctors know the ingredients in medication they give their patients. Wonder if they they were told the ingredients that were in the covid jabs and that if it would be harmful ?. Cant understand why doctors would be obedient to orders when they know something is wrong. I can understand what you said following orders is not a defence when you willingly murder people for a paycheck. Why are Judges and Law enforcement not doing anything about it in many countries over the world?.

$$$’S AND ccc’S NOTHING MORE AND NOTHING LESS !

They weren’t designed to stop the spread. They were designed to install a bio network in humans that is connected to and controlled by the internet.

yes siree, sent a nice vid (spanish doc) explaining that to
some folks, tested with phones at a woodsy location
Many of the people were generating a tracking signal
Ooh, my ‘old’ and ex friends, they couldn’t go there yet,
they are all jabbed up. Its too much too fast I suppose.
but hey they still wanna kill or at least discredit the messenger.:{
I am convinced the graphene is already not letting their thoughts ‘go there’. ! Wish I could test for it in my own blood and body,
via enviromental and food exposures….grr….best Joe

The COVID was released on purpose to help the SOCIALISTIC, COMMUNISTIC, LIBTURD, DEMONRAT PARTY LEADERS force the people to be CONDITIONED by them to accept the SOCIALISTIC PROPAGANDA & give over their rights to object to the GOVERNMENTS ridiculous control

Depopulation is the key for these shots. The people were murdered in the hospitals, plus the jabs are killing fast or slowly. I pray to God someone will be held accountable for mass murder. We know who they are and one is in the WH. He is insistent on making Fed employees take the death jab. What a monster. I’m sure oBummer is telling JB what to do and how to do it. He said,”He wanted to be giving orders to someone in the WH so he could run our country by proxy”.

For what Massey said, such a mild statement,
it does not adquately convey that a full genocide has
been deployed. That it qualifies as a ‘truth bomb’
is a testimony to how far down a hole we are.
Kudos to Massey, probably will get him banned from that platform.

The first lie was they called it a ‘vaccine’. If they called it what it rally was, an experimental mRNA injection that changes your DNA to produce a spike protein, nobody in their right mind would’ve signed up for that. The second lie was that it was a dangerous and deadly virus that would kill millions. And then the lies piled up after that.

All the data provided by Representative Massie is of no surprise to me I have heard the same claims made by reputable physicians.

Is Police/society going to get the culprits charged and jailed for life for frauding society about the harm from taking the vaccines and still today promoting the vaccines, and deaths resulting from the vaccines.

Those who do not want to believe the truth of a thing because it conflicts with their worldview will always, always deny that truth to protect their beliefs and prevent a personal change.

Change, by definition, is painful. Humans don’t like pain. Recognizing change requires attention and subsequently taking action upon newly incorporated information. Once the information is recognized as a new truth there is no going home again, making immediate change is necessary because you can’t unlearn a thing. If this fact is not in everyone’s mind it certainly should be so we can understand the gaslighted masses’ mentality. It’s simple psychology 101. The majority of people must be dragged along for a very long and extended period of time at the tail of any argument (no matter the subject) in order to ‘see’ any truth that would change their lives for the better. Why? They do not want to see it. They practice willful ignorance to avoid TRUTH = PAIN.

Woketards have no possible hope of recovering from their compliant stupidity without a huge whack on the head that gives them the necessary ‘ah-ha’ moment already secured by the awakened crowd for many, many years/decades, depending on the individual.

We should all look around seriously for the one big stick. Anyone know what it is? I’d like to know. Starvation? War? Slavery? Poverty? Death by injection? How does one extirpate willful ignorance from truth deniers? It’s certainly NOT a fear of disinformation filled propaganda because the stupids lined-up to be murdered and murdered again–still are–and they defend it. If you can, remember the Star Trek Season 1, Episode 23 “A Taste of Armageddon. It’s a good example of where the truth deniers sit in their minds. LIne-up! Be exterminated for the good of the community!

Kuđos Thomas Massie whose moral compass reveals the pristine path of TRUTH re. €vil obfuscation’n pernicious unçinatory crimes perpetuated ‘gainst a largely unwary humanity. . . Many of whom are now maimed and/or may die soon! Their untimely demise will’ve been a function of deliberately toXified lab confections that were knowingly introduced into others’ bodies via induced lethally infective injections. . . Uh-Oh! Đo we đetect blatant CRIMINALITY at play!? Why YES inđeeđ we đo. . . Pfffft!

Do you think anybody in DC cares. They went along with this false narrative of shots and masks (except for themselves, who went where they wanted to without masks) and tried to break the spirit of the people.