What was it that Stalin (Biden) said about who counts the votes?

LOS ANGELES, CA – The petition to recall Los Angeles County District Attorney George Gascon has fallen flat after the county asserted that nearly 200K of the over 700K signatures obtained in the effort were “invalid.”

Despite the heavy presence of progressives in California, there was a growing ire among voters within the state due to progressivism getting a bit out of hand with respect to district attorneys. For example, San Francisco D.A. Chesa Boudin landed himself the recall treatment earlier in 2022 and got ousted after his soft-no-crime approach left even the most liberal of constituents seething.

And those frustrations that manifested in San Francisco were also growing in Los Angeles, where D.A. Gascon was also viewed largely as being another soft-on-crime persona whose antics were allowing crime to expand and emboldened wrongdoers simultaneously.

In fact, when Boudin was recalled back in June, a representative from the Recall Gascon Campaign stated, “Tonight showed that voters from every community and every walk of life, regardless of political ideology, are rejecting pro-criminal policies that are masked as criminal justice reform. George Gascon and Chesa Boudin’s failed social experiments have destroyed communities while doing nothing to meaningfully reform the system. If LA County voters sign and return their recall petitions, Gascon will be walking the same plank in the near future.”

The effort had been underway to gather signatures to get Gascon ousted via a ballot initiative, with 715,833 petition signatures being submitted.

“Based on the examination and verification, which conducted in compliance with the statutory and regulatory requirements of the California Government Code, Elections Code, and Code of Regulations, 520,050 signatures were found to be valid, and 195,783 were found to be invalid.”

Fox News reported that the breakdown of these allegedly invalid signature consisted of “more than 88,000 were not registered, 43,593 were duplicates, 32,187 were a different address, 9,490 were mismatched signatures, 7,344 were canceled, 5,374 were out of county addresses, while more than 9,300 fell under the category of ‘other.'”

As noted in the report from Breitbart News, there were 3,422,585 vote-by-mail ballots cast in Los Angeles County during the 2020 election, with mismatching signatures being cited on 12,135 mail-in ballots cast (a figure not far from the 9,490 allegedly mismatching signatures from the Gascon recall effort that, again, represented about a fifth of the county’s mail-in ballots from 2020).

Gascon is, of course, lavishing on his ability to keep releasing violent offenders not yet rehabilitated, taking to Twitter on August 15th with, “Grateful to move forward from this attempted political power grab – rest assured LA County, the work hasn’t stopped. My primary focus has been & will always be keeping us safe & creating a more equitable justice system for all. I remain strongly committed to that work & to you.” 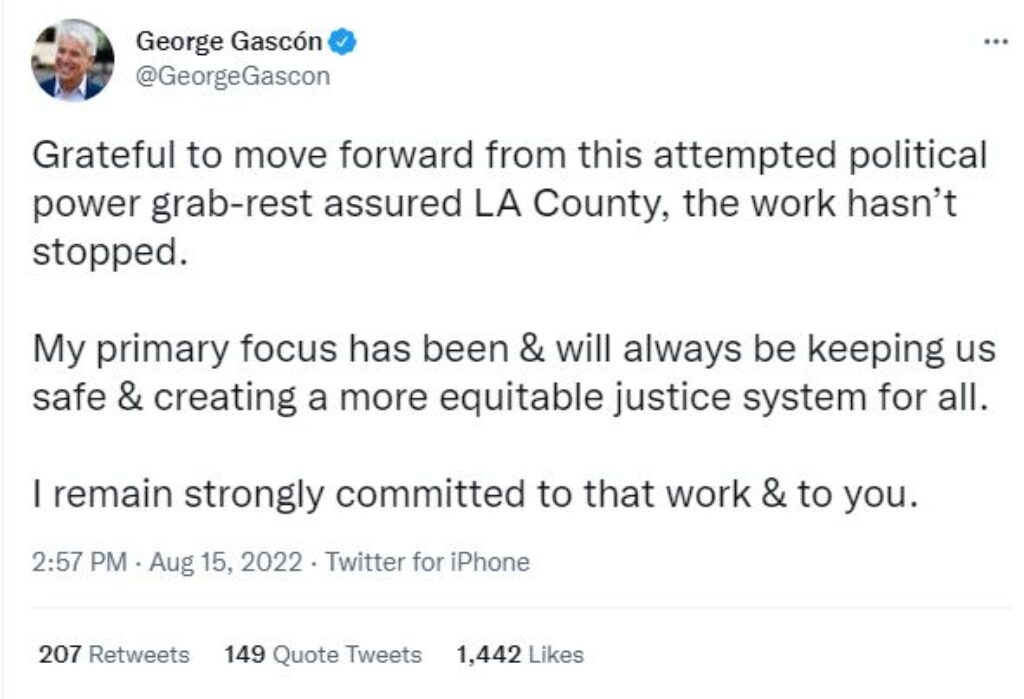 It may be a long hard slog…but the rulling out of that many signatures should be challenged. Los Angeles can be crooked as hell…and the courts are no better. Still we must ALL fight back against this OBVIOUS corruption. Keep taking it to a higher court. You may want to try a violation of civil rights claim and/or fraud and deceit.

I hope that if Trump or whoever wins in 2024, investigates into the 2020 election fraud and prosecute all responsible. Fire all the FBI and DOJ, clean House, drain the swamp. Investigate Hunter’s laptop from hell, Hillary’s e mails, Russian collusion, the FBI raid, and send the Kenyan deceiver Obama to where he’s really from-Kenya. Send all the fkn democrats to China, damn traitors. Finally DEPORT EVIL Soros a hole.

Elections in Democrat ruined states are a joke these days.The Illegals vote and are counted and any legal vote is discarded.Hope California loves thier criminal leaderships and also the criminals running the streets

Rand Paul Issues Update on Fauci: “We’ve Got Him Red-Handed, and He Won’t Get Away”