"It would be unprecedented in history for a vice president to be summoned to testify on Capitol Hill."

MANCHESTER, NH – Former Vice President Mike Pence doesn’t seem to be doing himself any favors in the realm of garnering support from the Republican base, as he recently stated during an event in New Hampshire that he’d be open to testifying in the January 6 committee hearings.

Pence made the comments on August 17th while speaking at the Politics & Eggs breakfast of the New Hampshire Institute of Politics, which is reportedly a spot oft frequented by individuals eyeing down a run for the presidency.

One of the event coordinators asked Pence while prefacing the question was related to the House select committee investigating the January 6 incident at the Capitol, “If they were to call you to come in to testify, would you be agreeable?”

Pence responded with, “If there was an invitation to participate, I would consider it, but you heard me mention the Constitution a few times this morning. Now in the Constitution, we have three co-equal branches of government, and any invitation that would be directed to me, I’d have to reflect on the unique role I served as vice president. It would be unprecedented in history for a vice president to be summoned to testify on Capitol Hill.”

Apparently, there have been talks with Pence about testifying before the House select committee, according to past comments from Chairman Bennie Thompson, but nothing has been set in stone as to whether this would come to fruition.

In other comments made by Pence during the August 17th event, he also took aim at those within the Republican party who are calling out the FBI’s corruption, telling the crowd, “These attacks on the FBI must stop. Calls to defund the FBI are just as wrong as calls to defund the police.”

Of course, much of the recent ire directed toward the FBI stemmed from the highly controversial raid conducted at Mar-a-Lago earlier in August, an issue that has not resonated well with elected officials as well as Republican voters.

Despite claiming that verbal attacks on the FBI should cease on August 17th, Pence was singing a slightly different tune on August 9th – one day after the Mar-a-Lago raid – putting out a trio of posts on Twitter claiming how the FBI’s actions “undermines public confidence in our system of justice.”

“After years where FBI agents were found to be acting on political motivation during our administration, the appearance of continued partisanship by the Justice Department must be addressed. Yesterday’s action undermines public confidence in our system of justice, and Attorney General Garland must give a full accounting to the American people as to why this action was taken, and he must do so immediately.” 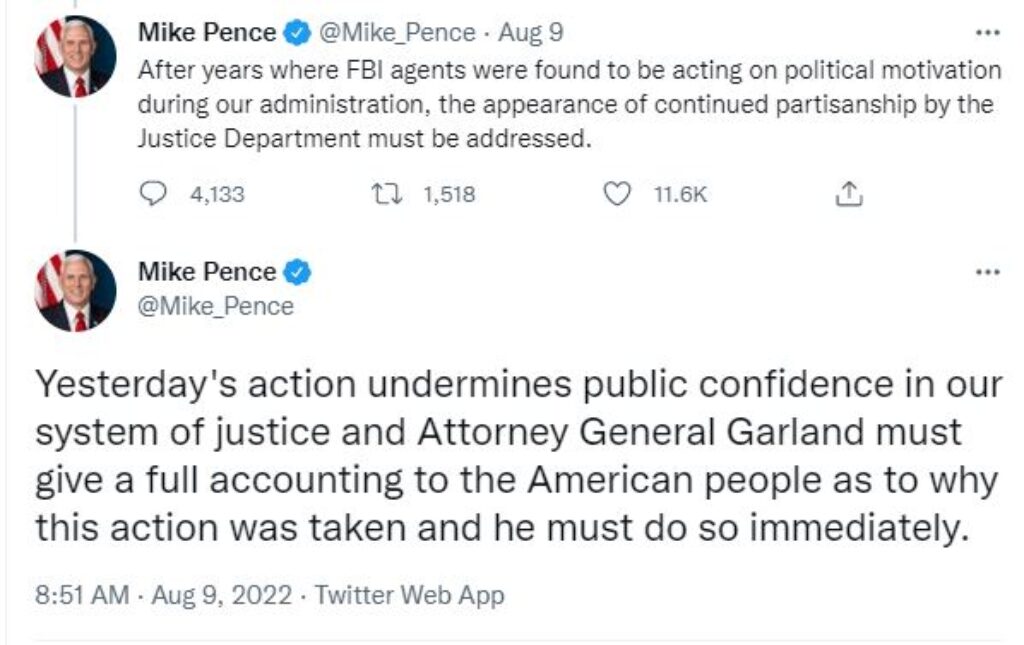 Pence has been causing a stir for quite some time with various comments and positions that simply don’t adhere to what Republican voters are seeking from elected officials, such as his take that states shouldn’t be getting involved in protecting their borders that run along Mexico.

TRUMP is A flight risk LOCK HIM UP….
TRUMP and his Republicans  SENT armed people to the capital and they had plans TO KILL V/P PENCE,,,,what is Pence waiting for ? HIM TO SUCCEDE,
Capitol Police Sergeant Aquilino Gonell:
“They kept saying, ‘Trump sent me. We won’t listen to you. We are here to take over the Capitol, we’re here to hang Mike Pence
QAnon Shaman plannaed to ‘capture and assassinate elected officials’, say prosecutors and left a note for Mike Pence saying ‘justice is coming’ during Capitol riot
• Federal prosecutors are seeking the detention of Jacob Chansley of Arizona
• He is the horned shaman and QAnon conspiracy theorist pictured in Capitol riots
• Chansley surrendered himself to the FBI in Phoenix on Saturday, January 9 Capitol riot: ‘QAnon Shaman’ Jacob Chansley sentenced to 41 months in prison
• Prosecutors say he and others planned to capture and kill elected officials
By CHRIS JEWERS FOR MAILONLINE and REUTERS and AFP
PUBLISHED: 01:05 EST, 15 January 2021 | UPDATED: 08:08 EST, 15 January 2021

TRUMP is A flight risk LOCK HIM UP….

Liz Cheney pushes the DOJ to charge Trump, says passing on prosecution if there’s enough evidence risks the US no longer being ‘a nation of laws’

Rep. Liz Cheney on Thursday said that DOJ prosecutors risk harming the US reputation as “a nation of laws” if they do not charge former President Donald Trump despite there being sufficient evidence.
In an interview with CNN on Thursday, Cheney said the “facts and the evidence are there” to sustain charges against Trump over the Jan. 6 Capitol riot.

President Trump had nothing to do with what happened Jan6. He gave his speech and told people to go to the Capitol and PEACEFULLY demonstrate. The REAL culprits are Pelosi (refusing Trumps offer of national guard troops),FBI infiltrators, antifa, obama, and the deepstate (aka swamp). Pence caused a lot of the anger by not faithfully discharging his duty as V.P. The government trying to cover up crap, but it STILL SMELLS !

Pence is the biggest turncoat that ever disgraced the whitehouse. He calls himself a Christian but he is anything but. America would never be in the failed state its in today if Pence would have supported his President.

Pence is a coward and a traitor. And I hope everyone can see that. He killed his career by not standing up to true evil instead of supporting it. He is not a christian. He uses his so called faith for political gains. God has turned his back on him, the people of Indiana have turned their backs on him and and soon everyone will be done with him. A token fool lost to history. Throw out the trash.