Felon Points Gun At Police K9; It Doesn’t End Well For Him [BODYCAM]

TUCSON, AZ – Officials released the bodycam footage from an officer-involved shooting that occurred in late-August involving a felon hosting multiple past convictions who was fatally shot outside of a gas station after pointing a firearm at a police K9.

On August 25th, Tucson Police SWAT officers had been tailing 49-year-old Francisco Javier Galarza, with officials saying the surveillance was connected to active warrants out on Galarza for an alleged home invasion and bank robbery.

Officers approached Galarza at approximately 11:51 a.m. as he was walking out of a Circle K convenience store, ordering the suspect to get on the ground. However, bodycam footage from the incident shows Galarza attempting to run from officers. Officials say that’s when Officer Barrie Pedersen released his K9, Kiro, to assist with apprehending the fleeing suspect.

Galarza fell to the ground after the K9 was deployed, with officers immediately circling the fallen suspect. As seen in the bodycam footage, Galarza produces a handgun and starts to point it at K9 Kiro and other officers, resulting in several officers firing upon Galarza.

Following the shooting, officials said the officers on scene provided medical attention to Galarza while awaiting the arrival of EMTs, but despite lifesaving efforts, the suspect was pronounced deceased.

Pima Regional Critical Incident Team, who is assisting with the investigation, confirmed the firearm in Galarza’s possession at the time of the incident was retrieved, describing the weapon as a Taurus G3 9mm that had a chambered round and additional ammunition in the magazine.

Upon completion of the investigation, the Pima Regional Critical Incident Team will hand over their findings to the Maricopa County Attorney’s Office.

According to Arizona Department of Corrections records, Galarza hosts a criminal conviction history dating as far back as 1992, consisting of multiple convictions of robbery and a singular past drug offense. 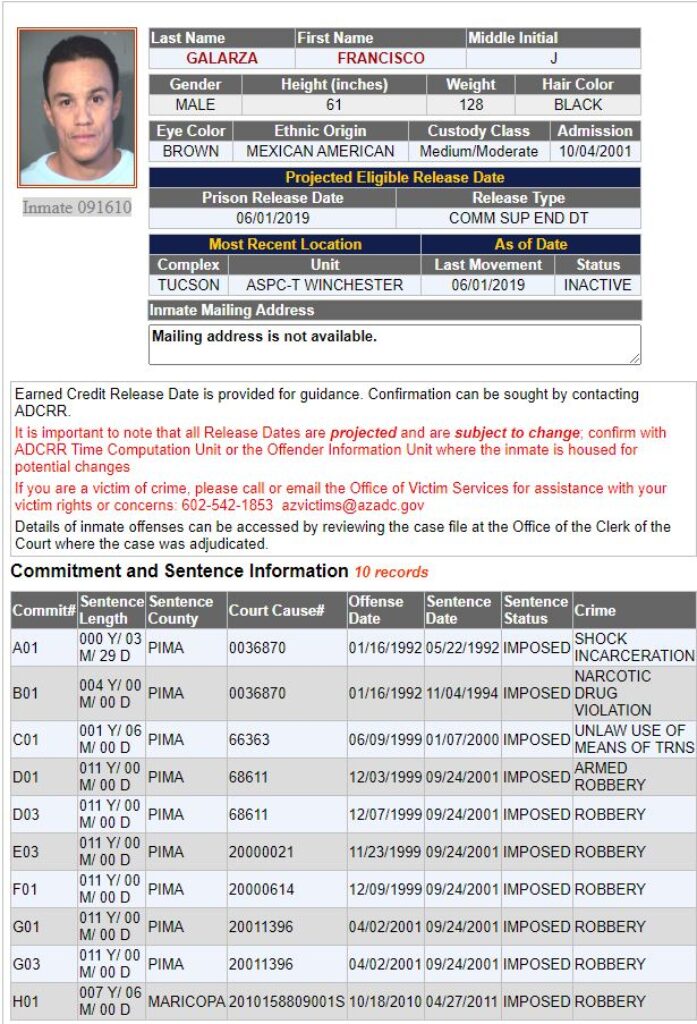 Galarza was first inducted into a “shock incarceration” program in 1992 (which is a 120-day sentence used as an alternative to someone serving out their entire sentence for a respective conviction) but had clearly violated his early release terms and was sentenced to four years in 1994 over the original 1992 drug offense.

In 2000, Galarza was given an 18-month sentence for unlawful use of a means of transportation (basically, taking someone’s vehicle without permission, but without the intent to permanently “steal” the vehicle).

Shortly after the completion of his 2000 case, Galarza was given an 11-year sentence for armed robbery in September of 2001. Galarza would again be convicted of a robbery charge, this time in April of 2011, where he was given a seven-and-a-half year sentence. By May was 2018, Galarza was paroled.

glad they shot him b4 he could shoot the dog. sorry he made some crap ass choices in life cuz the after life…..was nothing compared to this.

Good shooting, officers. That police dog is worth thousands of scu8m balls like that felon thug!

Bravo to officers. One less fake trial to spend money on.