Well that didn't go according to plan...

PHOENIX, AZ – An organization based out of Phoenix that was vigorously fighting against Arizona’s recently introduced voucher program to enable school choice has reportedly conceded defeat in their efforts – ironically days after the same group proclaimed victory in their anti-school choice crusade.

The organization Save Our Schools Arizona framed its outfit as “a non-partisan, community-based organization fighting for strong public schools for a strong Arizona.”

In reality, Save Our Schools Arizona is all about putting a stop to the universal school voucher expansion program (a.k.a., school choice) signed into law by Governor Doug Ducey this past July.

Arizona made history with bringing forth what has been described by the Wall Street Journal as “the nation’s broadest” legislative effort in the school choice movement, with Governor Ducey issuing a statement a month after signing the bill into law calling Arizona “the gold standard for educational freedom in America.”

With Save Our Schools Arizona being an outfit meant to shill for teachers’ unions and protect the irreparable and compromised public education system, the group embarked upon a crusade to vilify the concept of school choice and spreading propaganda that it will somehow rob children of an education.

On September 23rd, Beth Lewis, director of Save Our Schools Arizona, issued a public statement declaring a victory in this effort, proclaiming her and her band of misfits had obtained more than enough signatures to block the voucher program and instead leave school choice vouchers to be determined on the 2024 ballot.

“This wall of boxes represents 141,714 voters who’ve made their voices loud and clear – they have repudiated the schemes of Ducey and the Republican-led state legislature that continually work to defund our public schools in service to their special interests. Arizona voters will now be able to decide once and for all whether their taxpayer dollars should fund public schools that 90% of our Arizona families choose, or whether they should go into private pockets with zero academic or financial accountability.”

For the sake of context, for Save Our Schools Arizona to have gotten school vouchers moved to a 2024 ballot measure instead of simply being implemented as state law, they would have to accrue at least 118,823 valid signatures – with Lewis claiming they’d already obtained 141,714.

Except, there’s one big problem with Lewis’ claims of victory on September 23rd: turns out the group didn’t even come close to getting 141,714 valid signatures.

By September 26th, a mere three days after Lewis asserted victory in defeating school vouchers, it was found to be impossible that Save Our Schools Arizona could’ve obtained that many signatures, as a report from the Arizona Mirror broke down the math behind the “impossibility.”

“According to the Arizona Secretary of State’s Office, the group filed 8,175 petition sheets. That means the group would have needed about 17.3 signatures per petition sheet to hit the number of signatures claimed — an impossibility, as there are only 15 lines per sheet.”

Now, in the event, every line on every one of those 8,175 sheets contained valid signatures, then Save Our Schools Arizona would meet the 118,823 valid signature threshold – but it turns out that a review of the sheets delivered to the Secretary of State’s Office “shows very few sheets have all 15 lines full.”

In fact, Goldwater Institute and Center for Arizona Policy issued a joint statement on September 26th claiming the “anti-parental rights groups only submitted 88,866 signatures,” which runs about 30,000 signatures shy from the aforementioned threshold.

Lewis apparently conceded defeat, telling the Arizona Mirror that she didn’t purposefully mislead the public on the amount of signatures they obtained, chalking it up to “human error.”

“It’s impossible to state how hectic the final week, days, and hours of the campaign were. We did not intentionally fluff any of the numbers. There’s a lot of room for human error.”

The Save, Our Schools Arizona director took to Twitter in the hours after her defeat was cemented, sharing a quote from I.F. Stone that read, “The only kinds of fights worth fighting are those you’re going to lose because somebody has to fight them and lose and lose and lose until someday, somebody who believes as you do wins.” 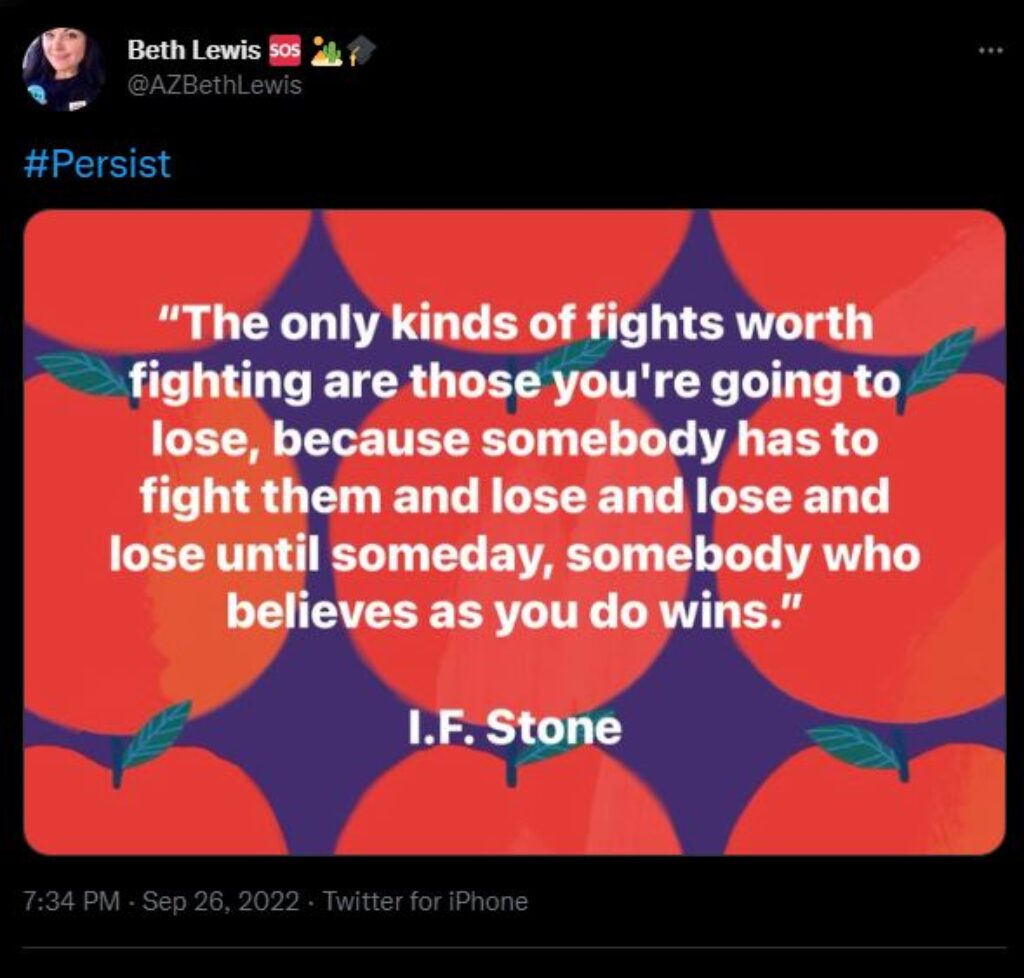 The greatest irony in the quote shared by Lewis is that I.F. Stone was an outed Soviet spy who operated between 1936 to 1939.

A dishonest community organizer?!? This is the first one ever! /Sarc

How many times does it need to be said… School vouchers come with red tape… control and govt intervention…. tax credits give you your own money back to spend on education w/o govt control… schools taking vouchers have to remove religion and follow the pc dictates so what’s the point…