Whitney Webb, of Unlimited Hangout [1], is one of the best investigative journalists in the world, if not the best. She was previously on my podcast [2] for a general chit-chat surrounding 9/11 [3], conspiracies [4], and Jeffrey Epstein.

This time, Whitney joined me on TNT for an overview of her massive new book One Nation Under Blackmail [5]. No, really, it is huge. So big, in fact, that she split it into two volumes.

There are a bunch of books about Jeffrey Epstein, so what makes this one different?

The answer is that this is the first to expose his deep-state networks and general web of intelligence, most of which is suppressed due to it bringing down the house of cards. 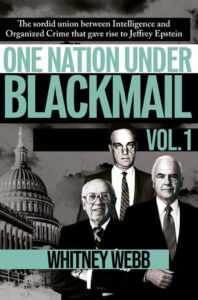 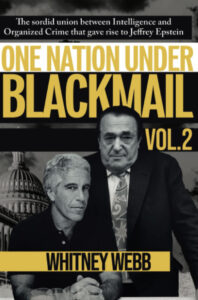 I bought both volumes and so should you. However, as Whitney said in our discussion, if you can’t afford both, then the difference between the two is more-or-less as follows.

It is an unbelievably complex puzzle, but Whitney has pieced together a lot of it. I don’t know of anybody, anywhere, who has Whitney’s remarkably extensive insight.

Jeffrey Epstein was an American sex offender and financier. Epstein, who was born and raised in Brooklyn, New York City, began his professional life by teaching at the Dalton School in Manhattan, despite lacking a college degree. After his dismissal from the school, he entered the banking and finance sector, working at Bear Stearns in various roles; he eventually started his own firm. Epstein developed an elite social circle and procured many women and children; he and some of his associates then sexually abused them.

And that, dear Frodo, is where our journey begins.

Whitney and I touched on various chapters in One Nation Under Blackmail [5], but it’s obviously recommended to read the 900-page book.