WASHINGTON, DC – On September 1st, Republican Rep. Jim Jordan shared a letter addressed to Meta CEO Mark Zuckerberg communicating an official request for the big tech CEO to share all internal/external company communications relating to the suppression of the Hunter Biden laptop story from October of 2020.

It was hardly any big secret that at the time of the New York Post publishing the infamous Hunter Biden laptop story in October of 2020, various institutions worked to discredit the validity of the laptop itself, and big tech platforms worked to suppress or outright bury the story.

But any and all doubt about where the order to suppress said story in the lead-up to the election was cast aside when Zuckerberg appeared on Joe Rogan’s podcast back in August and revealed that the FBI approached Facebook about potential “Russian propaganda” that was about to be disseminated through the media.

Zuckerberg admitted during the Rogan interview that this line dropped from the FBI came shortly before the Hunter Biden laptop story was published, and Facebook opted to lower the distribution/visibility of the story based upon the FBI’s warnings.

This prompted Rep. Jordan to issue a letter to Zuckerberg on September 1st, where a brief synopsis was shared regarding the Hunter Biden laptop story being suppressed but eventually was regarded as legitimate well over a year after the election took place. 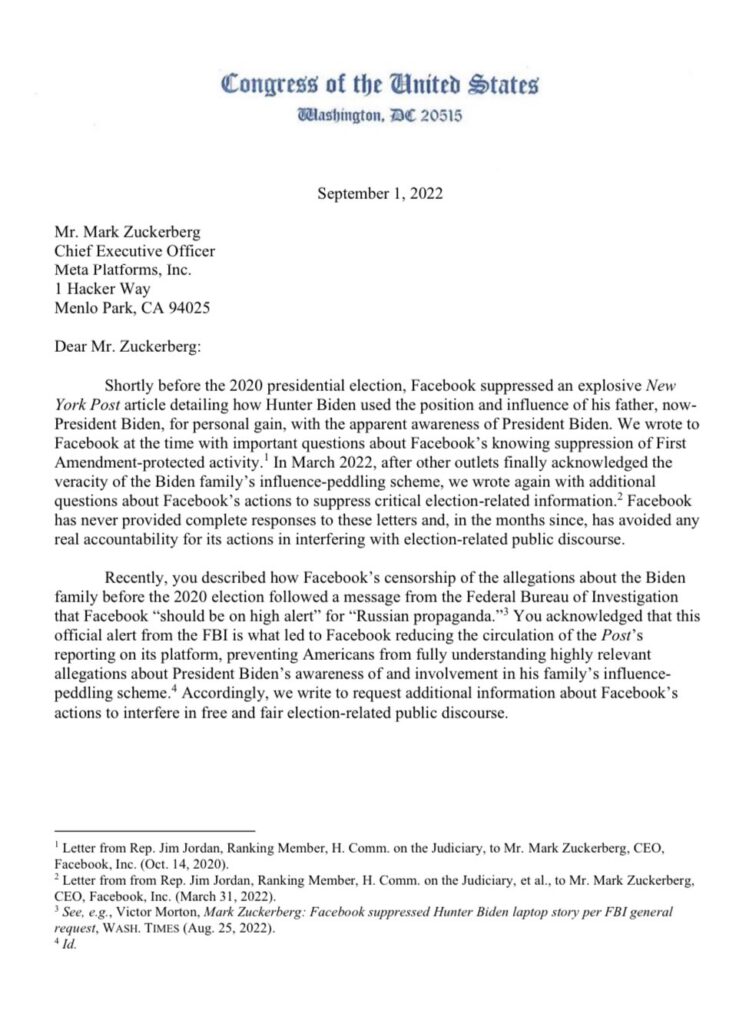 Rep. Jordan also referenced how Congress wrote to Facebook in October of 2020 and again in March of 2022 with respect to “Facebook’s actions to suppress critical election-related information,” but feel as though the company “never provided complete responses to” the inquiries contained in those letters.

The Republican congressman emphasized that the FBI issuing “guidance” to suppress certain stories “highly relevant to the 2020 presidential election” presents alarming threats to the tenets of “public discourse.”

“We have seen in recent months how some in the government have sought to use Big Tech to censor divergent viewpoints and silence opposing political speech. Government-driven and Big Tech-implemented censorship suppress freedom of speech and free thought online in ways that harm public discourse. Facebook’s suppression of the Post article – and allegations of Biden family corruption highly relevant to the 2020 presidential election – following guidance from the FBI is highly troubling.”

The formal letter to Zuckerberg requests that Facebook hand over all “documents and communication” from October of 2020 through the present time “between or among any employee of contractor of Facebook,” with the following parties/topics in mind:

Rep. Jordan’s letter concluded that Congress will be expecting a response, to include all of the above mentioned information sought, by no later than 5:00 p.m. on September 15th.