"Mitch McConnell is killing the Republican Party through weakness and cowardice..."

Forer President Donald Trump made waves in a recent post to Truth Social, claiming that Republican Senate Minority Leader Mitch McConnell harbors a “death wish” with regard to some of McConnell’s moves in support of Democrat-backed legislation.

Trump took to Truth Social on September 30th, lambasting Senator McConnell and alluding that the D.C. careerist is committing an act tantamount to political suicide with his backing of Democrat legislation.

“Is McConnell approving all of these Trillions of Dollars worth of Democrat sponsored Bills, without even the slightest bit of negotiation, because he hates Donald J. Trump, and he knows I am strongly opposed to them, or is he doing it because he believes in the Fake and Highly Destructive Green New Deal, and is willing to take the Country down with him? In any event, either reason is unacceptable. He has a DEATH WISH. Must immediately seek help and [advice] from his China-loving wife, Coco Chow!” 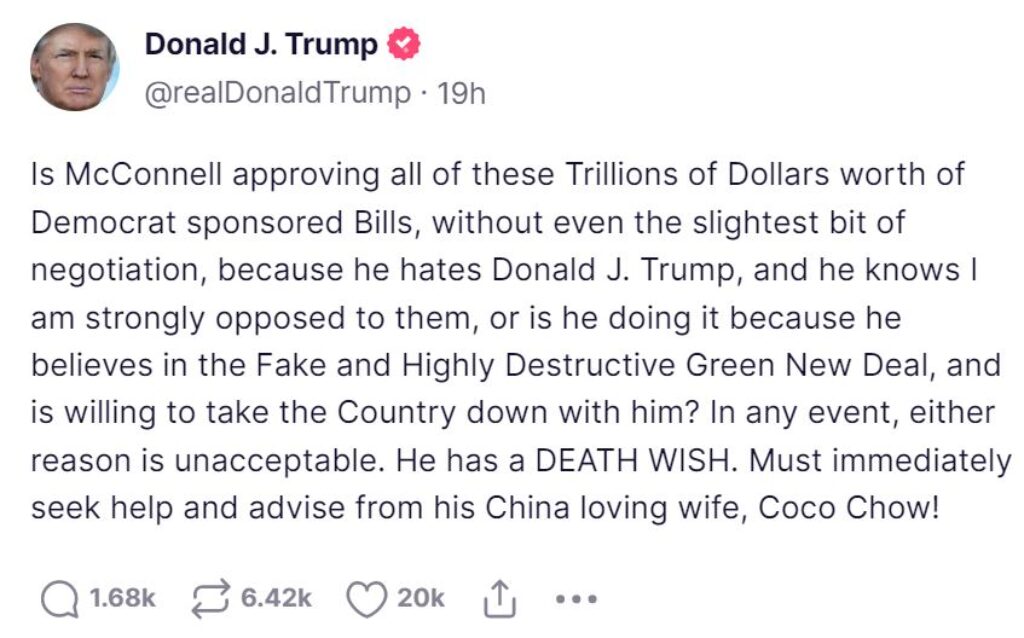 While Trump didn’t mention any specific bills at issue in his September 30th social media post, Senator McConnell did just days earlier vocalize his support over the Presidential Election Reform Act, which is legislation that has garnered bipartisan support so as to alter the manner in which Congress procedurally counts the electoral votes – with advocates of the bill proclaiming it can avoid future incidents akin to the January 6 incident at the Capitol.

Speaking from the Senate floor on September 27th, McConnell said of the Presidential Election Reform Act, “I’ll proudly support the legislation, providing that nothing more than technical changes are made to its current form,” adding, “The chaos that came to a head on January 6 of last year certainly underscored the need for an update.”

Mainstream media outlets have opted to jump on the language used in Trump’s social media post as potentially being dangerous, with CNN referring to the post as raising “the specter of political violence.”

Trump spokesperson Taylor Budowich has responded to such claims regarding the former president’s choice of words utilized in the social media post, calling the characterization of Trump’s language being dangerous as “absurd.”

In Budowich’s statement addressing the outrage over Trump’s Truth Social post, he opted to also invoke the same language, telling NBC News, “Mitch McConnell is killing the Republican Party through weakness and cowardice. He obviously has a political death wish for himself and Republican Party, but President Trump and the America First champions in Congress will save the Republican Party and our nation.”

Through his wife…and his wife’s family, that have strong connections with the CCP, Mitch McConnell is being influenced to the detriment of the USA. What we need is a strong leader in the Republican Party…not a milquetoast who bends to the will of the Democrat party (and probably the CCP) at every turn.