"I wasn't surprised because another crazy story is coming from someone in that house."

SAN FRANCISCO, CA – One can get a very different idea of who House Speaker Nancy Pelosi’s husband Paul’s alleged attacker, 42-year-old David Wayne DePape, is depending on what news outlet they turn to for their information and updates.

For example, if one asks CNN, Politico, or the like, one would read that DePape was a right wing conspiracy theorist who followed QAnon, targeted Nancy Pelosi for her conflicting political views, and that he had not been acquainted with Paul.

However, if one takes the trickled out information released by different media outlets and puts them all together independent of mainstream media influence, a much less cut and dry portrait would be painted of DePape and the situation as a whole.

Around 2:00am Friday morning, DePape allegedly broke into the home of the Pelosis and shouted “Where’s Nancy?” During the alleged attempted kidnapping, Paul told DePape that he had to use the bathroom, to which DePape agreed. Paul called 911 from the bathroom, where he said his phone had been charging. Paul allegedly talked to dispatch “cryptically” while in the bathroom, saying that he didn’t know the intruder, but also that he was a “friend” named David.

MORE NEWS: Dr Reiner Fuellmich: The PCR Test Is the Cornerstone of Everything That Went Wrong With COVID

It was originally reported that Paul and David were both in their underwear when police arrived, but that statement has since been retracted. (KTVU said after reporting the above, “CORRECTION: An earlier version of this story misstated what clothing the suspect was wearing when officers found him.”) Police also originally said that there was a third person in the home that let police in. But that statement was also later retracted.

CNN later reported, and it was also written in the criminal complaint, that DePape was found to be in possession of “zip ties, tape, rope, and at least one hammer” when taken into police custody, as well as a “hit list” of other “targets.” Police have not disclosed the names found on the alleged hit list at the time of this writing.

AP News reported that DePape had created a blog that touted “racist and often rambling posts online, including some that questioned the results of the 2020 election, defended former President Donald Trump and echoed QAnon conspiracy theories.”

The blog, found at www.frenlyfrens.com, is said by internet sleuths to have been created September 8 of this year. Personal information in the creator’s registration sent users to a Pizza Castle in Kent, Washington, suggesting that the user wanted their real information covered. Another user, who said they lived near the Pizza Castle in question, went to the location and posted photos of a business building with a Pizza Castle sign, but with windows and doors covered as if the business was not operational. 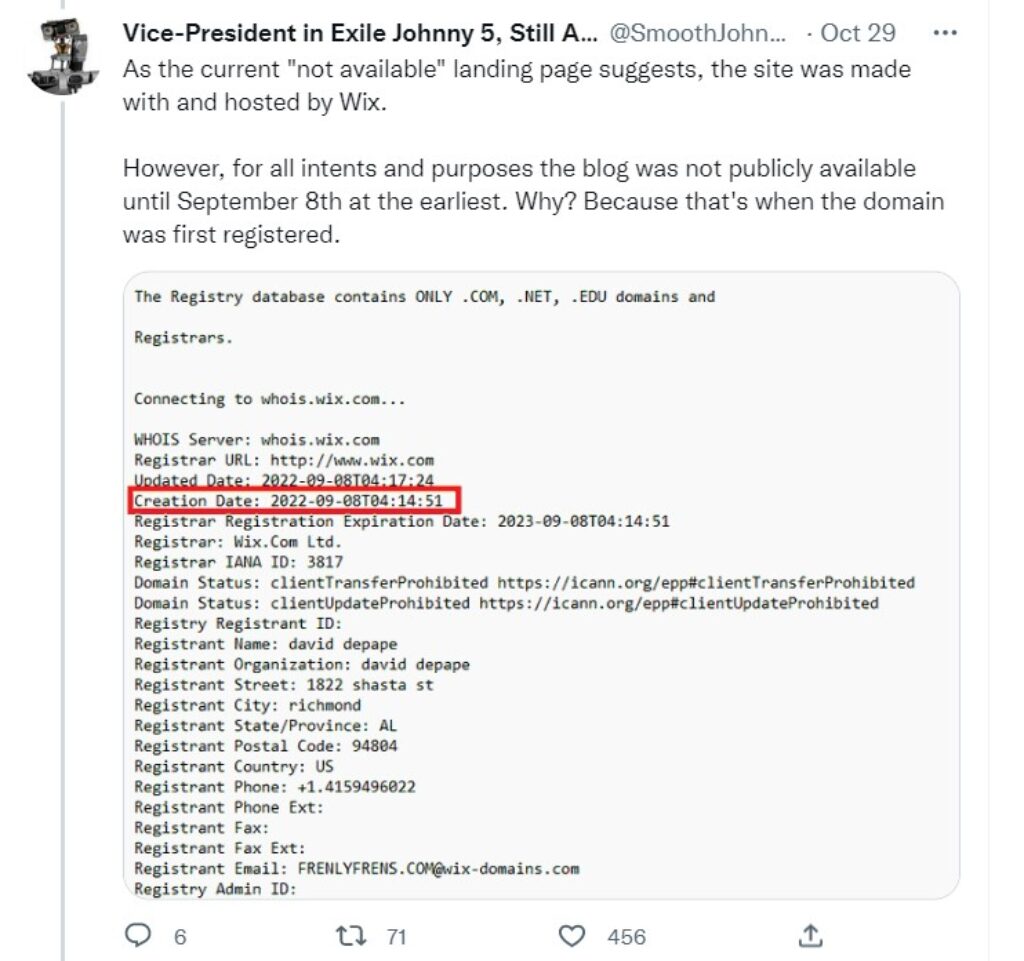 User CobraKel posted another long thread of information, saying that the blog that allegedly belonged to DePape had a paywall that literally no one had ever made it past. “The categories cover pretty much every whacky conspiracy topic,” he said, “and each category contains about 5-10 posts, which appear to be little more than a title graphic, a headline, and a small often nonsensical blurb.” Each page has zero views and zero comments.

DePape, who was a Berkeley resident and a hemp jewelry maker, was said by neighbors and a former partner to be part of a Bay Area nudist group, living in a place labeled as a “hippie commune” with a Black Lives Matter sign in the front window. His former partner, who is also the mother of his children, Oxane “Gypsy” Taub, said that DePape had always aligned with her political views, which she called “progressive.” She also said that she is a big admirer or Nancy Pelosi.

She also said that DePape has been “mentally ill for a long time,” and that he went missing for about a year some time ago. When he came back from that period of time, she said he was in “very bad shape. He thought he was Jesus. He was constantly paranoid, thinking people were after him. And it took a good year or two to get back to, you know, being halfway normal.”

On Saturday, Charlie Kirk tweeted, “Why did Paul Pelosi’s alleged attacker, a nudist Green Party activist, go off the grid for years and then start posting Q rants just a few weeks ago?”

Gypsy is currently in the Californian Institution For Women in Corona after being found guilty of 20 charges, including attempted abduction of a 14-year-old boy who she said she wanted to “date.” She and DePape have two sons and a daughter together and they split up about seven years ago.

“He appears to be a man who had long lived on the extremes of left-wing Bay Area society before descending down a rabbit hole of conspiracy theories spanning support of the notorious QAnon movement and 2020 election deniers,” Mercury News reported. Reuters stated they could not confirm who created the posts.

Police statements have said that they heard DePape shout “Where’s Nancy,” which led them to believe it was a targeted attack before searching his belongings. But DePape was in the home long enough to threaten Paul, let Paul go to the bathroom and call 911, and wait for the police to arrive. That timeline is questionable at best.

“This was not a random act,” the Chief said. “This was intentional. And it’s wrong.”

DePape is an illegal immigrant from Powell River, British Columbia who has lived in the United States for about 20 years.

State Senator Scott Weiner has said that he recognize Gypsie and DePape as a part of the nudist activist group. “The people around [Gypsy] creeped me out,” he said. “I’ve been aware of [DePape] for a long time because he was associated with the public nudity folks in the Castro. It’s a long history with him.”

Former neighbor Linda Schneider said that DePape had been a nice person who was kicking a drug habit, but then started using again and things went south. “I am convinced he fried his brains, and I knew it when I saw his writings,” she told Mercury News.

Ryan La Coste, another neighbor, told the New York Post, “I wasn’t surprised because another crazy story is coming from someone in that house.  They are always toxic and always up to something. They are always on the news and trying to be ‘activists.’ They always want to be in the spotlight.”

Nancy was in Washington, DC at the time of the incident. DePape allegedly told police that he planned on breaking Nancy’s kneecaps, but only if she “lied” to him.

There have been repeated social media calls for Nancy to release video footage of DePape breaking into her home, as presumably the third most powerful person in the country would at the very least have cameras if not a full security detail.

Paul went to surgery and is expecting to survive the hammer strikes to his head and hand.

So, who is DePape? A right-wing conspiracy theorist? A left-wing pawn of the federal government? A violent, drug-addicted, mentally ill nobody? The world may never know- just ask Ray Epps.

Don’t believe for one mon that this wasn’t a bum buddy party gone wrong,so someone answered the day as supposedly this man was attacking Pelosi,and why was he in his under wear all 3,the truth will come out eventually,nothing adds up and when thats the case we all know there lying

Dr Reiner Fuellmich: The PCR Test Is the Cornerstone of Everything That Went Wrong With COVID