“Most doctors by now have had four COVID shots — some have even had five.”

Ninety-three doctors have now recently fallen victim to sudden death in Canada — in which all of them occurred after the introduction of the Covid-19 injection.

“This is not just unusual. This is unheard of,” noted renowned health researcher Dr. Paul Alexander while speaking to Canadian physician and cancer researcher Dr. William Makis. So why is it doctors who seem to be most affected?

“Initially, there seemed to be a tremendous pressure for doctors to take the COVID vaccines,” explained Makis (earlier in the interview). “And most doctors by now have had four COVID shots — some have even had five,” disclosed Makis when speaking to Laura-Lynn Tyler Thompson on November 18.

So, when did this accelerate?

Dr. Makis told Alexander that the sirens went off after the first booster rollout:

This summer, we had the second booster rolled out, so the fourth shot. And then we saw a big cluster of deaths in July of 2022 — doctors dying left and right. And even McMaster University (in Hamilton, Ontario) came out and admitted that they lost three of their young residents, medical residents this summer — died at age 25, 27, and 32.

And so, Dr. Makis did some digging.

He collaborated with a group of people to put together a database, in which they discovered around 1900 doctor deaths of all causes over the past four years using the Canadian Medical Association’s website, royal college websites of medical schools, and other sources.

Doctors of all ages are dying at much higher rates. But once you start getting under the age of 50, you’re looking at double the mortality since the rollout of vaccines. But the younger you go, the higher the mortality is.

If you look at all the doctors under 40, it’s [a] four to five times increase in mortality compared to 2020 or 2019. And with the youngest doctors, doctors under the age of 30, so these would be medical residents, that jumps to eight times, eight-fold mortality compared to pre-vaccine rollout. And those deaths in those age groups are very, very rare. They were very rare in the past. And now they’re suddenly much more common. And that’s really a safety signal.

I personally would describe this as MORE than “a very serious safety signal.” If four to five times more doctors under 40 are dying, that’s not a safety signal. That’s a DEATH signal. And excess mortality is up across the globe. Our health officials, whose job it is to look at these numbers, should have been sounding the alarm long ago.

But as Ed Dowd says: 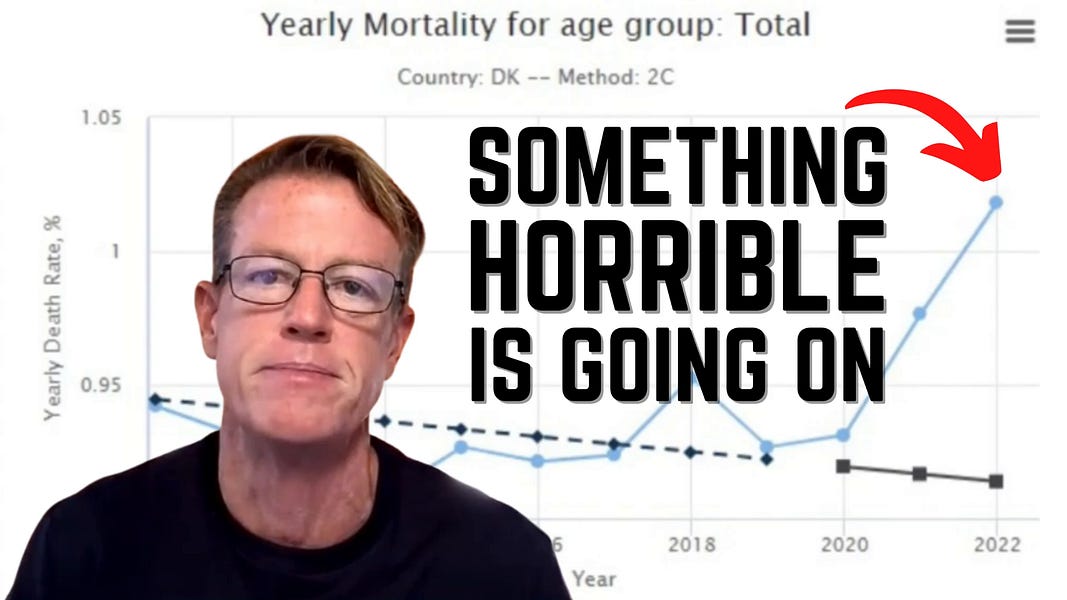 All the doctors that have taken the mRNA gene-modifier jabs will be dying; sooner or later. All the healthcare workers will be dying; sooner or later. So, who is going to be taking care of the remainder of Canadians?
Family members, who decided to live un-jabbed, will be the care takers for the rest of the adult and younger
generations.
Dr. David Martin brought out the reality of the situation; millions of people will have to endure the oncoming
responsibility of taking care of the very ill and dying; in the months and years ahead. You are it! The unvaccinated will have to suffer thru the care taking ordeal, until death, of family members, friends, and strangers.

If your goal was to reduce the population and eliminate those that are the biggest burden to the healthcare industry…..the sick and the elderly…..what better way than to reduce those that give medical care.

Everything is working per plan.

NOT according to one person who I know. That individual put it into perspective for me, recently. He KNOWS these predator killers, firsthand. His POV? Their plans are larger than life, misguided and always fail. I asked why he would think that, given humanity’s worldwide situation under their lying, murderous regime. His response?

“If their plans worked, we’d be dead now.”

Don’t know why, but I found that statement comforting.

If there are going to be fewer people on the planet, there should be fewer doctors, nurses, lawyers, teachers, professors, scientists, politicians, hedge fund managers and elites too. Depopulation should not discriminate.

3
Reply
tx is my user name
Reply to  WhiteBluecollarRedneck

You’ve lost your chance to complain when Trudeau survived the recall. Do you remember? Now live with it. I am not a doctor and I don’t play one on TV, but I certainly had enough sense to reject the vaccine when it was being forced down my throat. Now I am a blue blood.

7
Reply
WhiteBluecollarRedneck
Reply to  tx is my user name

tx, I’m not Canadian. My username implies that. But I agree with you on every other point. Btw, I am a put blood too, as is the entire family. Have you heard the latest? Elites are paying big money for our “pure blood”. In time, they will be hunting us.
Stay frosty.

There’s no pure blood,as far as you ever take any type of jabs

Our DNA have been altered,sad 😭

MP’s and the Senate need to call a No Confidence Vote against Trudeau and Singh. This coalition was entirely illegal and not voted in by Canadians

Guantanamo bay is waiting for them

STOP the INSANITY!! They are literally killing us, and no one seems to care!!

Man Canada really screwed the pooch up there didn’t they? Gave the real gene altering medical experiment jab to all their medical personnel instead of the placebo like the elites in the US have been taking…

This entire global exercise was never about saving people. Don’t believe me? Ask the people who bank rolled this vaccine* nonsense. They are the same people claiming that the world’s population is, “unsustainable at current levels,” humans are destroying the planet. Is anyone expected to believe that they are going to try and maintain or increase the worlds population? Really?

What more do you need to know?

So sad to see so many educated people that are so naive and stupid!
Most doctors have no diagnostic skills of their own with the possible exception of Osteopaths.
They should all have to take troubleshooting courses in computers or Telecommunication equipment.
And they have no idea what’s in the viles.
They just fall in line and do as they’re told and push the shots on their patients.
For the first time ever that I remember (and I’m almost 60) they give them to pregnant women which is the opposite of how it used to be.