“It’s easy to take things out of context,” stated Bruce Y. Lee, Senior Contributor to Forbes. “Just because clinical trial documents indicate that those who received Covid-19 mRNA vaccines ended up having somewhat higher rates of respiratory syncytial virus (RSV) infections doesn’t necessarily mean that the vaccines will make you more susceptible to RSV infections,” he argued in this article: Take note that I am linking to his piece. This is something he did not do for the person he was trying to prove as “out of context” — me.

Bruce Y. Lee, MD, MBA is a systems modeler, computational/AI and digital health expert, researcher, professor, entrepreneur, writer, and journalist. Those are quite stunning credentials. It’s too bad his counterarguments were less than stellar.

MORE NEWS: COVID-19 Is Never Going Away and These People Will Never Stop Until They Are Made to Stop

“The Vigilant Fox” regularly posts anti-vaccination pieces with heartwarming, feel-good titles such as “Death Tsunami: “They Found a Way to Slow-Kill People With This” – Dr. Sherri Tenpenny” and “’Something Horrible Is Going On’: The Longer They Ignore It, the More Criminal It Is.” Yeah, those titles don’t sound like they are trying to stoke fear in anyone, do they? So, is it really that surprising that the Vigilant Fox would post on October 29 something with the rather alarmist title, “Evidence Suggests the COVID Shots Are Responsible for Soaring RSV Cases Throughout the U.S. & Canada?” 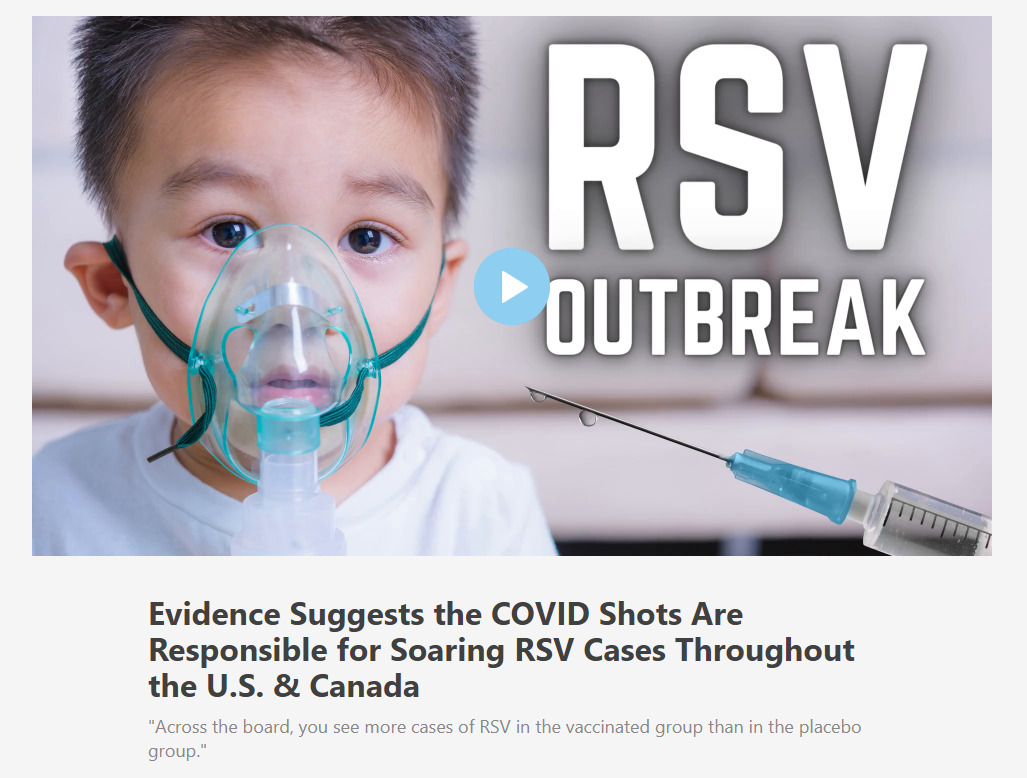 “So what exactly is this evidence mentioned in the title of this post?” he asks.

Well the Substack post pointed to several selected passages from the U.S. Food and Drug Administration (FDA) documents that described clinical trials results for the Moderna and Pfizer-BioNTech Covid-19 mRNA vaccines. One such passage indicated the following about the Moderna Covid-19 mRNA vaccine being administered to those from two to five years of age: “Within 28 days after vaccination, some respiratory tract-related infections were reported with greater frequency in the mRNA-1273 group than in the placebo group. Events of pneumonia were reported by 0.3% and 0% 0f mRNA-1273 and placebo recipients, respectively. Respiratory syncytial virus (RSV) infection was reported by 0.4% and <0.1% of mRNA-1273 and placebo recipients, respectively.”

Taken out of context, this passage may potentially make it seem like the Moderna Covid-19 mRNA vaccine (labeled as mRNA-1273) has been responsible for a higher incidence of RSV infections. However, 0.4% is still not that high, given how common RSV infections can be. Also, it is not clear whether those who had gotten the vaccine had engaged in other behaviors that may have put them more at risk for catching RSV such not wearing face masks, not social distancing, and not washing their hands.

Notice how he says, “0.4% is still not that high.” But you can’t have it both ways. If 0.4% is “not that high,” then what justifies the school shutdowns, learning loss of children, ruined businesses, shaken economies, lost jobs, and ruined relationships for an illness that accumulated 831 deaths per million (0.0831%) worldwide? “Also, it is not clear whether those who had gotten the vaccine had engaged in other behaviors that may have put them more at risk for catching RSV such [as] not wearing face masks, not social distancing, and not washing their hands,” Lee disputed.

If masks work, how do you explain these charts? Here’s a recent study from North Dakota that looked at two neighboring schools, one that enforced a mask mandate and one that did not. In the same Substack post, “The Vigilant Fox” pulled a second passage, also without providing appropriate context, that described the following about those in the Moderna clinical trial who were six to 11 years of age: “Within 28 days after vaccination, some respiratory tract infection-related PTs were reported more frequently in the vaccine group compared to the placebo group, such as Respiratory syncytial virus infection (0.3% vs 0%) and Upper respiratory tract infection (3.9% vs 2.5%).”

Thus, “The Vigilant Fox” kept beating the same drum, which, in turn, deserved a similar response. As with the RSV results from the Moderna clinical trial, the RSV case counts from the Pfizer-BioNTech were still relatively small numbers considering how common RSV tends to be. There were only a total of eight RSV bronchiolitis with only a two bronchiolitis case difference between those who got the Pfizer-BioNtech Covid-19 mRNA vaccine (labelled as BNT162b2) and those who got placebo. Not exactly Earth shattering stuff. Should this difference be completely ignored? No. However, many things could explain such small differences.

“Only a two bronchiolitis case difference.” It doesn’t sound like much when you frame it like that, but five is 66.7% greater than three. What if you enlarged the study and got those same results? 66.7% would be a very substantial number.

One of Lee’s subsequent statements misses the mark.

If folks like “The Vigilant Fox” want to learn more about the potential risks of Covid-19 mRNA vaccines, why not call for more funding of independent and transparent studies of the vaccines and provide no-strings attached funding yourself? Set up a Foundation as Bill Gates has or an organization like the National Institutes of Health (NIH) where you offer funding for studies but don’t have influence over what the studies say and what the researchers conducting the studies can say about the studies.

Do you mean that same Bill Gates who bragged about his 20-to-1 return investment and Fauci & the folks at the NIH who receive royalty payments?

“As officials slow-walk the royalty-data release, we can say that NIH and its scientists received an estimated $400 million in third-party paid royalties between March 2010 and today,” according to openthebooks.com.

I would not be one to label the aforementioned subjects as those who “don’t have influence.”

“Just because RSV cases have gone up recently doesn’t mean that vaccination is to blame,” he asserted.

And then he displaced that blame onto speculation.

Covid-19 precautions such as face mask wearing and social distancing may have helped keep RSV at bay for the past two Winters. As a result, younger kids, meaning those less than two years of age, may not have been exposed to RSV before this current season, meaning that the cases being seen now may be more of an accumulation of cases that would have normally occurred over a two-year period. Moreover, people may be going a bit overboard with the social interaction stuff these days, abandoning Covid-19 precautions as if they were soiled underwear and doing things such as “revenge travel.”

Again, we already showed hardly a discernable difference with the masks. And “revenge travel?” Come on.

The Highwire and I cite statistics from Pfizer and Moderna’s clinical trials; Lee cites his own hypotheses.

For someone with such strong credentials, Lee fought back with weak arguments. Bruce is a very-credentialed writer and highly intelligent, but this article, this particular piece, is unhinged, derogatory, and devoid of anything resembling journalism.

Masks don’t work but oxygen does. Just like Co2 is a nutrient oxygen is scavenger which burns up viruses.

Yes it’s true, turns out it literally burns them up like fire kills ants. And the opposite is also true, germs and bacteria thrive in low oxygen environments. Nasty! And this is the reason why there are so many diseases, ailments and chronic health problems today. It’s because our bodies are starved for oxygen.

awesome!! You know you’re doing good work when Forbes is tasked with a hit piece to try to discredit you!

WOW. Well, I hope the Dirtbag Demonrats keep right on taking their “boosters” and keep on lying & denying about why they all keep dying. POETIC.

Seems to me Mr. Lee might have a conflict of interest somewhere… He is way too forgiving of the narrative lies that we were told. Since he has the fullest confidence in the pharmaceutical companies he needs to be sure to take each and every booster, flu, shingles, monkey pox vaccine there is and wear 2 N95 masks….