The White House was recently fact checked by a Musk-controlled Twitter, causing them to delete a flagged tweet presumably posted by Joe Biden.

On Wednesday morning, the White House Tweeted, “Seniors are getting the biggest increase in their Social Security checks in 10 years through President Biden’s leadership.” The post was quickly flagged, with users indicating “additional context” was needed to clarify that the increase in pay amounts was actually due to a 40-year inflation high.

Next year, people will begin to see their cost-of-living adjustment for Social Security benefit increase by 8.7%, the biggest since 1981. Payments are calculated base on the Consumer Price Index for the previous fiscal year. 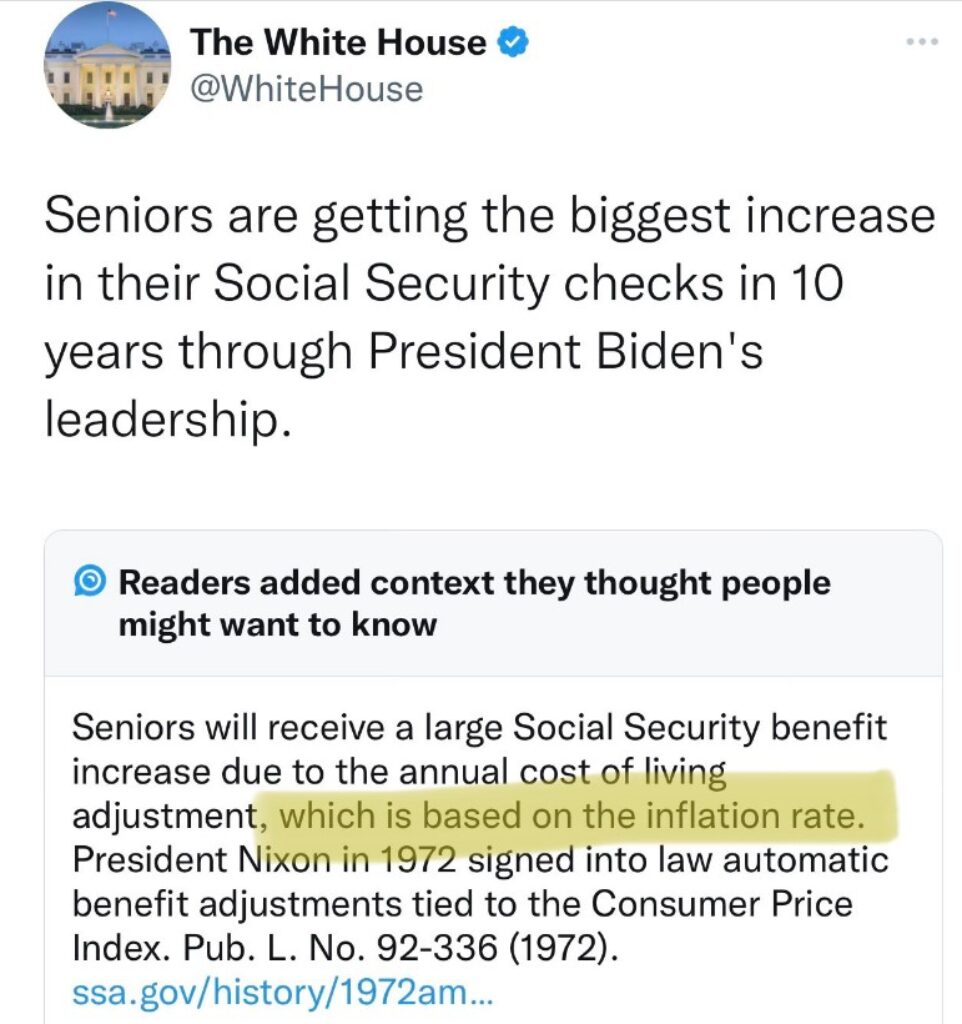 “Look, the tweet was not complete,” said Karine Jean-Pierre when asked about its removal during a Wednesday afternoon press conference. “Usually when we put out a tweet, we post it with context, and it did not have that context.

In just a few of the most recent tweets at the time of this writing, there were claims made by the White House Twitter account that were just statements, without this context Jean-Pierre spoke of. 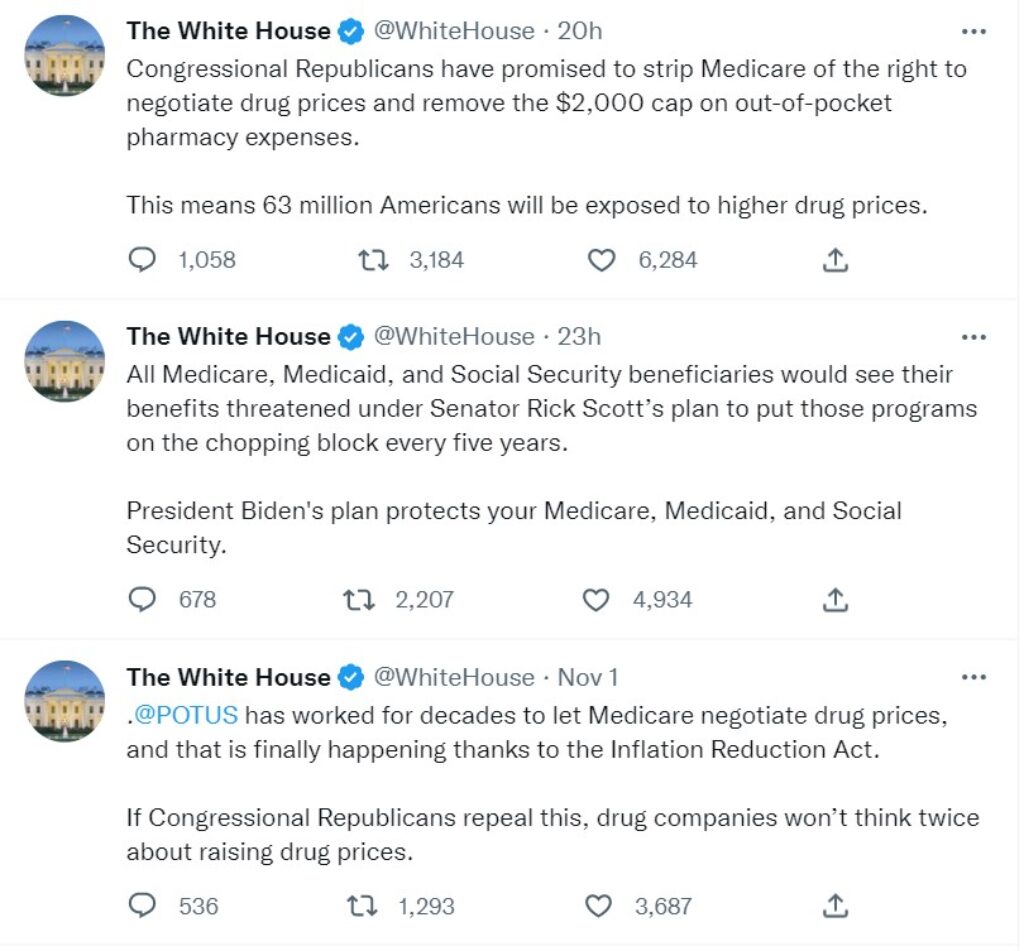 Of course, there’s this tweet with the dramatic- and false- meme that says Congressional Republicans want to eliminate Social Security and Medicare. This goes hand-in-hand with their statement published on the White House website that insults Republicans and lacks- you guessed it- context. 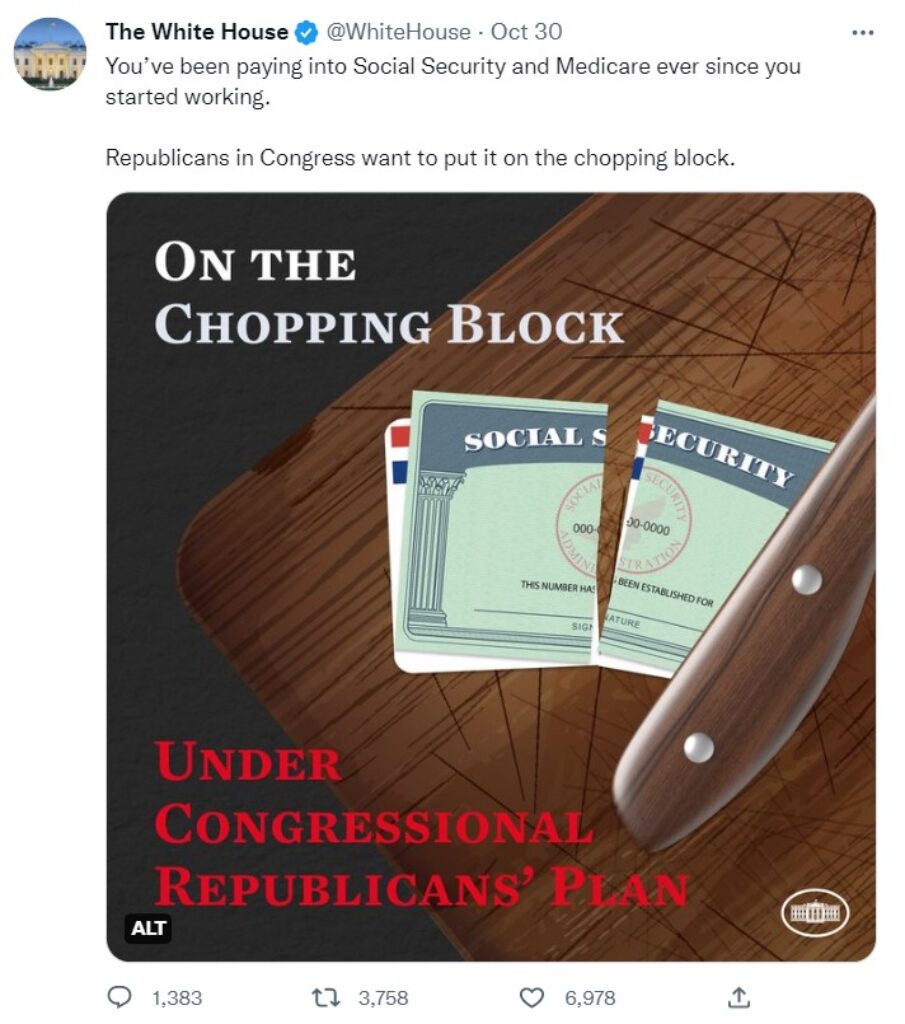 Regarding the “context” feature on Twitter, Musk tweeted, “The community notes feature is awesome. Our goal is to make Twitter the most accurate source of information on Earth, without regard to political affiliation.”

Fox News reported, “The White House did not immediately respond to requests for comment about why the tweet was deleted, or whether the White House is under any obligation to preserve all of its tweets and other social media messages for the record.”

In his own tweet, Kentucky Representative Thomas Massie said, “Biden social media geniuses are giving Biden credit for the biggest Social Security COLA in 10 years, but neglect to mention that SS COLA is an automatic formula based on government inflation metric (CPI).”

On Tuesday, Biden gave a speech in which he said inflation was a worldwide problem caused by the war in Iraq, which he corrected to the Ukraine war. He also falsely claimed in another speech, “price inflation is down, real incomes are up, and gas prices are down.”

Last week, the RNC research posted on a press conference with Biden. They wrote: “REPORTER: ‘Given record inflation, why should voters choose Democrats?’ BIDEN: ‘Because it’s not record inflation anymore. I’m bringing it down. Look at what we inherited.’ Inflation was at 1.4% when Biden took office. It’s now at 8.2%. Vote accordingly.”

Senator Bill Hagerty tweeted, “In Biden’s economy, 40-year high inflation is pinching the wallets of Americans every day when they go to the grocery store, fill up their tank, and pay their energy bills. Families continue to struggle, and the President continues to ignore it.”